For many years, ARM has relied on the concept that energy-efficient low-end CPU cores and powerful high-end CPU cores are used in a single chip. After Intel, AMD could now work on such SoCs.

As seen in the patent filed by AMD in the US, at least the concept of combining “small” and “large” CPU cores in a single processor is already visible. AMD will take the same approach as ARM with its “big.LITTLE” projects and now Intel with its recent SoC.

The advantage of combining processor cores of different capacities in a single microcircuit is, in principle, easy to explain: during normal operation, less powerful cores take on simple tasks, while high-performance cores are turned on only when needed and then provide significantly more power. ,

In this way, power consumption can be made much more flexible, especially with mobile chips, to naturally extend battery life. As mentioned, this is still just a patent that describes how a “high-end processor” and a “low-functionality process” can each be implemented with its own L1 cache and shared L2 cache. 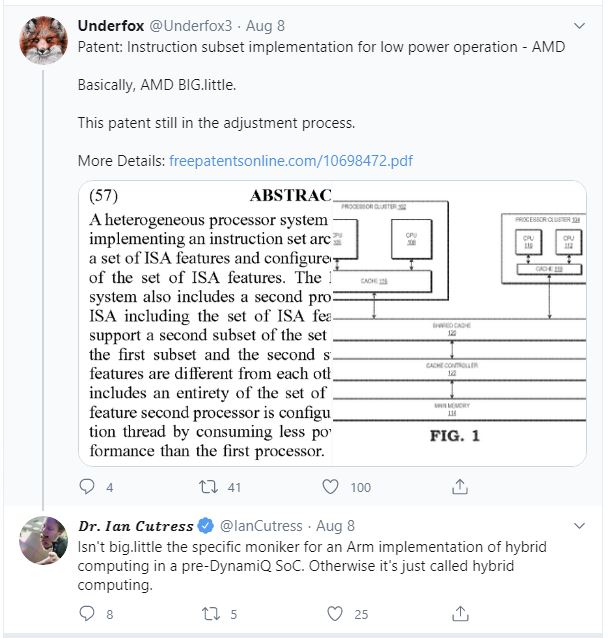 The patent was filed by AMD in 2017 but was not published by the US Patent Office until the end of June. It is currently completely unclear whether the company has specific plans for the introduction of such chips, which may take place in the near future. In general, it should be borne in mind that the use of patents does not always lead to the development of finished products.

ARM and its licensees have been using chips with a combination of large and small computing cores for about 10 years. Intel is starting to do this these days in order to equip a large number of mainly small mobile devices with it in the long term.