Apple was the first manufacturer to officially announce a 5-nanometer chipset with A14 Bionic chip. This apparently prompted the Xiaomi and Redmi marketing team to also tease smartphones with chipsets in the 5 nm process for the near future. Everything is still vague, but it could affect the expected Redmi K40 Pro. On Weibo Lu Weibing and the Realme marketing boss said that, of course, Xiaomi and Realme will soon launch smartphones with 5nm processors

Usually, Huawei and Apple argue about who will be the first to enter the market with a new manufacturing process. The first 7nm processor appeared in around 2018 with the name Kirin 980 and Apple with the Apple A12 Bionic announced themselves. Yesterday Apple announced the first 5nm chipset, the A14 Bionic should be the first to ship in the iPad Air 4 in October.

Colleagues from MediaTek and Qualcomm will also soon release their flagship chipsets for 2021. We expect Snapdragon 875 from the Americans, but probably not until December when it will ship in such smartphones in early 2021, Mi 11 from Xiaomi, Galaxy S21 from Samsung (probably not in Europe), or maybe already in Redmi and Realme phone.

On the Chinese Social media Network Weibo Xiaomi President Lu Weibing and Realme marketing boss said that, of course, Xiaomi and Realme will soon launch smartphones with 5nm processors on the market. At Realme, if you look at the teaser below, it will probably be a smartphone from the Realme V or Realme X series. At Redmi it could be the Redmi K40 Pro, which appeared a few weeks ago, as DigitalChatStation on Twitter suspects.

READ ALSO:   How much more expensive games for the Xbox Series X and PlayStation 5? 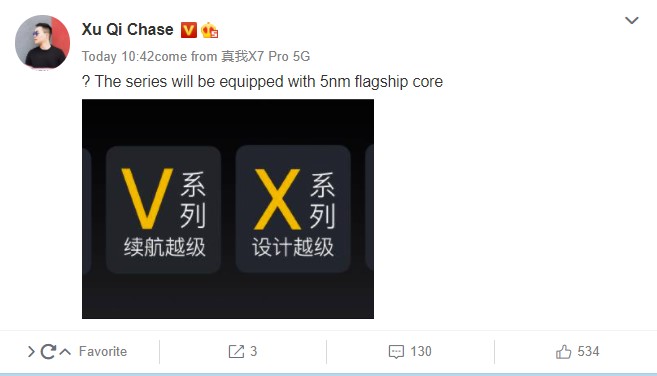 The flagship phone from the Xiaomi wood class, which tends to be somewhat cheaper, should be planned with a Snapdragon 875, large battery, high wattage, and camera sensor with large pixels. But then probably not until 2021 and not as early as 2020, as was recently rumored. At the moment, however, all of the information is not yet backed up by any evidence, so none of these rumors and teasers should be taken too seriously.

Microsoft 365: Attackers can break the authentication