In terms of the self-driving experience, Tesla’s autopilot has received praise from car owners. But even Tesla itself cannot say that it has achieved completely autonomous driving.

When using the autopilot feature, the owner and driver must still be aware of the road conditions in order to take over the vehicle.

However, overseas drivers always have big intentions, ignore potential risks, and turn their vehicles over to autopilot. The Canadian is still hardcore. After turning on the autopilot, he immediately fell asleep in the car.

According to the police, they received a complaint that a Tesla Model S was speeding at over 140km/h.

However, the driver cannot be seen outside, and the seat on the driver’s side is also down. The driver seems to be sleeping. 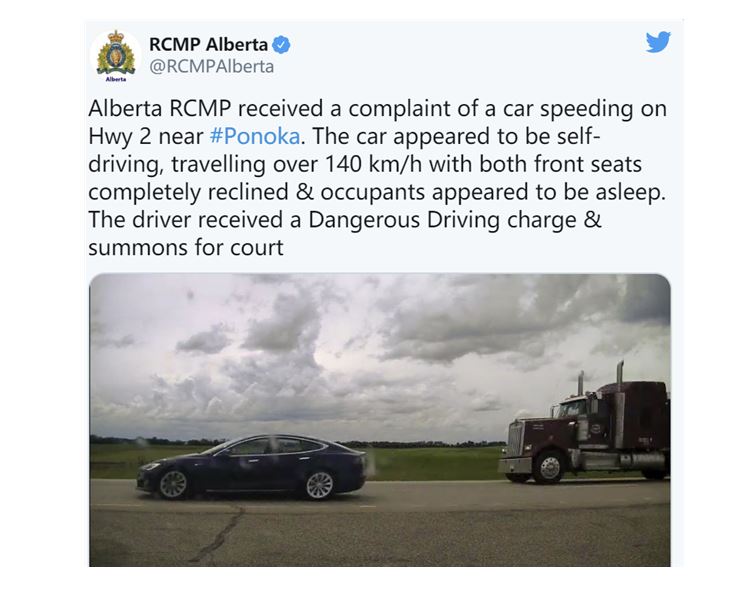 Later, the local police also sent patrol vehicles to follow. According to the report given by the police, there was a strange scene in this Model S with Autopilot turned on.

According to the speed radar, the police officer confirmed that the Tesla automatic car automatically accelerated to 150km/h, far exceeding the upper limit of the speed limit.

Finally, Tesla stopped and the police issued a speeding ticket to the driver.

However, after confirming the illegal behavior of the man sleeping in the car while using the Tesla Autopilot function, they decided to prosecute the driver for dangerous driving. The police have filed criminal charges against the driver.

In fact, Tesla has been exposed to many traffic accidents caused by the Autopilot function.

On June 1st of this year, on a highway in Taiwan, the owner’s Model 3 with the Autopilot function turned on, the vehicle rammed straight into a white truck that overturned in front.

This incident also caused many consumers to question the safety of Tesla Autopilot.

After all, it is not easy for Tesla to recognize white stationary objects, and it is no longer a secret for car fans.

Then the question is coming. At present, on the highway, do you dare to let Tesla’s Autopilot function completely drive the vehicle for you?

China fired for using iPhone and forced to buy Huawei

Jim Ryan: PlayStation 5 is not backward compatible with PS1/2/3 games