Microsoft has not yet commented on the situation

A user on the overseas forum 4chan released a document claiming to be the source code of WindowsXP with a total volume of 43GB. At present, the source code has been widely disseminated and Microsoft has not yet responded to this.

Despite the fact that support for Windows XP ended 6 years ago. It is still used on a large number of both home computers and industrial equipment. But with today’s leaked Windows XP source code many users both private and corporate will be thinking hard about continuing to use it.

Some independent security researchers have begun to study the code in-depth and talk about its accuracy and believe that it can withstand scrutiny (Microsoft has started to share the XP system source code with university researchers, government agencies, etc. ) 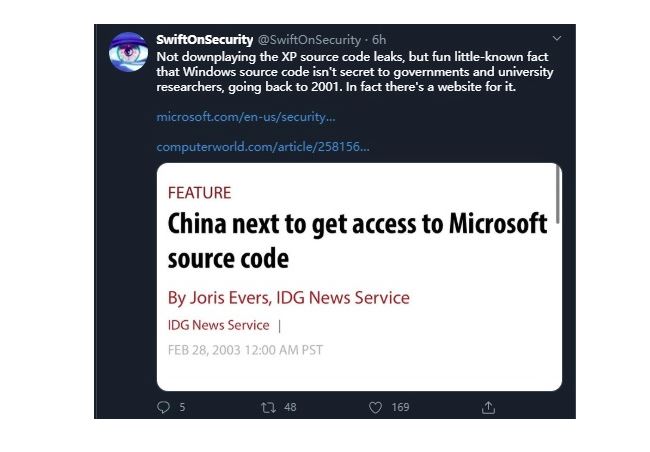 According to the source, the OS source code was published on the American forum 4chan. And later it was posted on the Mega cloud service. Independent experts have already analyzed the code and confirmed the authenticity of the data but Microsoft has not yet commented on this data. The leaked thread on 4chan was active for about four hours, after which it was sent to the archive.

We do not share leaks. However, you're free to try the method suggested in this attached image. pic.twitter.com/MwQYAvNTpK

Hackers and developers alike have different uses for the Windows XP source code. Some may start looking for new security holes (and they will surely find them). While others may introduce support for modern hardware into an old OS. It all depends on the goals and aspirations of a particular person.

Judging by the screenshot above, the leak contains not only the source code of Windows XP but also other Microsoft operating systems. Among them:

In addition, the code publisher is suspected to have released a 2.9GB Windows Serer 2003. The leaker also stated that, in fact, the source code of Windows XP has been privately transmitted between hackers for many years but it was released publicly for the first time today.

Taskboot learned that the Windows XP operating system was officially released on October 25, 2001, and the name “XP” means Experience. On April 8, 2014, Microsoft terminated its technical support for the system. But after that, it still released patches for the system during some major computer security incidents.

The leak also mentions Windows Serer 2003. Interestingly, according to rumors, among hackers, the source code of Windows XP is not new for a long time, but its public release was recorded for the first time.