Microsoft is working to ensure that storage hardware failure on windows 10 no longer unexpectedly hits users. The operating system must now alert the user before the storage medium refreshes the temporary.

For now, the new feature only works with NVMe SSDs. It is not yet known if SATA SSDs and hard drives will be included in the future. Microsoft, at least in its announcement, no longer addressed this issue. If this is planned, much more needs to be done because the information needed here just looks different and sometimes is not available at all.

The still available lifespan of SSDs, in general, can be assessed quite well. At least when it comes to the effects of normal wear and tear. Memory cells can only withstand a limited number of writes, and the number of defects increases over time. The shelf life data is also justified by the manufacturer on this basis. In the future, Windows 10 will receive information about the current state of memory cells from the integrated controller and then estimate the remaining storage time.

If a certain point is not reached here, the user is warned. He will then be asked to back up his data and take care of replacing the memory. Of course, it can happen that real problems do not arise so quickly. But the risk of massive data loss increases significantly towards the end of the life cycle.

Additional information is displayed to the user in the information window about the drive status. Among other things, the system also shows how long the service life remains. According to the manufacturer’s information, and how high the ambient temperature is. Anyone looking at this on a regular basis should get an idea of ​​when is the best time to do some more intensive work with their own storage system. The new feature is first seen in Windows 10 Insider Preview Build 20226. That was released yesterday. 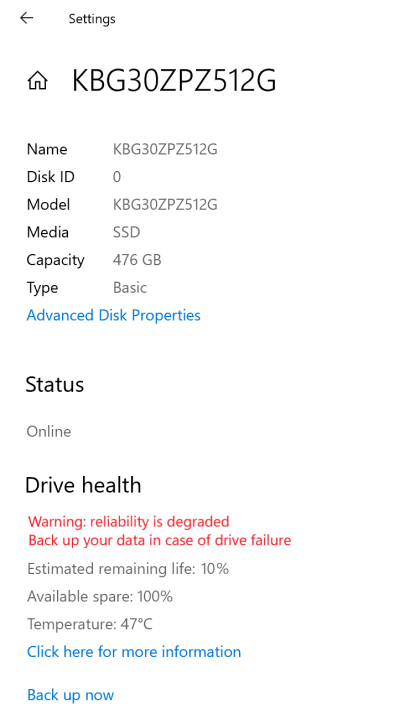 Another optional update for Windows 10 2004 fixes a standby bug

Just a few days ago, Microsoft released an optional update for the current Windows 10 May 2020 update. Now another cumulative update with new bugfixes follows – this also addresses a problem with standby mode.