With the update of firmware version 10.0.0, Nintendo Switch has acquired two important new features. Therefore, users of hybrid consoles will benefit from more possibilities for outsourcing games to SD cards and adjusting the button assignments of Joy-Cons and Pro controllers.

If this does not happen automatically, owners of Nintendo Switch and handheld Nintendo Switch Lite can now trigger the download of software update 10.0.0. The new firmware provides important improvements in the area of ​​memory and software management.

It is now possible to change the location of downloaded games, DLC and applications in the future. Move the game from the internal storage to the microSD card and vice versa. The various update files are still stored directly in the Switch’s memory.

Nintendo has also changed the button assignments for all Joy-Con, Switch Pro controllers and Switch Lite’s permanently integrated buttons. The remapping feature allows up to five controllers to be assigned a personalized button layout that is saved directly on the console and then available to all players.

Therefore, the user can change the “preset” according to the game situation, or usually adjust the assignment of buttons and analogue sticks. A popular change may be to change the A and B buttons, for example, to fit the layout of the Xbox One wireless controller.

Last but not least, Nintendo can now create up to 300 bookmarks for internal news so that even after a long time. Fans of the new Animal Crossing: New Horizons game can also look forward to six new icons that can be selected for their avatars.

However, if you are currently looking for Nintendo Switch, you will have to wait patiently. Because the demand is particularly high due to the Coronavirus Crisis. However, the stores of well-known online stores are gradually filling up.

Although the conversion title “Animal Crossing: New Horizons” has not been officially released in China before, Chinese authorities have made acquisitions more difficult. It is said that some players associate the game with the protests in Hong Kong.

The Chinese regime has been demonstrating in Hong Kong for a year. Due to the corona crisis, protests have now basically been transferred to the Internet. Now, some players have used Animal Crossing: New Horizons to spread their views on political and social issues. In the Nintendo game, you can design your own island and invite other players to join the island. 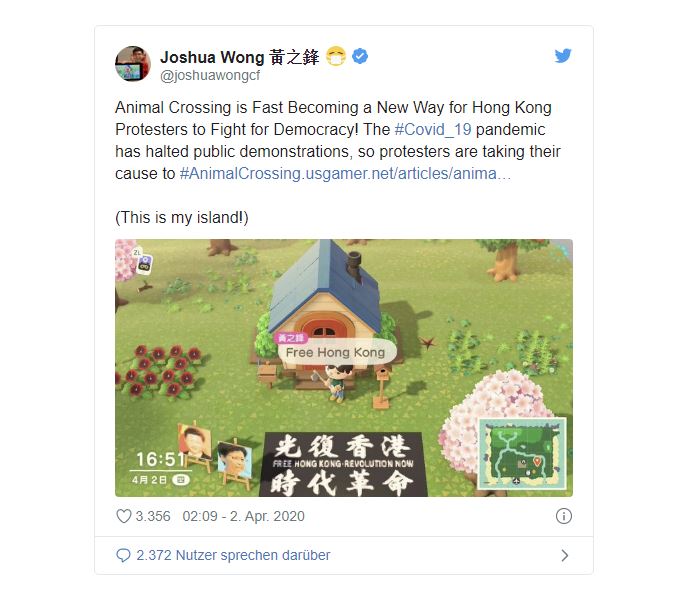 Activist Joshua Wong shared a screenshot of his island on Twitter. Here, Hong Kong needs freedom and demands a revolution. It’s no surprise that the Chinese government doesn’t like this kind of activity at all. Although “Animal Crossing: New Horizons” has never appeared in China, a copy of the Switch title can be easily imported.

Authorities have now declared war on the game and have largely prevented imports. Since “offensive content” can be found in the game. A rule has been enforced that prohibits merchants like Taobao from selling imported copies.

Can still be downloaded initially:

Although the physical version of the game is no longer available, a digital version of “Animal Crossing: New Horizons” can still be downloaded. The area must be changed in Nintendo eShop. Connection to the Nintendo sales platform may also be restricted soon. In this case, players will have to use an unobstructed VPN service to enter the game.

iPhone 12 Design should be based on the iPad Pro

1 thought on “Nintendo Switch: the best features of the new firmware update”