Frequent protests and other actions in the United States forced Google to postpone the release of Android 11 Beta indefinitely.

According to the previous situation announced by Google, on June 3. It is planned to conduct a live broadcast in real-time. Which will present new Android 11 Beta features and problems that developers are paying attention to. As for when he will be released, the official did not mention it, just that this is not the time to celebrate. 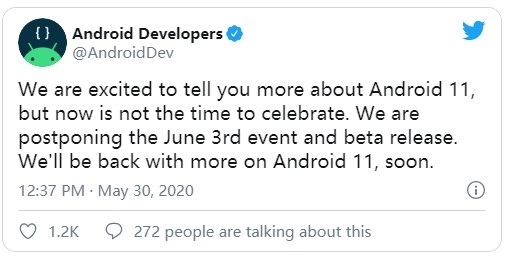 Unlike the developer preview, the Beta version will usually be adopted by the OEM, and it will be adapted for some models, such as last year’s Xiaomi, Vivo, OnePlus, Nokia, etc. In other words, maybe you will see Android 11 based on next month. Beta MIUI 12 beta version is now available.

The most attractive part of this developer conference is that Google will announce Android 11 when the new system will have more opportunities to meet with you. And before they sent out the preliminary version of Android 11. Google will also be on the day of the conference. Let more third-party models to be updated to the new system as soon as possible.

New features introduced in Android 11 include: APIs for digging pits and screens of waterfalls, a new pop-up chat feature, a one-time location, permission to access the microphone and camera, and screen recordings reappear in the system. time, there is a brand new Motion Sense gesture that can pause music.

READ ALSO:   Can the Google Stadia platform withstand the Xbox One X? Tests show that quite