The latest news from Korean media says that although it entered the testing and certification stage of Apple from August, BOE will miss the first shipment of the iPhone 12. 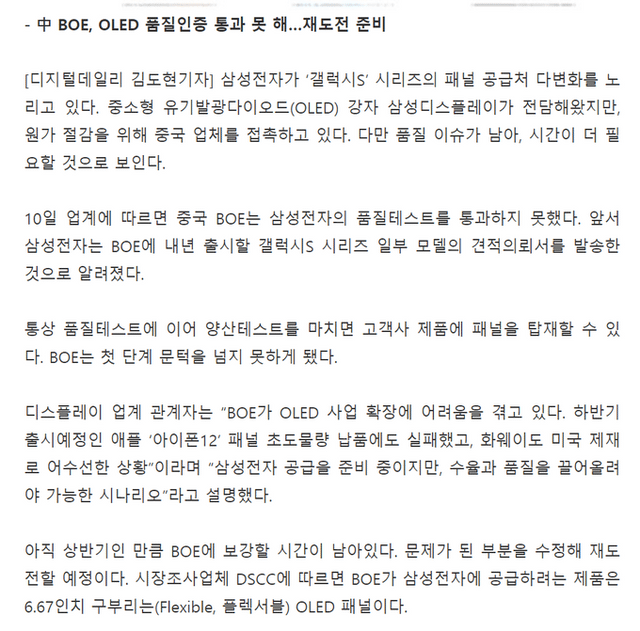 It is reported that this year Samsung will continue to occupy the bulk of shipments of OLED panels for the iPhone 12 series, at least in the first few lots.

BOE is currently the world’s largest manufacturer of LCD panels and is constantly expanding its OLED market share.

In fact, this is not the first time that BOE has broken into Apple’s industry chain. During these years, Apple Watch’s OLED panels are mainly made by manufacturers such as LG and BOE.

Of course, “The Lost East Sangyu Sangyu”, according to previous news, although Apple Watch Series 6 can not be launched MicroLED, but still BOE OLED, the possible reason is that the cost of MicroLED is still not ideal.

In addition, Apple will end the testing of the second batch of EVT verification machines in June and begin mass production of the iPhone 12 in July. However, due to the force majeure of the epidemic, the four models of the iPhone 12 series are large. The probability to adopt the strategy of listing in batches.

READ ALSO:   New iPhone pricing and layout may be a signal, Apple is not optimistic about the second half of 2020?

“Apple” suppliers claimed that this year’s situation is different.

Broadcom, one of Apple’s partners, hinted at what the Apple fans were so afraid of – the iPhone 12 release is likely to delay.

In late April, “The Wall Street Journal” announced that Apple will postpone the production date from July to September this year. This may mean that sales will be later than usual. In addition, according to company practice, the speech is likely to be held in September. According to the publication, the shift in sales beginning may cause a shortage of iPhone 12, because the demand for them will exceed the supply.

The main reason for postponing the launch of the new product line is the COVID-19 epidemic. For this reason, most of Apple’s factories in China have been closed for a long time. In addition, the new coronavirus affected the development process of the new iPhone. Because engineers had to lead Chinese colleagues to live instead of communicating via video due to closed borders.