Huawei today announced the official update schedule for EMUI 10.1 for Western Europe. This shows when which device will receive the upgrade to EMUI 10.1.

|Huawei confirms when the device will roll out the update

Today, Huawei published the “EMUI 10.1 Upgrade Plan for Western Europe Open Market 2020” on its website. For eleven devices from the manufacturer, this indicates the exact periods from which the update will be played. Huawei P40 Lite was already delivered in mid-May – in the end, the device appeared there only on the market. In late May, the EMUI 10.1 update was followed for the Huawei P30 and P30 Pro, and in mid-June for the Huawei Mate 30 Pro (for everyone). The upgrade process for Huawei Mate 20 X 5G has also begun. 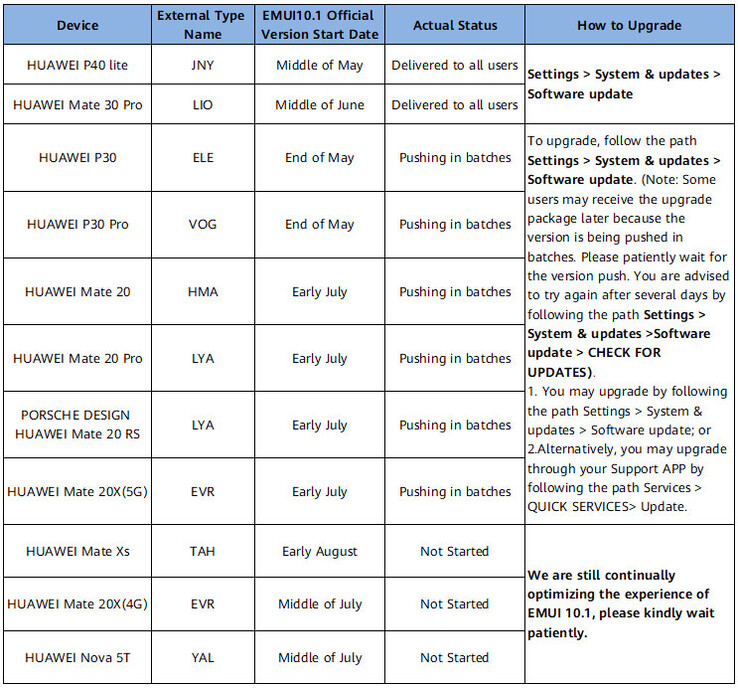 Here an accurate overview of the individual periods. If the update is not yet available on all devices, despite the start of distribution, this is due to wave-like distribution. Then just find Update on the device a few days later. It is important to note: the specified schedule refers to devices of the “open market”, i.e. without any settings for mobile operators.

READ ALSO:   How manufacturers of cases for Huawei P40 and P40 Pro failed

It’s about the time that devices received EMUI 10.1. Because in the fall, the new version of EMUI 11 is already in the starting blocks. But for the distribution of the new version of the Huawei operating system based on Android 11 on all devices, it will take some time.

The official website of the latest firmware update shows some new features that EMUI 10.1 users can expect. Inspired by Apple’s AirDrop and FaceTime, the manufacturer brought its own variants to smartphones in the form of Huawei Share and MeeTime. In addition, Windows PC also has a variety of multi-screen functions and can choose to transfer images to TVs, projectors, etc. In addition, Huawei also provided sound enhancers, improved gallery views, and new design themes for its models.

Apart for the update schedule of EMUI 10.1. Huawei confirmed the work on the new EMUI 11 a few days ago, which will appear in the third quarter based on Google Android 11. However, many users will have to give up important Google applications, and in the future, as the trade conflict between China and the United States continues, the Play Store will become a reality.