German online store Otto not only prematurely added a digital version of the new PlayStation 5 to its range, but also unveiled the first PS5 console with a 2TB solid-state drive. While the capacity pleases the players, the placeholder price is causing a stir.

In addition to the classic PlayStation 5, Sony will also offer the next generation console completely without an optical drive (4K Blu-ray) in the fall. Consequently, the ever-increasing number of downloads of PS5 Digital Edition games requires a lot of memory. Shortly after the official launch in June, the PlayStation community complained that the previously announced solid-state drive with a capacity of just 825GB would prove too cramped in this case. However, there are now indications that a PS5 console without a floppy drive will have significantly more SSD storage capacity.

On Otto’s online store, the Sony PlayStation 5 Digital Edition, including a 2TB solid-state drive, retails for € 974.79 or € 1,000. While cost is likely an empty space, it would be perfectly logical for the Japanese manufacturer to equip the digital version with larger flash memory. The rumor mill has already speculated about hardware upgrades in terms of SSD and random access memory (RAM). However, confirmation from Sony has not yet been received. 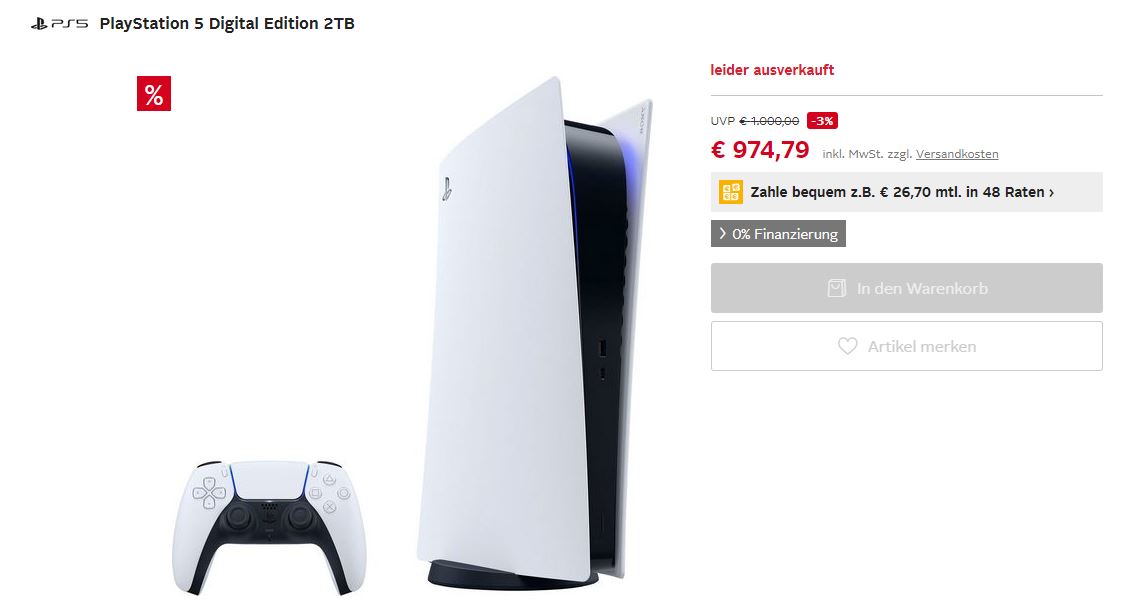 Sony could financially benefit from SSD upgrades, as the premiums in the gaming and tech industries are in most cases far above the typical purchase price of a larger memory. For convenience, gamers could take a PlayStation 5 with a larger capacity and thus easily curb Sony’s likely subsidized negative console sales business. In addition, the company has already announced that the PS5 can be expanded relatively easily with another NVMe SSD in the modern M.2 format by buyers themselves. Xbox Series X, on the other hand, requires proprietary SSD memory cards.

It remains to be seen if Sony will comment on the size of the SSD ahead of pricing and release dates. It has also not yet been determined if the 2TB PlayStation 5 Digital Edition will be available for selection at the start of pre-orders.