The ban imposed by the U.S. Department of Commerce not only affects U.S. companies

As we have reported, a few days ago, US President Donald Trump extended the decree signed in May 2019 by one year. The decree triggered an emergency in the country and prohibited US companies from using telecommunications equipment produced by companies that “endanger national security.”

According to sources, this time the United States is not only trying to cut off contact with US suppliers, but also trying to contact companies in other countries. The U.S. Department of Commerce said it is revising its export regulations. The “strategically targeting Huawei to acquire semiconductor products that are direct products of certain U.S. software and technologies.”

The rule change will hit the largest telecommunications equipment manufacturer and the second-largest smartphone manufacturer.  As well as TSMC, a leading contract manufacturer of semiconductor products, especially TSMC, which manufactures chips for Huawei ’s subsidiary Hisilicon.

Huawei is at the heart of China and the United States competing for global technological dominance. Earlier, the United States tried to persuade allies to exclude Huawei equipment from the 5G network, thinking that China could use it for espionage. But from the development of the incident, the measure was not effective enough. Huawei has always denied these allegations.

The US Department of Commerce stated that although Chinese companies were blacklisted in May 2019. Huawei continued to use US software and technology to develop semiconductor products.

Under the rule change, foreign companies that use US-made equipment to produce microcircuits must first obtain a license in the US before they can deliver their products to Huawei or HiSilicon.

The chips currently in production can be sent without a license but must be delivered within 120 days. The United States not only blacklisted Huawei but also blacklisted 114 branches of Chinese companies.

Huawei replaced the US sanction with a Chinese noun

Another “showdown” of Huawei’s flagship smartphone shows that the company must replace many approved US parts with parts unknown to China. The company was forced to take this step due to the protracted trade war between China and the United States.

Last year’s Huawei Mate 30 was demolished by Tokyo Fomalhaut Techno Solutions commissioned by Nikkei Index. It turns out that 42% of the total cost of Mate 30 components is borne by Chinese “parts”. Experts pointed out that this parameter is significantly higher than the parameters of the Mate 20 Pro (review) released by the United States before the sanctions imposed on Huawei in 2018. 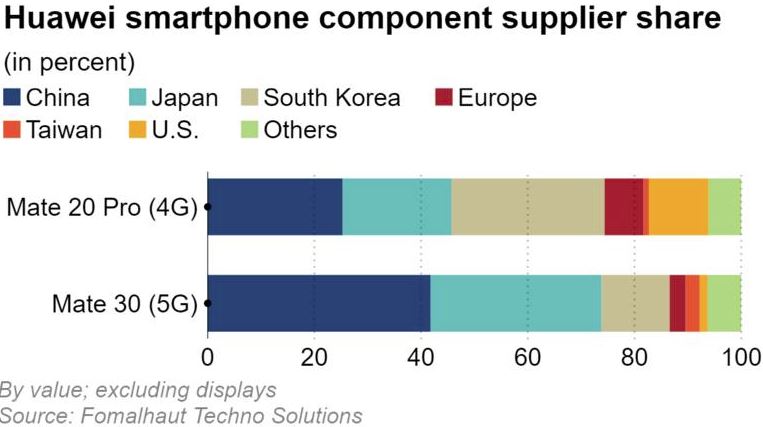 Moreover, some Chinese components cannot be installed by manufacturers, including body panels and touch panels. The United States “approved” ingredients account for only 1%. Previously, their share was 11%. 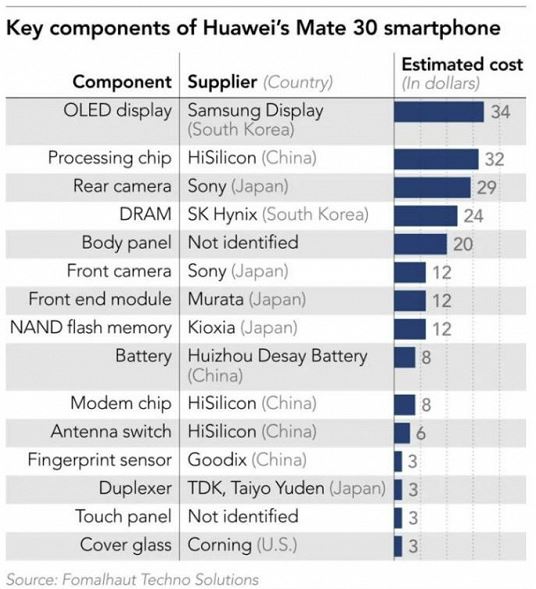 Apple should plan iPhone 2021 without any connections

READ ALSO:   Huawei is preparing a smartphone with a larger zoom than the P40 Pro
Tags: Huawei