Even more Ryzen from China: Leaks reveal the specs of the Huawei MateBook D and Honor MagicBook Pro

One can hardly deny that the AMD Ryzen Renoir offers excellent performance and is in many ways ahead of the competition. But so far APUs can be found in too few laptops. In the end, the leak discovers the technical data of two new Huawei laptops.it looks like the company is planning an AMD offensive.

The Honor MagicBook Pro 2020 was officially released in mid-May. But only with Intel Comet Lake U processors up to the Core i7-10510U. The laptop has not been available with Ice Lake or Ryzen Renoir, at least until now. If you believe in the famous Leaker @_rogame on Twitter. Huawei will soon introduce two new laptop configurations.

Therefore, the cheaper model comes with AMD Ryzen 5 4600H, 8 GB of RAM, and 512 GB of SSD. And the more expensive model combines the Ryzen 7 4800H with twice as much RAM and flash memory. Obviously, Huawei does without a dedicated GPU in favor of the integrated Radeon RX Vega 7 – since the company relies on slow DDR4-2666 RAM, iGPU performance may be somewhat limited. According to Huawei Central, the presentation of the new MagicBook Pro is expected on July 16th. 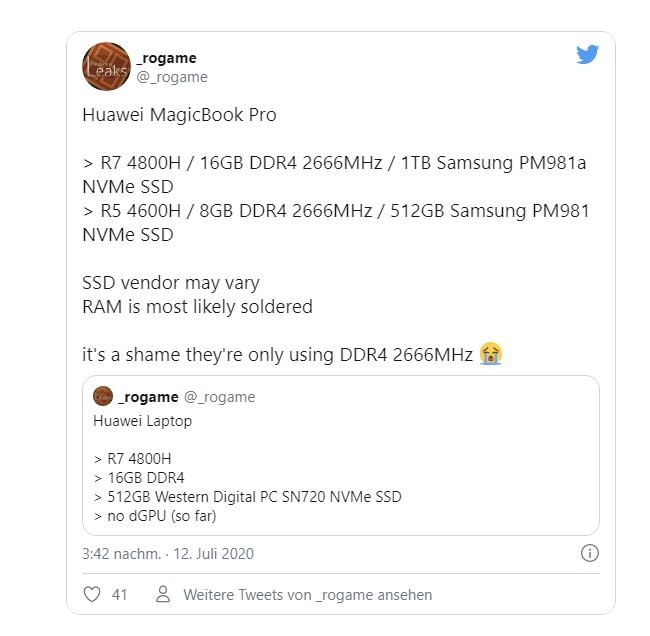 This MagicBook Pro has a 56W battery with 11.5 hours of local FHD video playback and supports 65W charging via USB-C Charging.

The laptop includes a built-in fingerprint reader at the top of the power button and a full-size backlit keyboard, touchpad and camera with hidden keys.

The Honor MagicBook Pro has 3 x USB-A 3.0, a 3.5mm headset and a 2-in-1 microphone jack. It runs on Windows 10 and is equipped with applications such as Huawei Share, One Touch File Transfer, Eye Comfort Mode, and Huawei PC Manager.

The AMD Radeon RX Vega 7 is an integrated graphics card for notebooks. It is located in the Ryzen 5 APUs, which were introduced in early 2020. The GPU is based on the Vega architecture (5th generation GCN) and offers 7 CUs (= 448 shaders) with up to 1600 MHz (e.g. Ryzen 7 4800H). The performance depends on the configured TDP (15, 35 and 45 watts at launch), the clocking in the model, the cooling and the installed main memory. The graphics card should benefit significantly from fast dual-channel DDR4-3200 memory (in contrast to possible DDR4-2133 single-channel).

The new Huawei MateBook D, which appeared in the 3DMark post, which can be seen on the @_rogame tweet embedded below, is at least as exciting. This model obviously comes with an AMD Ryzen 7 4700U, 512 GB NVMe SSD and 16 GB of RAM. But, as with the MagicBook Pro, the 2666 MHz RAM is pretty slow. 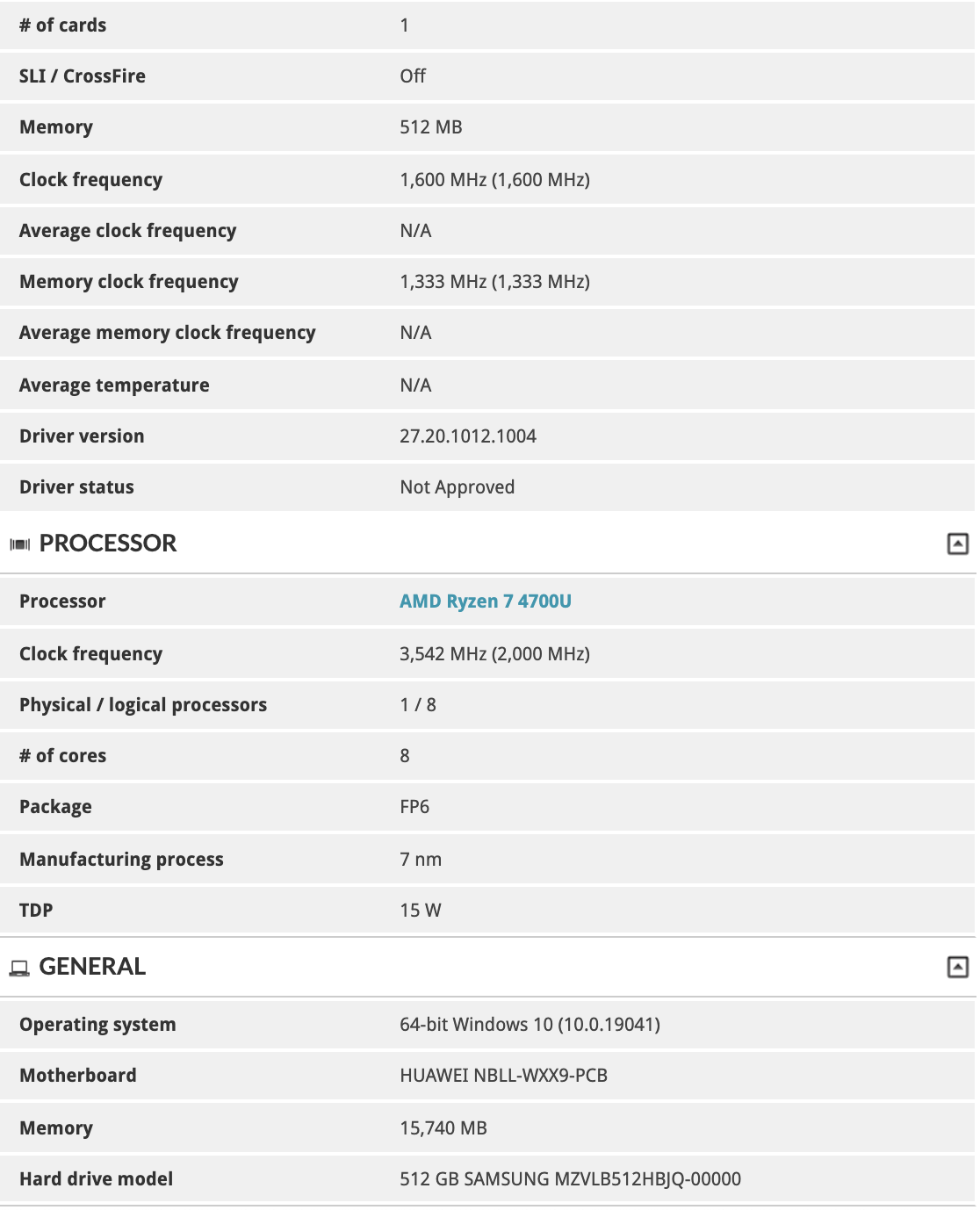 Apart from this 3DMark record, almost nothing is known about the new MateBook D, our detailed test of the current version of the MateBook D 14 has already confirmed that the laptop works well, not least due to good cooling – updating to the latest Ryzen version. A generation should give the laptop noticeably better performance.