As was already the case with the Galaxy S10, Samsung would also like to release a lite variant for the current Galaxy S20. Now the device has appeared on a benchmark page for the first time. In addition, some new specifications and the release period have been leaked.

In late June, we first announced the upcoming release of the Samsung Galaxy S20 Fan Edition. The affordable Galaxy S20 is the successor to the Galaxy S10 Lite (from € 490 on Amazon), which Samsung also added sometime after its flagship models earlier this year.

A few days ago, Leaker announced that the new smartphone, as expected, should not be equipped with the older Snapdragon 855 or the less powerful Snapdragon 765G. Instead, he should also get the current top-end SoC Snapdragon 865 card, which, at least in some regions, also supports other Galaxy S20 models.

Now it seems confirmed. Because the test results of the Samsung Galaxy S20 Fan Edition appeared on Geekbench. They occupy the Snapdragon 865 and also provide 6 GB of RAM. Unfortunately, the Geekbench record does not provide any further details.

Together with the Snapdragon 865, the Samsung Galaxy S20 Fan Edition should also support the new 5G mobile standard. In addition, Samsung is likely to make no distinction between the US and the global model. This means that we also benefit from the Snapdragon 865 in this country (model SM-G780), as well as the US model (SM-G781). We did not (as is the case with the Galaxy S20) “feed” the Exynos 990 or should be pleased with it. So Samsung dealt with the Galaxy S10 Lite. Rumor has it that the new 50-megapixel Samsung ISOCELL GN1 sensor will also be on board. 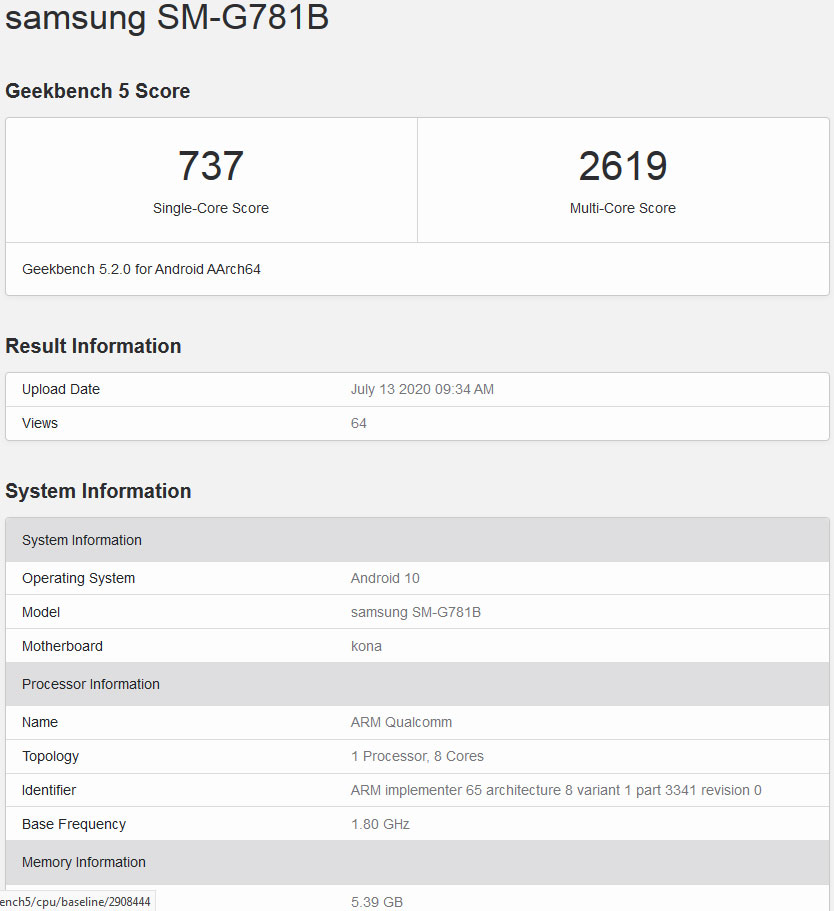 Samsung may also unveil the Samsung Galaxy S20 Fan Edition at the upcoming Unpacked event on August 5th. Market entry is expected in the fourth quarter. It will ship with Android 10 and One UI 2.5, which Samsung is likely to introduce with the Galaxy Note20. In terms of price, it should be approximately at the level of its predecessor and, therefore, about 650 euros, so it should position itself as an analog of the cheapest iPhone 12.

A tweet from “Ice Universe” shows that the Samsung Galaxy S20 Fan Edition should have a 120 Hertz screen. The selfie camera was allegedly housed in a 3.3-millimeter display hole. The smartphone should receive an IP68 certification and cost a moderate price. How expensive the Fan Edition will ultimately be remains open.

The slimmed-down model is expected to be released in the fourth and thus in the last quarter of the year. The Galaxy S10 Lite was only introduced in early January 2020. It is therefore likely that the Galaxy S20 Fan Edition will see the light of day in December. However, there is currently no specific date. Whether the corona crisis is influencing the launch and possibly still causing a shift remains pretty unclear at the moment.

@UniverseIce leaked more information about the Samsung Galaxy S20 Fan Edition. The device is said to be equipped with a 120 Hz display including a 3.3 mm punch hole for the selfie cam. The release is scheduled for the fourth quarter of 2020.