Samsung’s new foldable, the Galaxy Z Fold 2, is slated for release early next month. A recently leaked firmware already reveals a lot of information about the new flagship model. There are also further details on the smaller external display.

Famous Leaker Max Weinbach learned about this (via MSPoweruser). While there have been many leaks regarding the foldable internal display, there is little information on the external display yet. The names of the lines in the firmware, which leaked about three weeks ago, suggest that the front display has an aspect ratio of 25: 9 and an integrated camera with holes. The firmware also shows that the external screen can be used to use the main camera on the rear panel. This allows users to take photos without having to open their smartphone. 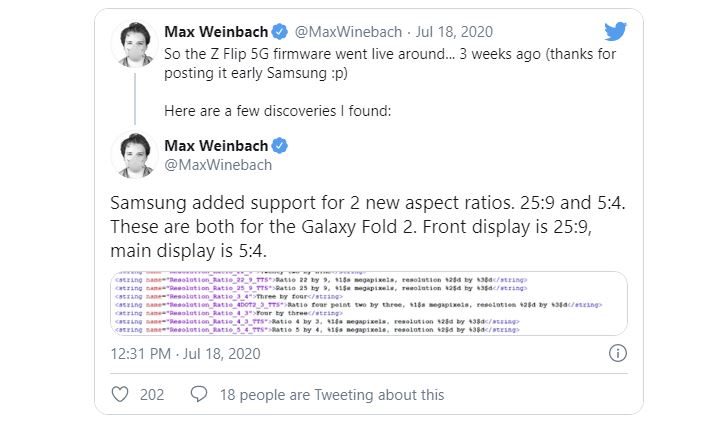 In addition, Max Weinbach found further improvements in the firmware. In professional video mode, users should be able to select the microphone used to record sound. With the Galaxy Z Flip 2, it is possible to record 8K video in 21: 9 format. The smartphone must be equipped with cover support and limit the display on the front display to a specific area once the device is surrounded by a protective cover.

In addition, you can also take selfies using the main camera, using the external screen as a viewfinder. In this mode with the device, the inner screen will be off.