The series of big data leaks does not end there. Now there is a 20GB archive that contains most of what might be called Intel’s gem. It is not known where the data came from.

Swiss IT expert Til Kottmann once again drew attention to their existence. The latter found the information in a file that was saved in the file sharing service. According to the author, this is “a previously secret version of Intel for the Lake platform.” It contains extensive code, documentation, and tools for all of the latest processor platforms that are not actually intended for the general public.

Intel has confirmed the leak to the American magazine TomsHardware. “We are investigating this issue,” said the chipmaker. Initial estimates are based on Intel Resource and Design Center. This is a platform to which the company provides access to partners and large customers. This is where PC makers get the data they need to, for example, design and manufacture Intel-based systems. 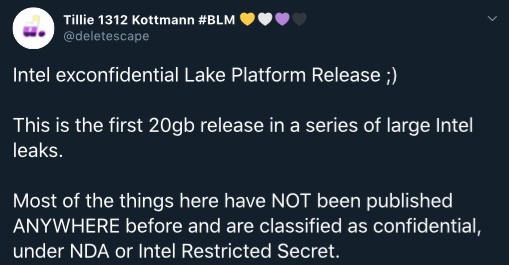 Swiss IT consultant Till Cottmann tweeted today a link to a file-sharing service containing what an anonymous source claim is part of the crown jewel of Intel: a 20GB Intel confidential intellectual property folder. The leader called the release “a closed Intel Lake Platform Release;)”.

The information appears to come from the Intel Resource and Design Center, which contains information for use by our customers, partners, and other external parties who have registered to access. We believe the person with access downloaded and shared this data. ”

The Intel Resource and Design Center is a website that provides company partners with NDA documentation for product integration. There are also reports that some files are marked with NDA licensing agreements with Centerm Information Co. Ltd., a Chinese company incorporated and operating under the laws of the People’s Republic of China “, which means that this company may also have been hacked,

The folder appears to have been originally hosted by an anonymous source who claims there will be new ones coming soon, and while we don’t know the exact characteristics of the folder’s contents, we’ve confirmed that it does exist.

The trail leads to China

Relevant information and data are subject to strict rules to prevent their disclosure. However, it should now be assumed that the leak occurred in one of the registered companies. The path here seems to lead to China. Some files in the data collection are licensed by the Chinese company Centerm Information Co. In addition to the possibility of data leakage by someone in the company. There is also the possibility that external attackers could gain access to data during an attack on the company.

It is possible that the 20 gigabytes that are now in the public domain have not survived. Because the publisher also left a message in the collection, according to which additional information should appear in the near future. What to expect here is not yet clear.

READ ALSO:   Intel announces Comet Lake-H mobile processors 8 cores, 16 threads and a frequency above 5.0 GHz for the Core i7 model.