The news appeared on the web regarding the release date and cost of the PlayStation 5 console, as well as accessories for it. And this news is global in nature: the console price is indicated for all markets.

According to the latest news from August 23rd, the Sony PS5 game console will launch in Japan on November 14th and begin shipping to other countries and regions on November 20th. 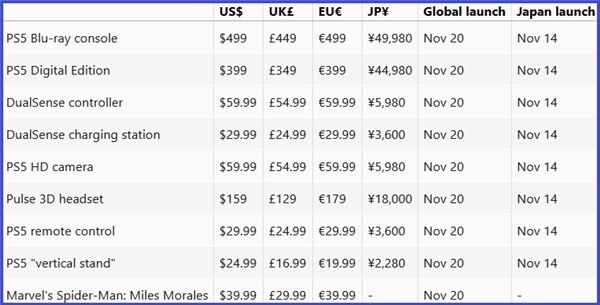 According to previously exposed news, the Sony PS5 has been greatly adjusted compared to the PS4. Its core will consist of 8 3.5GHz variable frequency Zen2 chips, while the PS4 is only a 1.6GHz Jaguar chip, so the game will be smoother.

The most affordable version of the console, which has already been mentioned many times, will be digital, that is, devoid of an optical drive. In Europe, they will ask for 400 euros, in the USA – 400 dollars. The optical drive version is 100 euros/dollars more expensive.

The most expensive accessory for the PlayStation 5 will be the Pulse 3D wireless headset, and in Europe, it will be significantly more expensive than in the US. But in Europe, a vertical stand will be cheaper. The game Spider-Man: Miles Morales, adjusted for the current exchange rate of the euro against the dollar, will cost about the same in the US and Europe

In addition, the PS5’s memory has been increased from the previous 8G to 16G, and its storage space has also increased to a custom 825GB.