After Intel gave a first glimpse of the technology behind Tiger Lake at Architecture Day 2020, all information about the 11th generation notebook processors, led by the Core i7-1185G7, is now available. Our preliminary benchmarks show that Intel may have caught up with AMD Ryzen. Together with the Xe LP GPU, one can expect excellent performance.

After an overview of the new APU, we started to compare performance. In comprehensive tests, the new processor can show an improvement that can actually be expected compared to Ice Lake. At this point, it should be noted that these benchmark results are determined by our sources using front-facing laptops.

Core i7-1165G7 is about 13% behind Core i7-10710U in 3DMark 11. This is also due to the fact that Tiger Lake chips are only equipped with four cores. Interestingly, Core i7-1165G7 beats Ryzen 7 4700U over Ryzen 7 4700U, and its direct Ice Lake predecessor Core i7-1065G7 has improved performance by 38%. The results of the 3DMark Time Spy CPU and Fire Strike Physics showed a similar trend, with the new chip leading by 59% compared with the previous generation. 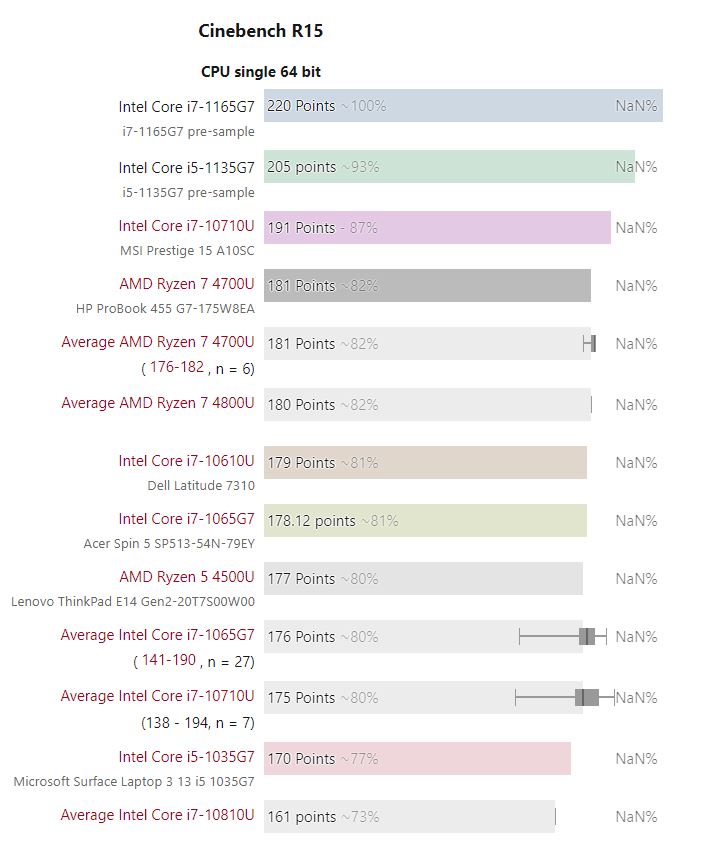 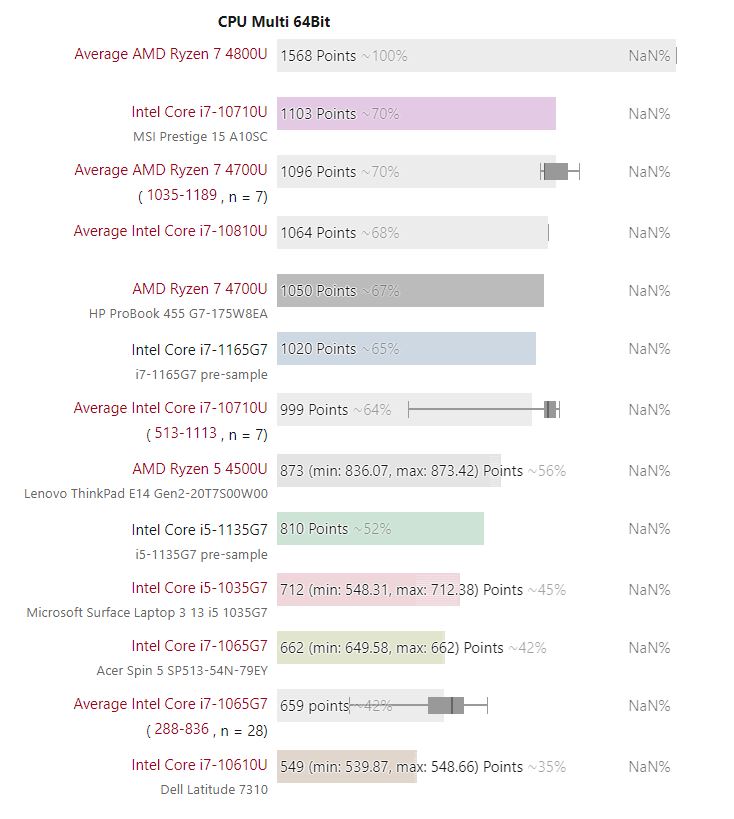 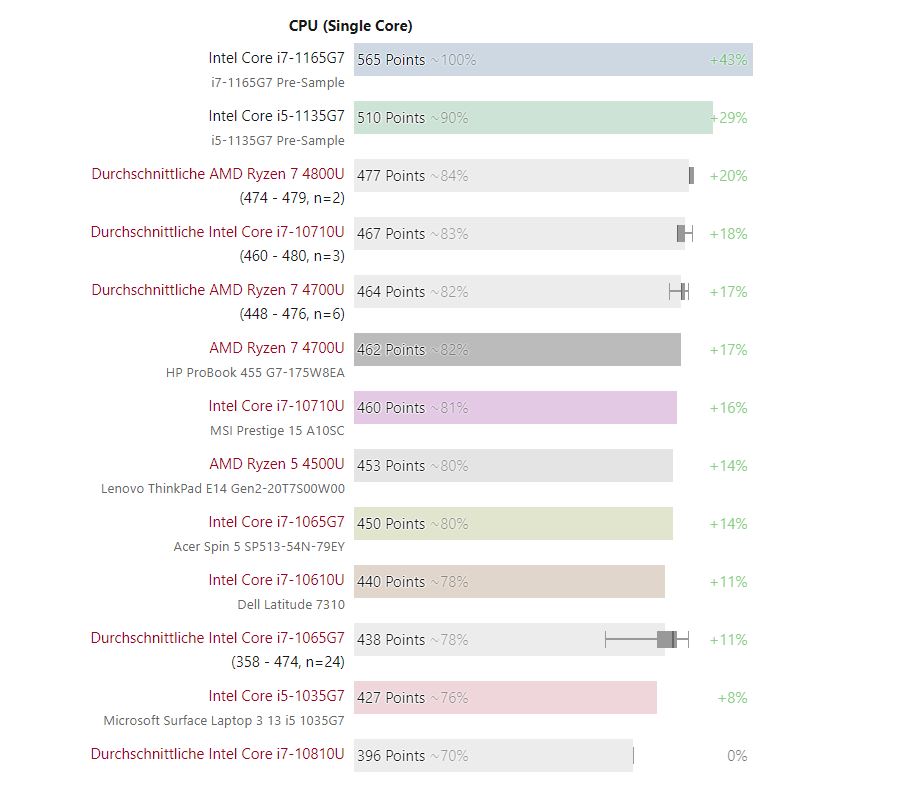 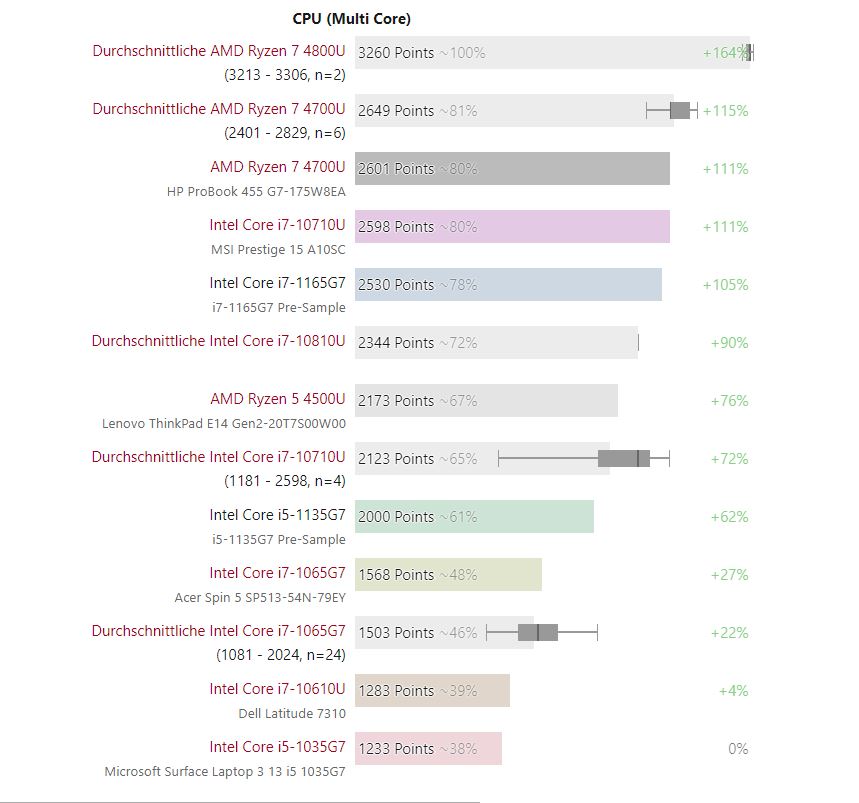 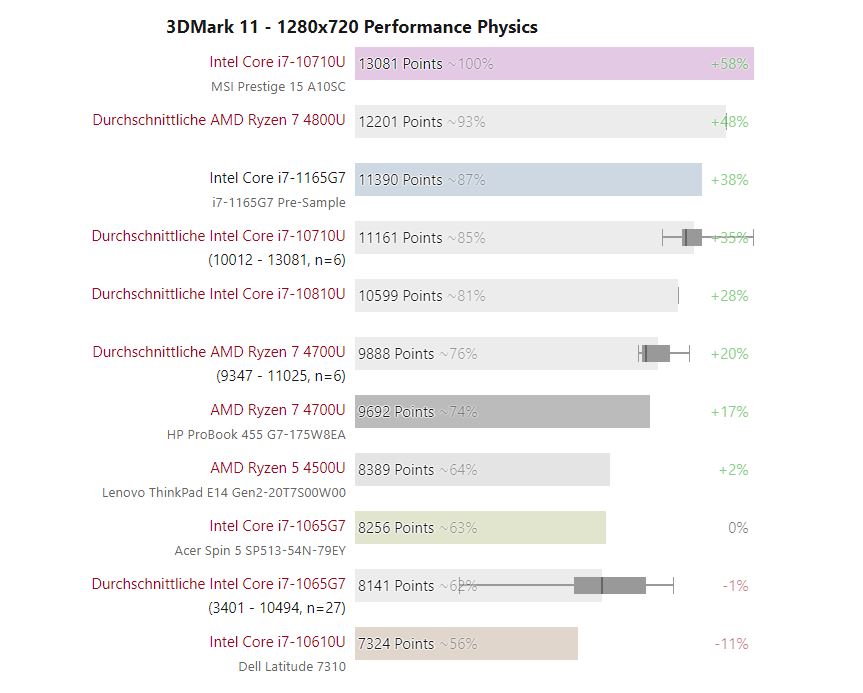 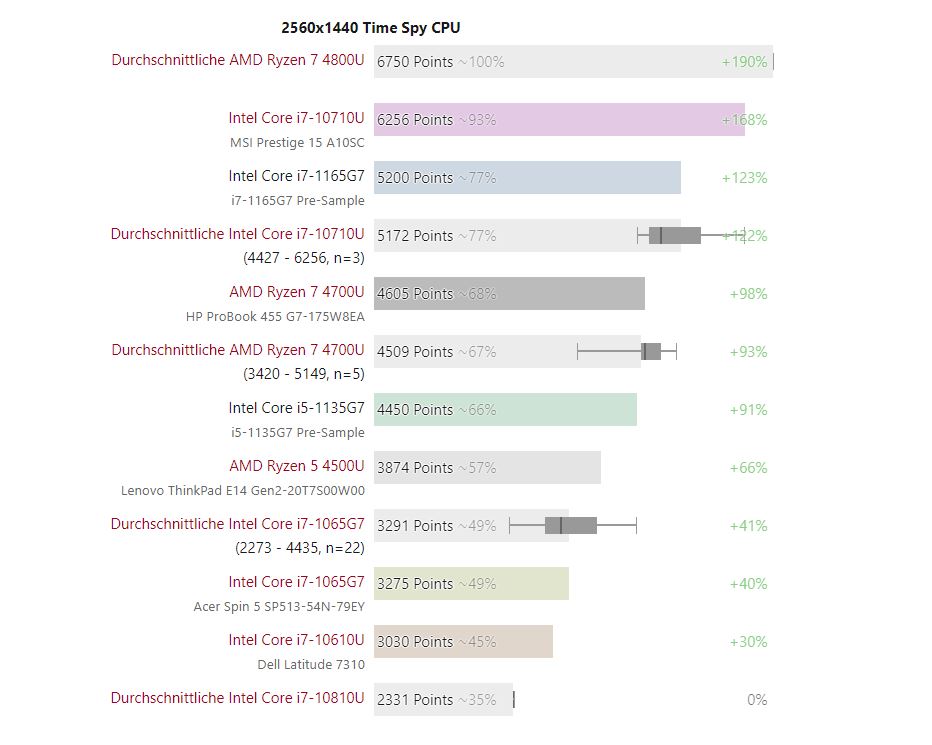 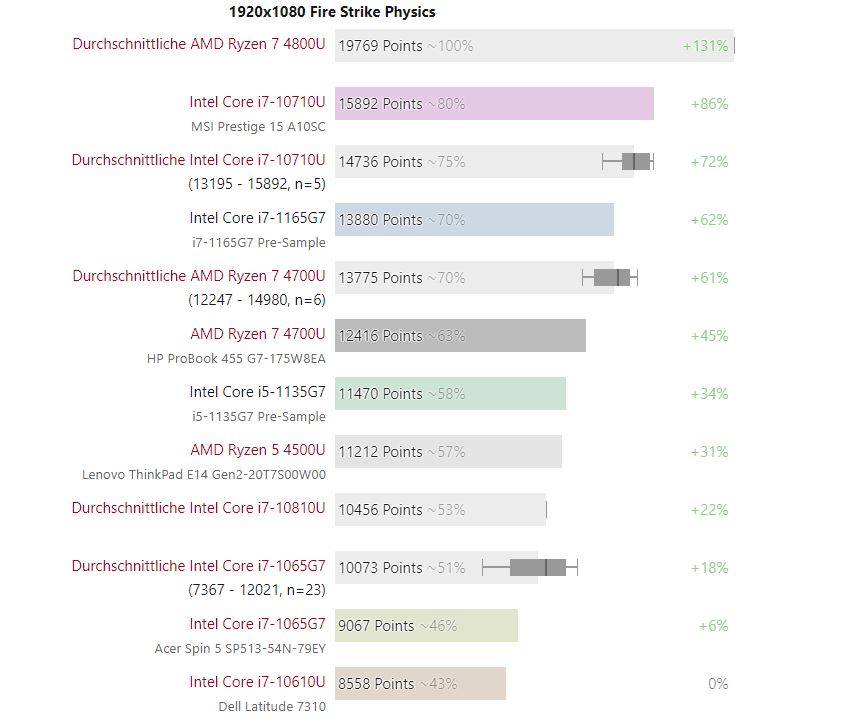 In addition to the increase in processor performance, Tiger Lake is particularly exciting with the new Gen 12 Xe LP iGPU. On Architecture Day, Intel has provided a lot of information about the technology behind Xe. In addition to iGPU, the company will also provide DG1 graphics cards and Xe Ponte Vecchio suitable for HPC applications in the future.

The Xe graphics chip used by Tiger Lake has a maximum of 96 EUs. Compared with the Iris Plus of Ice Lake, the performance is said to have doubled. Regarding API support, Xe iGPU supports DirectX (DX) 12_1 like its predecessors. The lack of support for DirectX 12_2 or DirectX 12 Ultimate may not be a problem, even for the new iGPU, the requirements for new features may be high.

There are some differences between Tiger Lake UP3 and UP4’s Xe iGPU, which we have classified in the table below:

In terms of display support, compared with Ice Lake’s Gen 11 iGPU, there is little change, but there are some upgrades. A total of four monitors can be controlled, but not three. You can operate a 4K monitor at 120 frames per second or an 8K screen at 60 Hz at most. Xe iGPU can run four 4K HDR monitors simultaneously at 60 Hz. Since it supports dual eDP 1.4, a laptop with two screens should be easy to implement. By default, only HDMI 2.0b is supported, but HDMI 2.1 of an 8K display can be used via DisplayPort 1.4.

In terms of integrated graphics performance, AMD has been ahead of games for many years. But this may change now. A few months ago, we specifically reported the performance of Xe iGPU, and now we have new data to make more detailed comparisons.

Intel Iris Xe Graphics G7 achieved at least 10% higher results in 3DMark 11 than AMD Radeon RX Vega 8. Compared to the Ice Lake iGPU, the performance has improved by an impressive 50%, which may first be attributed to the extra EU and higher clock frequency. 3DMark Time Spy, Fire Strike and Cloud Gate can also see a lead over AMD Vega 8, and in some cases, it can reach twice the high score of the older Iris Plus Graphics G7. 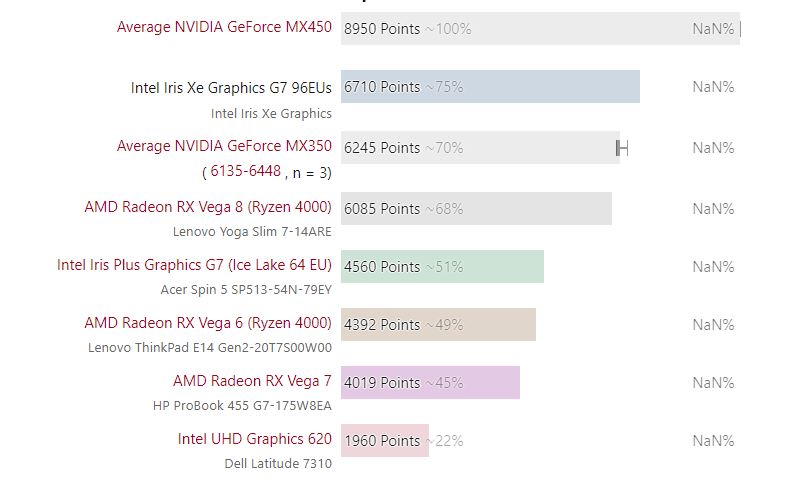 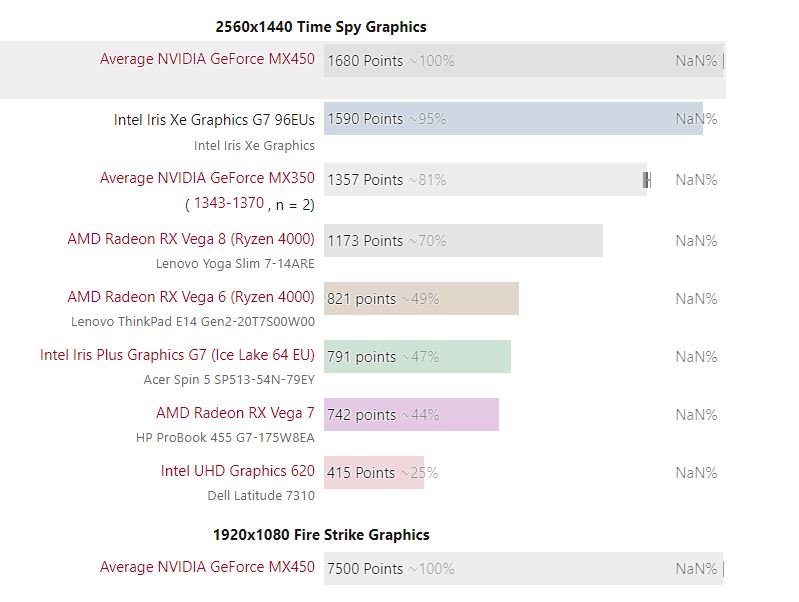 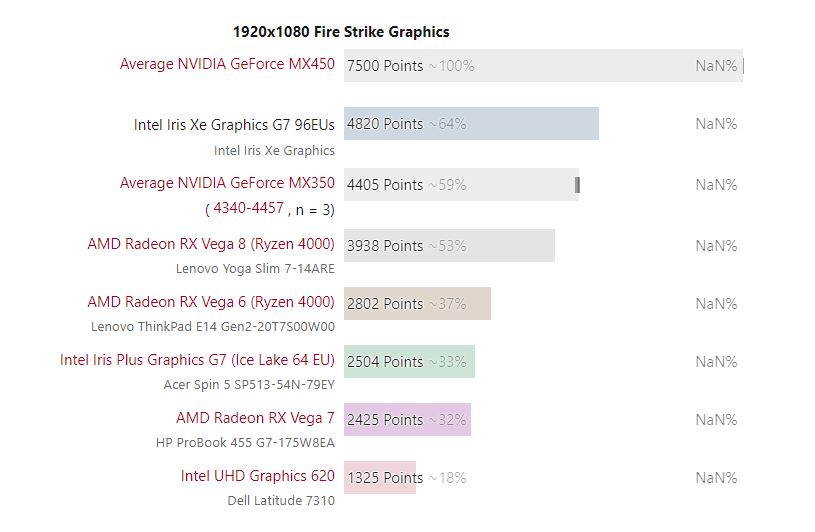 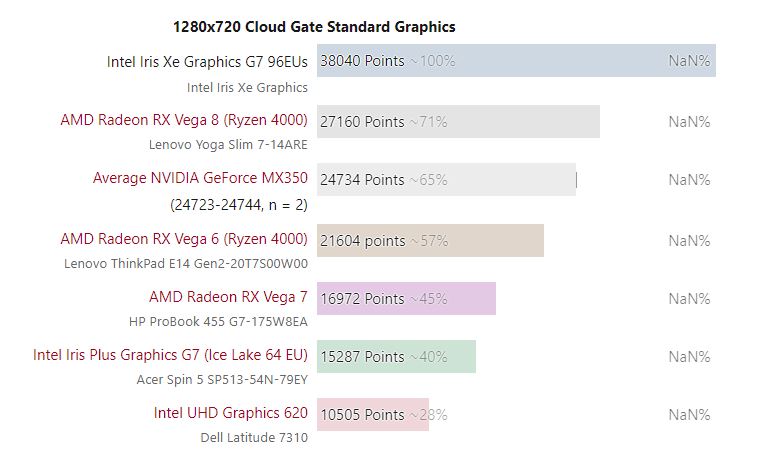 All in all, the specifications and preliminary benchmark results look promising. Intel has apparently been working hard to optimize Tiger Lake’s performance, so the tide could turn in Intel’s favor in the short term. It is very possible that a future H series with a higher TDP can snatch the performance crown in the notebook market, depending on how well AMD’s Zen 3 architecture can do with the new Cezanne APUs.

Intel has indicated that more than 150 different notebooks based on Tiger Lake will be available, from manufacturers including Acer, Asus, Dell, Dynabook, HP, Lenovo, LG, MSI, Razer, and Samsung. Project Athena has been further developed to Intel Evo, this time also factors such as a constant battery life of more than nine hours for laptops with an FHD display, a quick wake-up from standby mode, and fast charging are required.