After a long wait, Google is finally launching its new Google Pixel 5 t the end of the mont. The official technical data now available to us make it clear that, as expected. it will be an attractive premium mid-range smartphone.

Google Pixel 5 will always have 5G support ex-works and has a 6.0-inch. It receives a flexible OLED display with 2340×1080 pixels. The pixel density is given as 432 PPI and the panel is in 19.5: 9 format. As before, a maximum refresh rate of 90 Hertz is also supported here. The display cover is made of largely scratch-resistant Gorilla Glass 6.

6-inch display with a camera hole and FHD +

As mentioned earlier, the front camera is again behind a simple hole in the upper left of the panel. The screen of Pixel 5 supports 24-bit color depth and supports HDR. The panel does not have a fingerprint reader directly below the surface, because Google has placed this so-called pixel imprint sensor on the back. It is worth noting that the manufacturer successfully implemented a very narrow “chin” at the bottom of the screen. 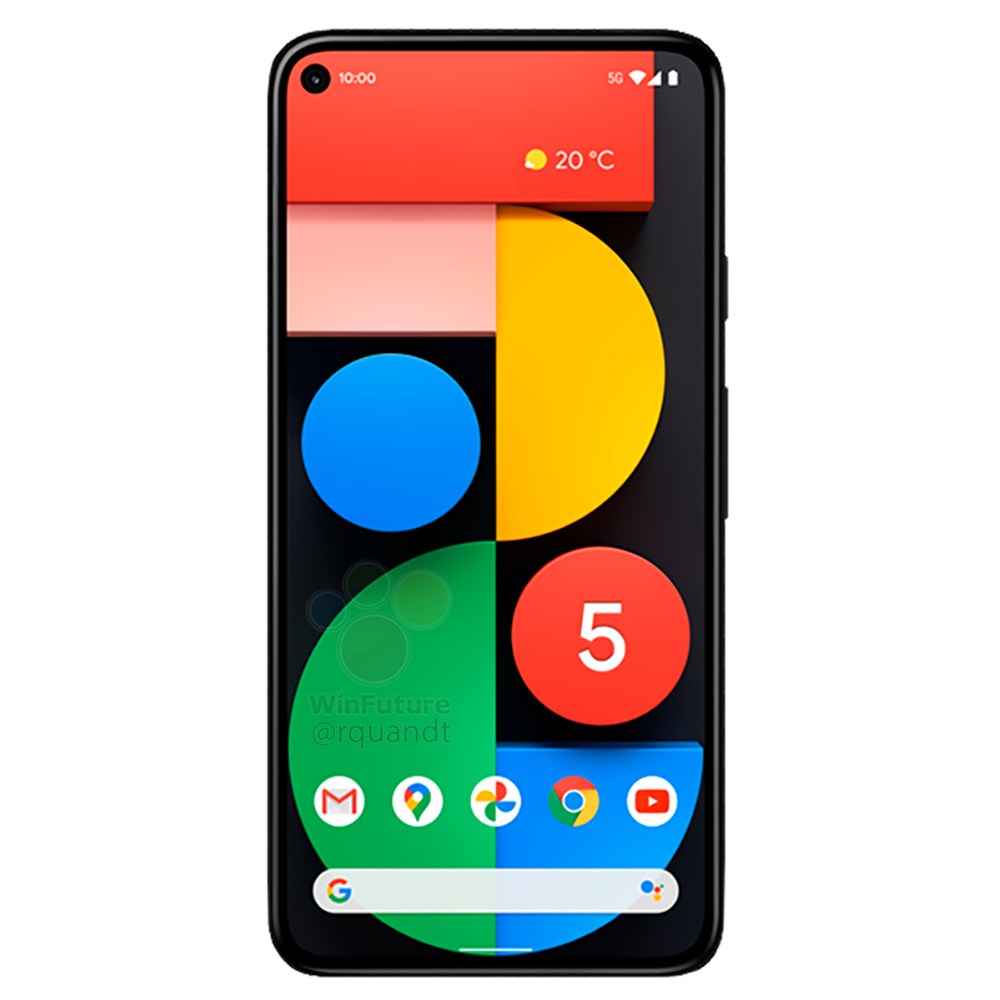 Under the hood is the Qualcomm Snapdragon 765G Octacore SoC, which with clock rates of up to 2.4 gigahertz offers completely sufficient performance for most users and comes with a directly integrated 5G modem for sub 6 GHz networks. The SoC is combined with eight gigabytes of RAM and 128 GB of internal flash memory. Google also integrates its in-house security module Titan M.

The camera is undoubtedly one of the most important points on Google smartphones. The main camera again has a Sony sensor with a resolution of 12.2 megapixels and dual-pixel phase detection autofocus. The pixel size is specified as an edge length of 1.4 microns and an F/1.7 aperture. Image stabilization here can be achieved either through hardware through optical means, or through electronic means. The field of view of the main sensor is 77 degrees wide.

Google also added a wide-angle camera with a 107-degree field of view to the Pixel 5. The resolution of the sensor is 16 megapixels, the aperture of F/2.2, and the edge length of the sensor pixels is 1.0 micron. Combined with Google’s powerful software, Pixel 5 should once again provide excellent images and ensure a unique selling point within its price range.

The front camera of Google Pixel 5 is equipped with a simpler 8-megapixel sensor and should provide an aperture size of F/2.0. It has a fixed focus, a pixel edge length of 1.12 microns, and a wide field of view of 83 degrees. The main camera can record 1080p video up to 240 FPS or 4K video up to 60 FPS. The front end provides a 1080p resolution with a maximum of 30 frames per second.

As before, Google has installed some other sensors in Pixel 5. It is including spectral and flicker sensors. There are also two stereo speakers, three microphones and radios, via dual-band Gigabit WLAN, NFC, Bluetooth 5.0, and of course LTE and 5G. The new Google smartphone has only one nanoSIM card slot, but it also supports dual-SIM operation via eSIM.

In terms of battery, Google is more generous to Pixel 5 and installed a 4080mAh power storage device, which can be charged relatively quickly through a USB Type-C connection, with a maximum power supply of 18 watts. Wireless charging is also available, including the option of reverse charging headphones and other devices. In addition to glass, the case of Pixel 5 is made of 100% recycled aluminum and is IP68 certified, making it waterproof and dustproof.

READ ALSO:   The whole truth about the Xiaomi Mi 10 and Mi 10 Pro screens

In most countries, the scope of supply also includes wired Google Pixel headsets for USB-C ports. The operating system is of course the purest new Google Android11.0, including various related services. The colors of Pixel 5 are green and black, but unfortunately, so far, we only have a frontal picture of the black model. The new Google phone is 8.0 mm high and weighs 151 grams

RTX 3080 only uses 19Gbps ​​GDDR6X video memory, NVIDIA is really not stingy: too much heat