As with the canceled Google Pixel 4a XL, there will probably also be no Pixel 5 XL

Various pixel smartphones from Google have long been rumored. Like Google Pixel 4a, Pixel 4a XL, Pixel 5, and Pixel 5 XL. The discovery in the source code of the Google application now sheds light on the thickets of the Google smartphone.

Google Pixel 4a, Pixel 4a XL, Pixel 5, and Pixel 5 XL were originally expected this year. As you know, Google has now overthrown the Pixel 4a XL. And another XL model, the Pixel5 XL, seems to have suffered the same fate. This is confirmed by discoveries in the source code of the beta version of the Google Search application.

There, colleagues from 9To5Google made exciting discoveries and probably discovered a complete portfolio of smartphones by 2020. On the one hand, Google Pixel 4a should also be launched as a 5G version called Pixel 4a 5G. This will mean that Google will also offer a 5G device for the lower middle class. However, this device cannot have a Snapdragon 730 on board, which is expected for Pixel 4. Because it is known that it does not support the new standard for mobile radio communications. Instead, use the newer Snapdragon 765G. 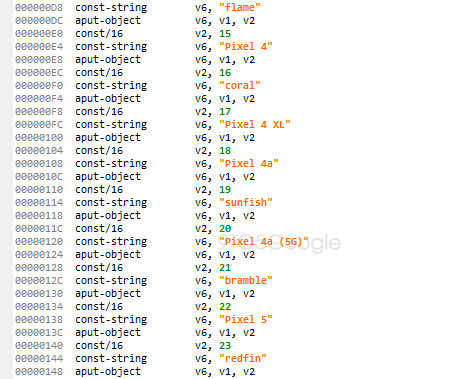 |Google Pixel 5 and 5XL may come to this year

Another surprise is that there is only one Pixel 5 model on the list. This suggests that the Google Pixel 5 XL, which supposedly leaked a few days ago, will not be released. This would also heighten doubts about the leak in the device shown. Here, too, the Snapdragon 765G should work inside. This will mean that for pixel 5, which should be classified above, and for pixel 4a 5G, located below, the same SoC is set. To distinguish two models from each other, Google may use differences in material or camera. However, such a new flagship should probably disappoint some Google fans.

READ ALSO:   Google Pixel 4a appeared in FCC: or released in July

In any case, the alleged exclusion of the XL model from Pixel 5 is a big surprise, as the device was really expected. The presentation of the remaining Pixel 5 and Pixel 4a models and the recently discovered Pixel 4a 5G is likely to take place in the coming months, possibly in the fall. The exact date has not yet been set.

Sources report that the Google Pixel 5 has dimensions of 144.6 x 70.4 x 8 mm. In the place where the main camera is located, the thickness increases to 9.5 mm. The appearance of the Pixel 5 is not too different from the Google Pixel 4. The current leak shows the first images that the new Google Pixel 5 should show. The upcoming “flagship” of the manufacturer may turn out to be a middle-class smartphone this year with the goal of significantly improving the price-quality ratio.

Based on CAD drawings, Leaker David Kowalski (xleaks7) shows the first shots of a possible Google Pixel 5, which is expected to be released in October 2020. The visualizations are very reminiscent of those that Kowalski could already create for the Pixel 4a. The front of the device stands out against the backdrop of modern pixel smartphones, with uniform screen frames and a camera hole (hole punch) placed on the display. The back, on the other hand, has a square system with two cameras and a fingerprint scanner.