He came from Lenovo

Xiaomi, it can be said, has a tradition of replenishing its management team at the turn of the year. So, at the end of 2018, the current head of the Redmi brand, Lu Weibing, who previously worked as president of Gionee, joined the company, but this year it was the turn to switch to Xiaomi for the recent vice president of Lenovo Group, Chang Cheng.

The head of Xiaomi, Lei Jun, posted a photo on the Web in which the president of the company, Lin Bin, is sitting on his left, and just Chang Cheng on his right. He begins to work as vice president of the Xiaomi Group, responsible for planning new smartphones. Thus, over two years, Xiaomi’s staff has been strengthened by two strong managers.

Chang Cheng began working at Lenovo in 2000 as director of the R&D department for laptops, but already in 2011, he was promoted to vice president of Lenovo Group. In 2015, he also became the CEO of the Zuk brand.

According to Chinese sources, at Lenovo, the top manager experienced a lot of pressure “from the side of the business” (in fact, Lenovo’s management), as a result of which he did not have time for his family. Therefore, Chang Cheng on December 31 announced his departure from Lenovo. And on January 1, he became a full-time employee of Xiaomi. Probably in the latter he was offered a freer schedule. But it is interesting that relations with Lenovo are not completely broken: Chang Cheng will continue to work as a consultant to Lenovo Mobile. 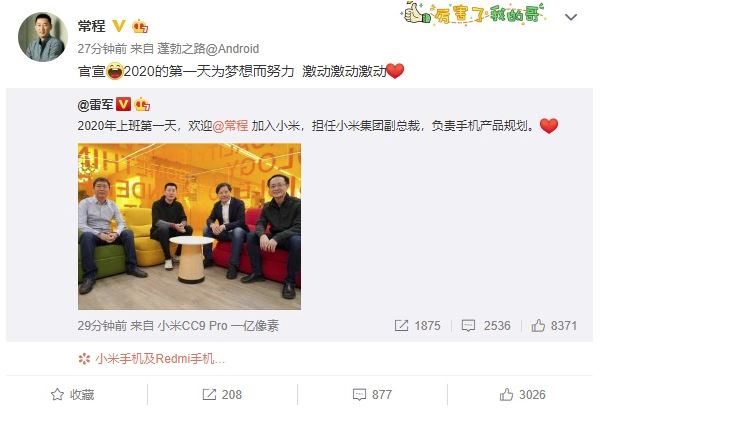 According to public information, Chang Cheng joined Lenovo in 2000 as the director of research and development of the notebook business unit. In 2011, he was the vice president of Lenovo Group and the general manager of the mobile end-to-end software platform. Tablet PC and Lenovo K900 smartphone; In June 2015, he became CEO of ZUK mobile phone brand.