Intel has just announced at CES 2020 that it will be releasing its latest 10th-generation Core processor as part of the Comet Lake family. The new processors will target high-performance NUCs and gaming laptops that will be rolling out in the coming months.

Intel on the eve of CES 2020 announced the Comet Lake-H processors, which are part of the 10th generation Intel Core CPU line. These are Intel’s top-end laptop CPUs that replace the 9th generation Coffee Lake Refresh-H line. 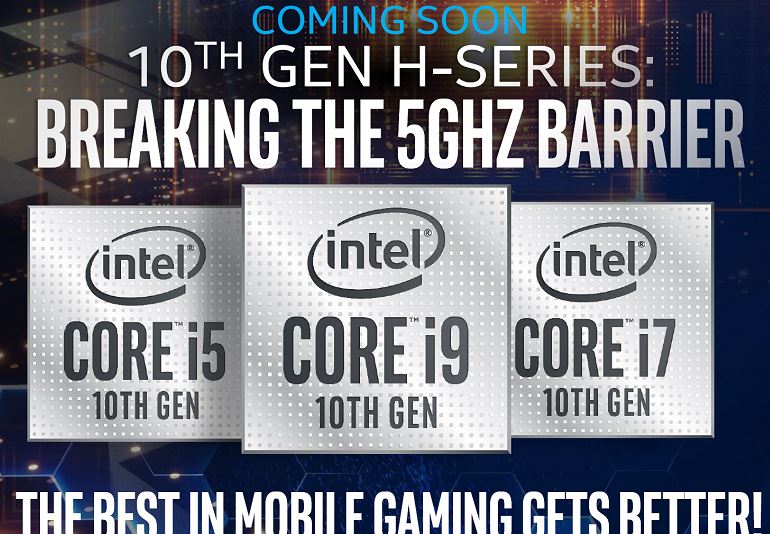 Intel has not yet declassified the Comet Lake-H line fully, but this is most likely reserved for an official event that will be held this night. Nevertheless, it is reported that in the Comet Lake-H family there will be models of the Core i5, i7 and i9 series.

The first get four cores and 8 threads, the second get 6 cores and 12 threads, and the top Core i9 get 8 cores and 16 threads. That is, in fact, there will be no strong differences from the current line. Which is understandable – with the preservation of the 14-nanometer process technology. It is difficult to offer something better.

However, the frequencies will still increase. Intel indicates a value of 5.0+ GHz for the Core i7 model, which means the Core i9 will have an even higher frequency. True, the increase relative to the models of the current line is unlikely to exceed 200 MHz – after all. We are talking about mobile CPUs with a rather strict TDP limit.

Once again, we note that more details about these and other Intel processors should appear during the official event which will take place at night.

In the near future, AMD will announce its new Zen 4000 series mobile chips with 8 core. And 16 threads based on Zen2 architecture in 2020, so it should be kept in mind when comparing. Finally, Intel refers to a 10th generation processor that offers longer battery life than the AMD Ryzen-based laptop.

It was also nice to see that Intel is more transparent in its tests. Demonstrating the exact system settings used and the parameters. In which each performance metric was measured.