The Insider with the @NextGenPlayer nickname posted a list of game projects on Twitter that will be displayed with a full announcement of the PlayStation 5 game console.

It is worth knowing that if this list is truly confirmed. Then there will be an incredibly welcome acquisition for millions of fans of the PlayStation 5 brand from day one.

READ ALSO:   PlayStation 5 Developers are about to make a huge mistake

So, in addition to continuing Kratos adventures in God of War 2, which has already been reported. We look forward to a new episode of Spider-Man (Spider-Man 2). A colourful project about the dragon Spyro, an updated version of the hardcore role-playing game Demon’s Souls with the prefix Remastered. A continuation of the exclusive for PS4 projects Horizon Zero Dawn and The Order 1886. 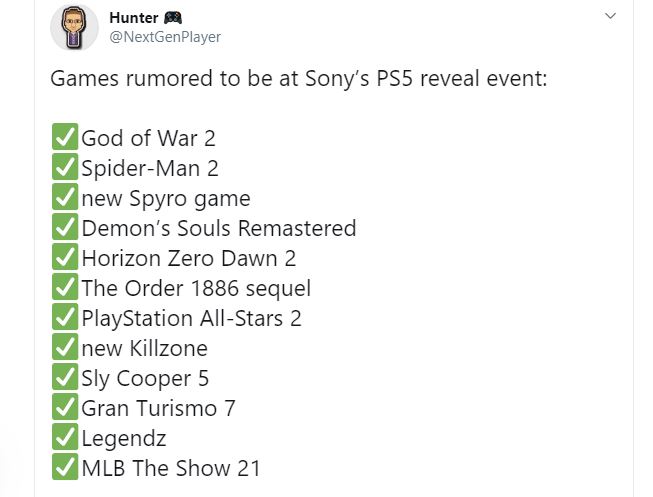 Shooters fans will be delighted to receive a long-awaited sequel to Killzone, for team sports fans preparing for PlayStation All-Stars 2. A new episode of the Gran Turismo and Baseball Simulator MLB show 21. Finally, Legends is expected to announce a new intellectual property.

The only question is which of these games will be released at the console release this fall.