So far, few have known about the Slovak startup Tachyum, but after announcing the 128-core Prodigy T16128 processor they designed, they will talk about the company. After the new product put into production, you will hear news from the company. But it is still too early to talk about it: this year it will only produce the younger brother T16128 (64-core T864). 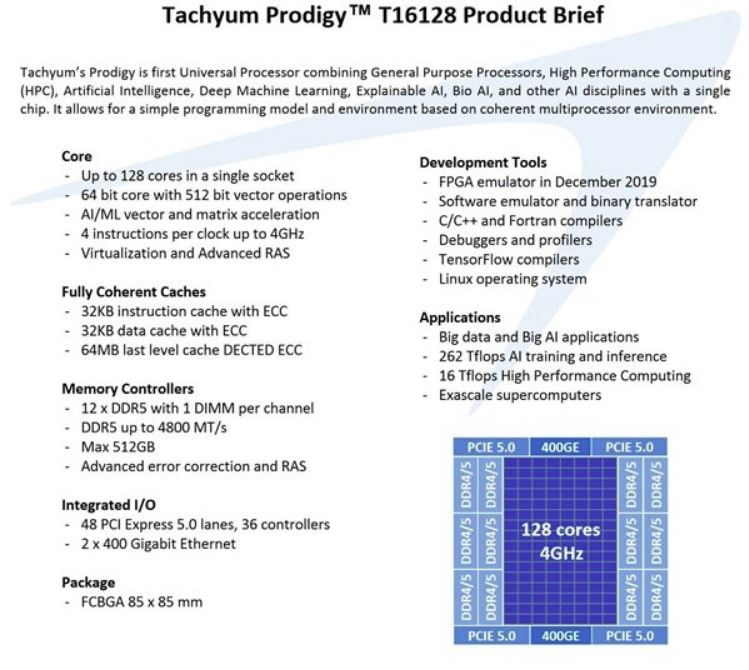 At the same time, Prodigy T16128 looks very modern: 128 cores, 64-bit addressing, four instructions per clock, virtualization support, frequency up to 4.0 GHz. The integrated 12-channel DDR5 memory controller supports one module with a maximum frequency of 4800 MHz per channel, but due to the large size of the module (maximum 512 GB), the total supported RAM reaches 6 TB. The peripheral function list includes a PCIe 5.0 controller (up to 48 interface lines) and two 400 Gigabit Ethernet controllers.

According to reports, the processor will be produced by TSMC using a 7-nanometer process technology with a package size of 85 x 85 mm2. In other words, the CPU is only slightly larger than the Intel LGA2066 socket size.

Interestingly, Tachyum did not mention the processor architecture, and here may be the most common choices such as RISC, MIPS and ARM before appearing in the form of “own development”. At the same time, the company said that the Prodigy T16128 bypassed the Intel Xeon processor in both single-core and multi-core performance, making it more compact than similar CPUs in the ARM architecture. Usually, not a processor, but a miracle. On paper, of course.

The first in the series will use a simpler model. For example, 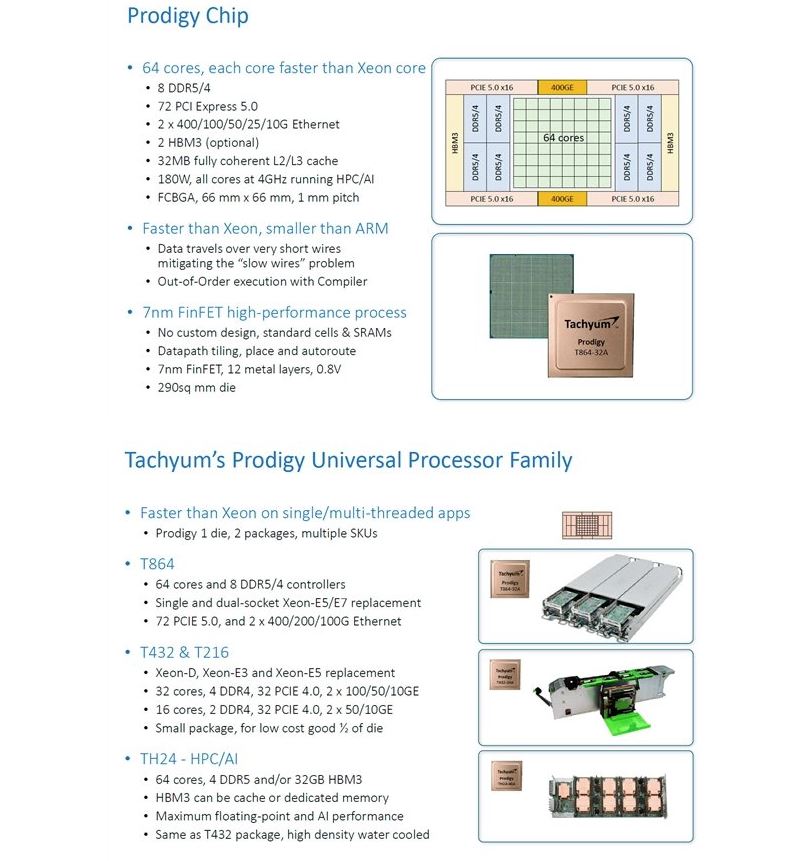 A few words about Tachyum itself. The company was founded in 2016 in Slovakia by Americans. The startup has already attracted $ 17 million in investment from the Slovak government. But this is not the only cash injection. The company’s head, Radoslav Danilak, has worked in the semiconductor industry for 25 years, including SandForce, known for SSD controllers.

But in general, from its ideological point of view, this processor is close to the single-chip system of modern smartphones. In which there are also units responsible for conventional (small core) and high-performance (large core) computing, Neural processor (NPU), etc. Therefore, there is no new concept in the structure of Tachyum Prodigy. Another thing is that such a processor can indeed be very powerful. And that may not be the case it can only be judged when the paper solution becomes an actual product.