Less time remains before the release of the budget Honor X10 camera phone, and more and more details about it appear on the Web. This time, the characteristics of the model were confirmed by the well-known insider Ishan Agarwal, he also published an image that shows all the colors of the smartphone.

The device has reportedly received a display with a frame frequency of 90 Hz with a diagonal of 6.63 inches with a resolution of Full HD +. An important feature – the screen dispensed with cutouts, since the front camera is retractable. The main camera with its design resembles the camera of the flagship Honor View 30 Pro.

The main sensor with a resolution of 40 megapixels is borrowed from the Huawei P30. It is connected to a fast aperture lens with an f / 1.8 aperture. An 8-megapixel sensor is connected to an ultra-wide-angle lens with an aperture of F / 2.4; the third module with a 2-megapixel sensor is used for macro photography. In detail, we already told the Honor X10 and Honor X10 Pro cameras (the top model has optical zoom). 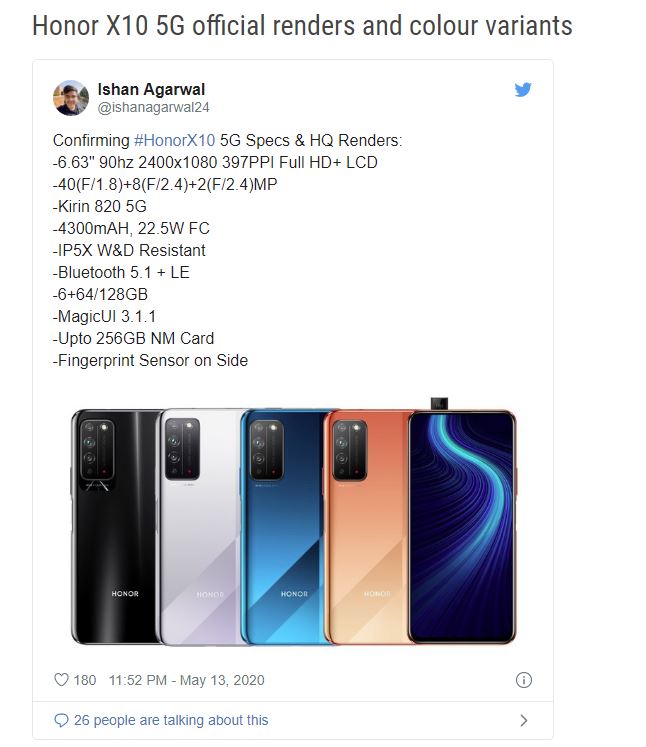 Honor X10 is built on a single-chip platform Kirin 820 5G and endowed with a battery capacity of 4300 mAh with support for fast charging with a capacity of 22.5 Wh. According to an insider, the smartphone even implements protection against dust and water in accordance with the degree of IP5X. There is also a Bluetooth 5.1 + LE adapter, support for proprietary NM memory cards up to 256 GB in size, and a fingerprint scanner on the rear panel. Two memory options are promised: 6/64 and 6/128 GB. We already wrote about the cost of the Honor X10.

As you can see in the image above, the Honor X10 5G will be offered in a gradient finish with four color options. These include silver, blue, orange, and black. The phone will be equipped with a display from edge to edge thanks to a rising selfie camera at the top.

According to the specifications, Agarwal confirms that the phone will have a 6.63-inch IPS LCD display with Full HD + screen resolution. Phone performance will depend on the HiSilicon Kirin 820 5G chipset. The processor will be accompanied by 6 GB of RAM and 64 GB or 128 GB of memory, depending on the version. Built-in storage can be further expanded up to 256 GB with a microSD card. The phone will boot up Magic UI 3.1.1 based on Android 10 and runs on a 4.300 mAh battery. The battery comes with support for 22.5W fast charging.

As for optics, the triple camera on the rear panel will consist of a 40-megapixel (f / 1.8) main camera, followed by 8-megapixel and 2-megapixel cameras. Previous rumors have shown that a 16-megapixel sensor will be installed in the lifting chamber module. Agarwal also confirms that the phone will support Bluetooth 5.1 and Bluetooth LE (low power consumption). The phone will also have IP5X dust and water protection.