The signs of the imminent launch of the Windows update on May 10, 2020 have already increased over the past few days. And now Microsoft has almost confirmed itself: the release information is online.

The corresponding site usually goes online just before publication. According to colleagues from WinCentral, in 2004 it was released for Windows 10 and Windows Server in versions of 2004. In fact, this can be seen as the final confirmation of the assumption that the release was released on May 28.

The information provided shows that there are currently no known and still open problems. This is definitely a good sign for the upcoming release. In addition, there is also an additional page for fixing bugs that became known after the release.  Now, of course, it is initially empty and will fill up somewhat in the coming weeks. 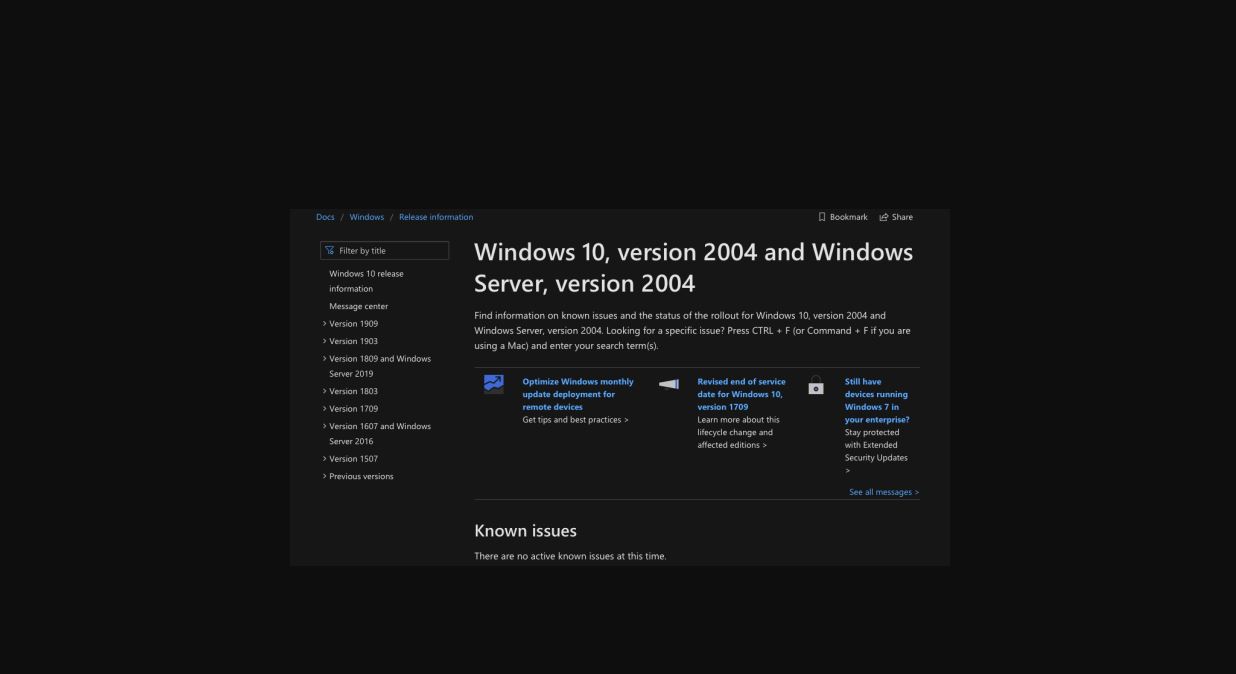 Still in the name plan

Tomorrow’s situation will still be enough to justify the appointment as a May update. However, Microsoft, despite this name, will not be ashamed to start in June. Only if the situation makes it necessary. This is the lesson of the autumn update in October 2018. When you absolutely wanted to use the month for the release and you had to revoke the entire update again due to various serious errors.

The fact that the May 2020 update appeared at the last moment is somewhat surprising. In the end, Microsoft made the last notable changes to the version before Christmas. Since then, only intensive testing has been carried out. So that errors that still exist can be fixed. Sometimes this even led to speculation that the update might be released before spring.

Now, official pages with information about the release of Windows 10 version 2004 and pages about resolved problems have opened before Microsoft released the update publicly. Pages have not been published yet, but we were able to find them and take screenshots.

Check out the screenshots on the page above and below. Microsoft’s preparations for a Windows update on May 10, 2020 seem to be well underway.

Windows on ARM systems: support for x64 software is coming

Redmond developers have made great strides in developing emulator technology. It took a little while before you can run the current 64-bit software on ARM systems.

Microsoft has been working for some time to be able to manage laptops and other mobile systems based on ARM chips with its own software platform. Appropriate devices promise a significantly longer battery life – but software support has so far been pretty weak. Of course, the success of sales is so modest, because it is unlikely that any of the users will want to intervene in the inability to use certain applications in case of doubt.

The ARM version of the Windows platform for Microsoft currently has the ability to run x86 software on the emulator for 32-bit systems. Currently, this means that most modern commercial applications are not taken into account. At least that will change soon, according to a report by MSPowerUser.

READ ALSO:   Microsoft will release this version of Windows only at the end of the year