The picture also shows all the color choices of the Mi Band 5 strap: black, yellow, red, and blue-gray. Regarding these features, the official has not said anything. But in the near future, Xiaomi will begin to “fool” about this. According to preliminary data, the device will be equipped with a 1.2-inch screen, an NFC adapter that can be used outside of China, 11 training modes, a pulse oximeter, and functions for controlling smartphone cameras. The trailer also confirmed the official premiere date of Mi Band 5-to is held on Thursday, June 11th. 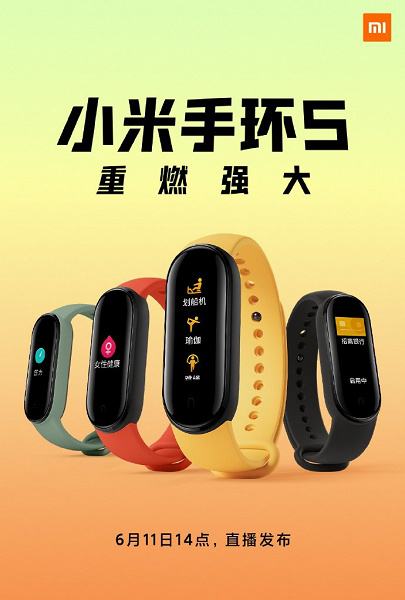 In a few days, the next generation of cheap fitness tracker Xiaomi Mi Band 5 will be launched. In the early stage of the demonstration. The first official picture has now been released. Which shows the smart bracelet of the Chinese manufacturer in multiple colors.

On the morning of June 11 (Thursday), Xiaomi will launch its new Mi Band 5 fitness bracelet. The successor to the popular Mi Band 4 has caused fierce debate. Mainly due to the new target price range of fewer than 30 euros and the resulting good price-performance ratio. However, Lei Jun, the founder, and CEO of Xiaomi, now ease his tension by releasing the official trailer of Mi Band 5 on the Chinese Weibo platform Weibo before the online keynote. This not only confirmed the leaked design of the fitness tracker but also confirmed the first features of the new generation of products.

Design, features, and technology of the Xiaomi Mi Band 5

You can see Xiaomi Mi Band 5 in four colors of black, yellow, red, and green. Although the appearance of the bracelet and bezel has been minimally modified. The appearance of the fitness tracker is based on the appearance of the previous generation. The picture also shows the NFC version used for contactless payment. The picture also shows various exercise functions and the possibility of women monitoring the menstrual cycle. In addition to the classic heart rate monitor to monitor blood oxygen levels. You can also expect Mi Band 5 to be equipped with a suitable SpO2 sensor. Amazon Alexa is also promised as a voice assistant.

Technically speaking, Xiaomi Mi Band 5 and its slightly larger OLED display should be mainly distinguished from the current Mi Band 4. This should grow to 1.2 inches and have a significantly higher brightness and improved contrast. Among other things, this will improve the readability of the screen in direct sunlight. It will also be interesting to see how Xiaomi will introduce the latest “Personal Activity Intelligence” (PAI). The aim is to convert all determined health data into a point system. So that users can improve their health in the long term.