OnePlus’s new machine OnePlus Nord has been warming up for some time, but the release date has been undecided.

Today, according to a tweet that Ishan Agarwal has already deleted, OnePlus Nord will be released on July 21. The release of OnePlus will also be different from anyone we have seen before.

Since the start of the new crown, online product release has become the norm, and OnePlus will release new products through AR release, which is the first time in the world. AR is the abbreviation of augmented reality. In the simplest sense, it means bringing the digital world into the real world. This means that you will most likely see the launch in your living room or anywhere. 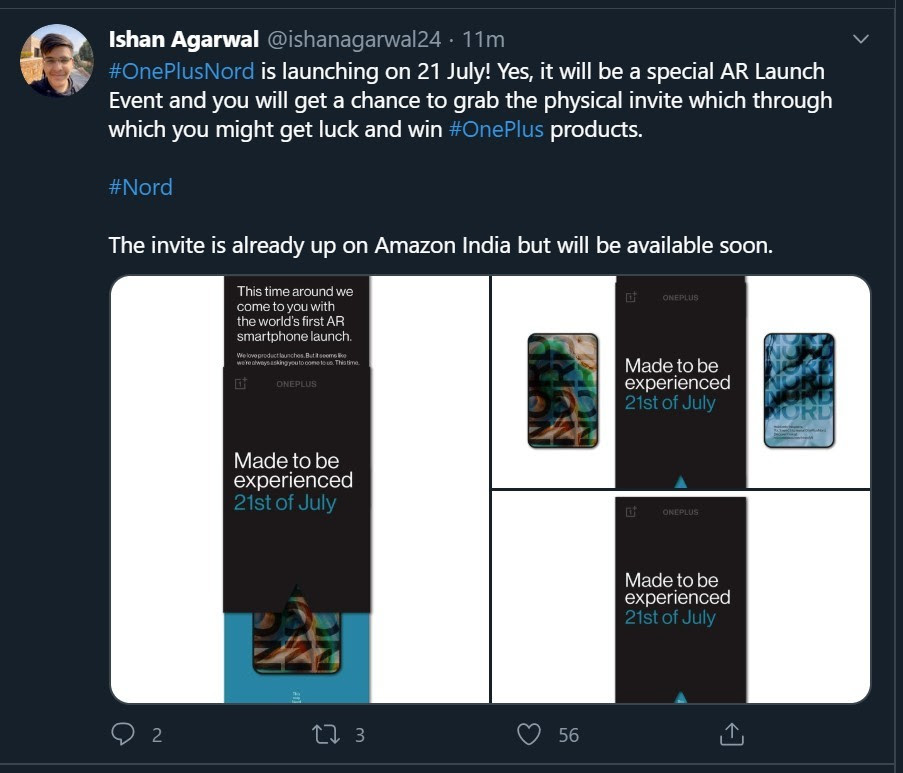 According to previous reports, OnePlus Nord will be equipped with an AMOLED screen with a 90Hz refresh rate. It has been confirmed that the Snapdragon 765G processor built into OnePlus Nord will support 5G networks. Other features include rear four cameras, 30W charging, and a more affordable price.\

We felt that there was no technology on the market that would allow us to create a mid-range product that meets our philosophy. But we were absolutely sure that this time we will cope with the task. Carl Pei

Early leaks indicate that the smartphone received a quad-camera with a 64-megapixel image sensor. As well as a single-chip system Snapdragon 765G. A screen with an image refresh rate of 90 Hz is also expected.

|Why OnePlus Nord comes out in Europe, but not in the USA

Over the past few days, OnePlus executives have given exclusive interviews to well-known technical publications about the upcoming OnePlus Nord smartphone. Carl Pei, co-founder of OnePlus in an interview with the Android Authority, talked about why the company does not want to release OnePlus Nord in the United States.

According to him, OnePlus is succeeding in India and growing rapidly in Europe. And therefore it makes sense for them to focus on those markets where, in their opinion, One+ Nord will be a success. In addition, premium smartphones are gaining popularity in the US market, while mid-range smartphones are losing their market share in recent quarters.

Earlier, Karl Pei confirmed that the OnePlus Nord smartphone is equipped with a very interesting camera, which will certainly please future smartphone owners.

READ ALSO:   Shipping of Surface earbuds is delayed because there is no delivery yet

Huawei Cheif Confirm: EMUI 11 will launch the third quarter of 2020