According to a well-known whistleblower @Apple Lab yesterday, all apple iPhone 12 models will be designed with pure flat glass 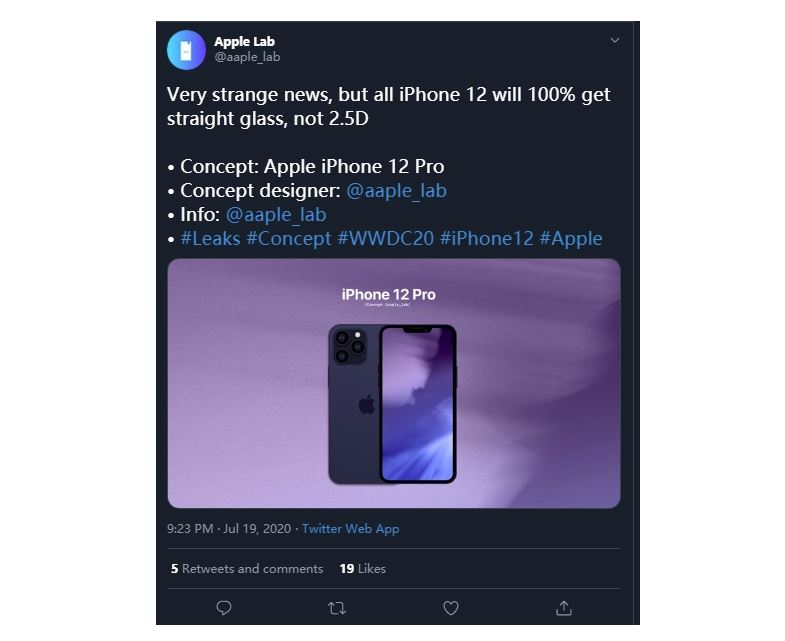 Currently, with the exception of Apple, the flagship phones of most manufacturers have one or more models with curved screens or screens with a waterfall. Apple’s previous 2020 iPad Pro used a flat front glass design. So the iPhone 12 series could have a similar design, while the flat panel design makes it easier to hold the phone and helps keep costs down.

According to a well-known analyst, Ming-Chi Guo previously believed that the iPhone 12 series will include 2D/2.5D panel designs.

|Will iPhone 12 all models cancel the 2.5D curved glass design?

This year, the new iPhone is likely to change the design. Judging by previous news, this year’s iPhone will return to a Founder design similar to the iPhone 4. Or closer to the mid-design of the current iPad Pro.

An Apple Lab informant recently tweeted that all iPhone 12 models will use a clean flat glass design, i.e. 2.5D curved glass will be canceled. With the exception of Apple, most of the manufacturers’ flagship mobile phones will present one or more models with a curved screen or “waterfall screen”.

For users, do you prefer a clean straight screen design or a radian design?

Finally, if the news is true, the iPhone12 series is canceling the 2.5D curved glass design and canceling the earbuds and charging heads. And the battery life is not very good. The capacity is only 3687 mAh). However, since the news has been published, you can only look at it. In the end, Apple officials did not respond. Even to cut costs, the editor believes that Apple is unlikely to “launch” this glass panel. Just look, still waiting for the autumn conference, let Apple personally open this veil.