Samsung is going to introduce the first 5G Tab Galaxy S6 quarter in this year. Samsung already confirmed that in the middle of the year 2020 Galaxy S6 5G Tablet will be released. In this tablet, we get mindblowing specification with 5G Technology

Remember, in October last year, there were reports that the Samsung flagship tablet will release the 5G version of the Galaxy Tab S6. Last week, the product was discovered on the Samsung website.

Now, the world’s first 5G-capable tablet specifications have been published. Which confirms that he will be an almost complete copy of his younger brother. 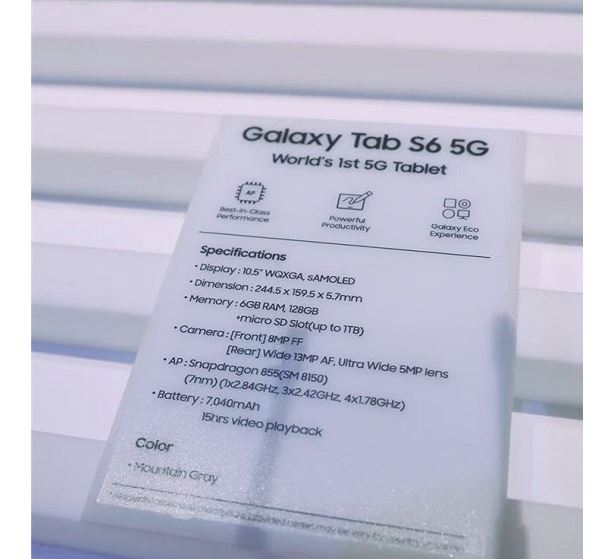 In addition, the tablet has 6GB of RAM and 128GB of flash memory, you can also install a microSD memory card which has a capacity of up to 1TB. In the main camera, image sensors with a resolution of 13 and 5 megapixels are installed. Front camera resolution is 8 megapixels.

The Samsung Galaxy Tab S6 5G is equipped with 7040 mAh battery, which can provide up to 15 hours of video playback.

The Galaxy Tab S6 5G tablet will debut in the South Korean market. This will happen in the first quarter of 2020, but there is no specific date and availability status yet. 5G is progressing fast, but we do not have many 5G tablets in the market. In fact, there aren’t many options for 5G smartphones. Most 5G phones are flagship products. This year, however, we will see an average and potentially entry-level 5G phone.