Dr Lisa Su, President and CEO of AMD (Advanced Micro Devices), said at the CES 2020 pre-launch conference on January 6, 2020, that AMD ’s PC chip market share has increased continuously. 8 Quarters and this is just the beginning.

Dr Su Zifeng said that in 2020 AMD will use its advantages-Zen 2 architecture and 7 nm manufacturing process-to catch up with Intel. At CES 2020, AMD introduced the Ryzen 4000 series APU processors and the Ryzen Threadripper 3990X 64-core processor. In terms of graphics, AMD announced a new mainstream GPU that can compete with rival Nvidia. In addition, the Zen3 CPU will also be released this year.

After the pre-show press conference, Dr Su Zifeng accepted a group interview with the media. Lei Fengwang compiled the interview without changing its original intent.

READ ALSO:   16 cores is not the limit for Ryzen. AMD sees no reason to dwell on this number of cores

Q: You did not disclose any information about the console chip today.

A: Our partners will announce the news as soon as possible, but presumably you have also heard that the new console will use AMD Zen 2 and RDNA, and we look forward to this.

Q : Do you think it’s too early to talk about desktop APUs?

Answer: Yes, it’s a little early. AMD is very focused on desktops and servers in 2019, and we introduced the first Navi-based RDNA chip. In 2020, many people have asked me about Zen 2 notebooks, and the outside world should have higher expectations for AMD. What I want to say is that we are looking forward to the third-generation Ryzen 4000 CPU series, but only in January, we have a lot to do.

Q: What challenges do you think AMD will face Intel in the field of PC chips?

A: For desktops and servers, we focus on the CPU and take advantage of “chipset” technology. For notebooks, we have an integrated CPU and GPU, and we focus on optimizing battery life. We think Ryzen 4000 will be very powerful.

Looking back at the past 8 quarters, we have a certain share in the PC market every quarter, so we are full of confidence. If you talk to some manufacturers, you will find that they are doing more designs around the AMD ecosystem. Currently, we see Lenovo Yoga Slim 7 as well as Asus and Dell equipment, and there will be more products equipped with Ryzen 4000 series in the future.

Q: With the development of chips in recent years, how do you think the notebook computer market has changed from the beginning to the present?

A: I think people’s expectations have increased and I look forward to better performance from laptops. Bringing desktop performance into laptops is one of the fastest-growing areas on the market. Currently, we don’t spend much time on commercial advertising, but we think it is also important. In addition, what we do with security and manageability can be very important in laptops. 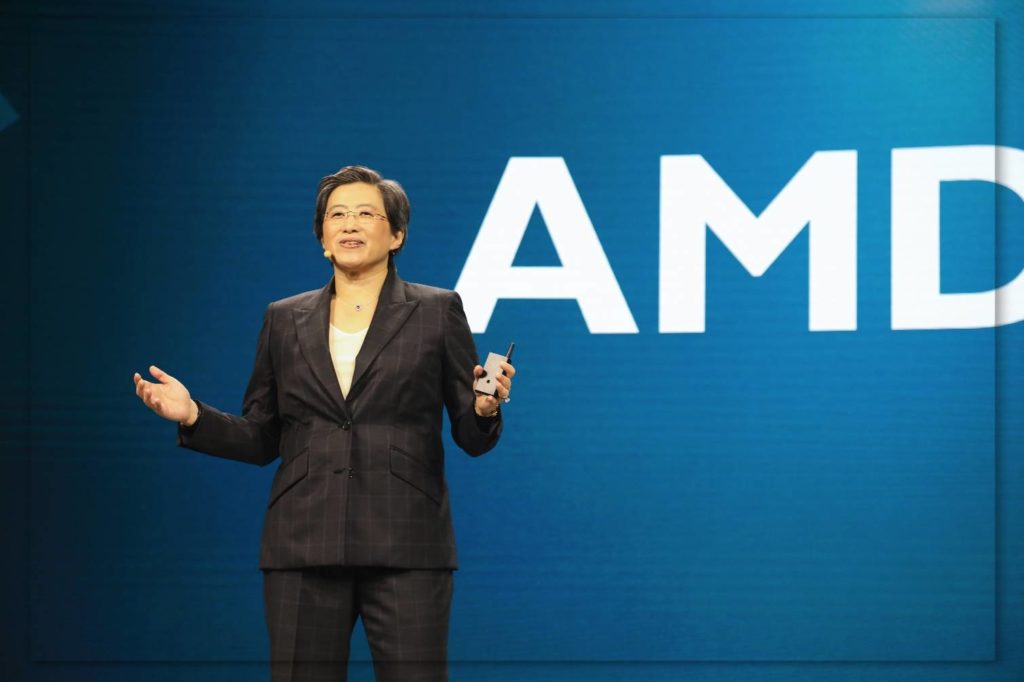 Q: These chips have entered the design stage three years ago, so why are the new parts using Vega instead of Navi?

A: This has to do with how we integrate components at the right time. Vega architecture is well known and well optimized. AMD has been planning to integrate it into Zen 2 + Vega. But you will also see Navi in ​​our APU.

Q: In the face of Intel’s rival, how should AMD compete with it in the business of commercial customers?

A: It’s like a journey. We have seen that the PC market has potential. If you look at the sales of AMD desktops and laptops, you will find that we have made great progress. Whether it’s a large retailer or a commercial manufacturer, AMD’s microprocessors are built-in, and they increasingly recognize AMD, so I’m very optimistic.

Q: Intel has launched low-power products. Do you think it should compete with Intel’s new foldable devices and other forms of devices?

A: AMD will continue to focus on PC form factors. We are working closely with Microsoft to implement some of the features required by these form factors. You can see our thoughts through Surface.

Q: Intel provides partners with market development funds to use their hardware while having a good design. AMD’s marketing is well done, but how will AMD compete with this?

A: This is actually bringing great technology to the market, and at the same time there is an ecosystem behind it. We feel that success is built on success. From the first-generation Ryzen mobile to the second-generation Ryzen mobile, there are more designs. There are more than 50 designs in 2019. The partners have a better understanding of our capabilities. In fact, we have been stepped by step as planned.

Let’s imagine that there will be more than 100 laptops to be launched in 2020, which actually involves the entire retail marketing. I think our brand is doing well, and we will continue to work to improve AMD’s brand and ecology.

Q: Have you read some reviews on how products like Threadripper change the brand image of AMD?

Answer: We have seen it. It’s not as clear as “Threadripper brings AMD X% market share”, but AMD does get more recognition for Threadripper, which again shows that success is built on success.

If you look at Amazon, you will find that 12 of the top 12 desktop processors are from AMD. This is a change and there are more on laptops. During the holiday season, we saw very good sales of AMD-built devices, and this is only the third-generation Ryzen mobile series.

Q: In the past, AMD has been a leader in the field of high-end gaming desktops, but can it be said that this will be the first time AMD has taken the lead in high-end laptops?

Answer: Yes, this is a big attempt on laptops, and we are doing a lot of work. Previously, we were leading the way in notebook form factors, but they were usually low-end laptops. This time, we will see a wider range of technologies. Frankly, we think the Ryzen 4000 series is the best notebook processor currently.

Q: Do you think real-time ray tracing will have a huge impact on graphics like Nvidia said?

A: I think ray tracing is important, and we talked about its importance long ago. We are investing heavily in ray tracing and its ecosystem. Both of our partners also say they are using ray tracing. Everyone should expect that our discrete graphics will also have ray tracing in 2020. Although it is still early, I believe the ecosystem needs to evolve. More games, software, and applications should use it.

Q: Will AMD focus on the high-end discrete graphics market?

A: In fact, the discrete graphics market, especially the high-end market, is very important to us. I know that some Reddit users want a high-end Navi, and AMD will indeed release a high-end Navi. You can look forward to it, although I usually don’t disclose products that have not been officially announced.

Q: We have noticed some reports about the extension of TSMC’s delivery time. Can you talk about how AMD will handle the cooperation relationship and orders with TSMC in 2020?

A: We currently have 20 products based on the 7nm process in production or research and development, so we have made a big bet on TSMC’s 7nm. We have a good relationship with TSMC. They have always supported us, but the wafer supply is tight. In our opinion, we need to make sure we can forecast demand ahead of time.

In the desktop product line, when we first launched the third-generation Ryzen, some high-end products were out of stock, especially the 3900X and 3950X. However, these CPUs are now readily available through retailers. So what you see is just the surface, and I think the 7nm technology does work well, and we are happy with it.

Question: AMD previously stated that Zen3 will use TSMC’s 7nm + (N7P) process. Given the changes in some products, does this help alleviate the situation?

A: To be fair, all 7nm versions of TSMC share a lot of technology, whether it is N7, N7P or N7 +. It is important to make sure that we make predictions and plans, and we do the same.

Q: Threadripper currently has 64 cores. How many cores can consumers increase?

A: 64 is currently the limit for the third generation of Threadripper. According to some data, scaling from 16 to 32 cores is actually pretty good. For multi-threaded applications, going up to 64 may have some impact, but we believe it will be better by optimizing. Many people don’t know what they can do with 64 cores, so we need to make sure that they can really take advantage of all of them through the ecosystem. We love seeing new applications, and we love working with users who can actually use it-we are really trying to optimize.

Q: AMD also had Arm-based products before, such as Seattle and K12. An arm is approaching the field of high-performance servers and is expected to achieve 25% year-on-year performance growth, which exceeds AMD’s own performance forecast. Will AMD work with Arm again?

A: We have used Arm’s microcontrollers in some products. From a server perspective, we haven’t invested in Arm at the moment. I do think Arm has a market and ability, but we think there is a huge market for x86, so we plan to continue using x86 starting with the second generation of Epyc.

Q: Looking at the entire industry, what do you think of RISC-V?

A: Someone must have seen its good momentum and then use it. But our focus is very clear-high-performance computing. So in our eyes, the leader in this industry is x86.

READ ALSO:   Intel has come up with a new way to compete with AMD.

Q: Intel has invested heavily in mobile technology and has worked intensively with many vendors. Is AMD also investing money to compete with the ecosystem built by Intel?

A: We think technology is key. Ryzen Mobile’s performance is important-we are working with the ecosystem to optimize panels and other components. But I think the ecosystem is changing, and I don’t think one person or company can define what the next generation of laptops will look like.

If you look at what Microsoft, Dell or HP are doing, you will find that they have their own ideas about the shape of the next generation of products. For AMD, our goal is to occupy a large share of the market, so we want to promote Ryzen Mobile and introduce it to ultra-thin devices, H series, and business, which is very important to us. I think we have a lot of opportunities for growth, and this is our goal.

Q: Do you think Intel ’s actions in manufacturing pose a new threat?

A: It has to do with their technology. We never expect others to fail to complete their plans when we complete them. We have made plans in the past five years. If we can maintain this development momentum, this plan will continue in the next five years. We’ve made some great choices, and it’s all about making choices at the right time. What market do you bring technology to? In what order? How to do it? We all need to continue because this is our key.

I expect we will have very fierce competition, whether it be in process, architecture or packaging technology. But I also look forward to AMD doing well, because this is our responsibility.

Q: For the past three years, AMD products have been released on a regular cycle of 12-14 months. Will we see Zen 3 this year? You’ve shared your 12-month roadmap before, but this year you only talked about the first and second quarters. Can you talk about Zen3 or any other product?

A: You should expect that AMD will be very active in making plans for CPUs. We think Zen 2 is the best CPU core available today, and we are very proud of it. We have completed this series, Zen 3 is doing very well, and we are very satisfied. You will see Zen 3 in 2020!