Recently, various rumours about new coronavirus pneumonia have been circulating on the Internet. When rumours spread, many people were blinded. Faced with another wave of new rumours, it’s time to make that fact happen!

Recently, the claim that “Harvard University lowered its flag at half-height because Li Wenliang sorrow” has spread not only on social media but also in news related to some portals. 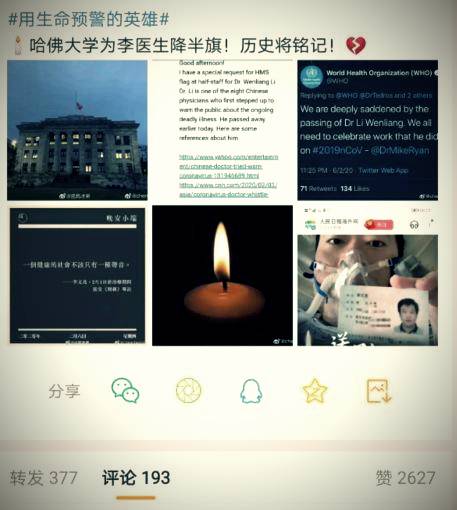 After multiple verifications, it was learned that although the medical school of Harvard University had indeed dropped its flag in the past two days, it was not lowered by Dr. Li Wenliang, but to commemorate Stephen P. Dretler, a well-known professor of Harvard Medical School who died on January 9 this year. 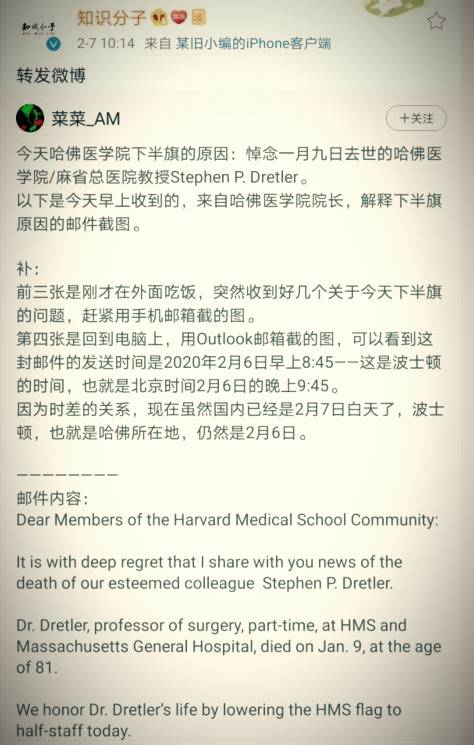 Currently, other media and Weibo have also confirmed that this is incorrect information. Weibo Station also explains the labels posted on the network.

Just as people expressed their condolences and respect for the “outbreaks of the epidemic”, some “travel” news about Dr Li’s family quietly spread on the Internet: “Pregnant wife infected with hospitalization” and “Doctor Li’s wife’s help letter” ….. 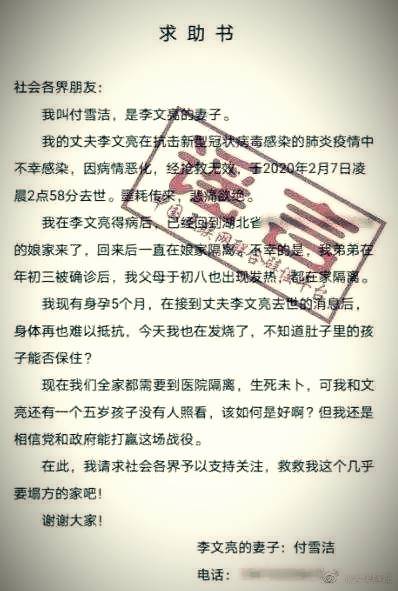 After verification by the Chinese Internet joint rumour platform, Dr. Li’s parents also became infected after contracting new crown pneumonia, but both have been cured and his wife is not infected.

On the same day, Dr. Li’s wife, Fu Xuejie, issued a statement on a social platform, stating that she would not accept any personal donations, and the information about her asking for help circulating on the Internet was false.

In response to rumours that the antiviral drug Radixivir had “significant effect” in Wuhan, Professor Cao Bin, deputy director of the China-Japan Friendship Hospital, which is in charge of clinical trials of the drug in Wuhan, told a China Youth Daily reporter this evening. false. 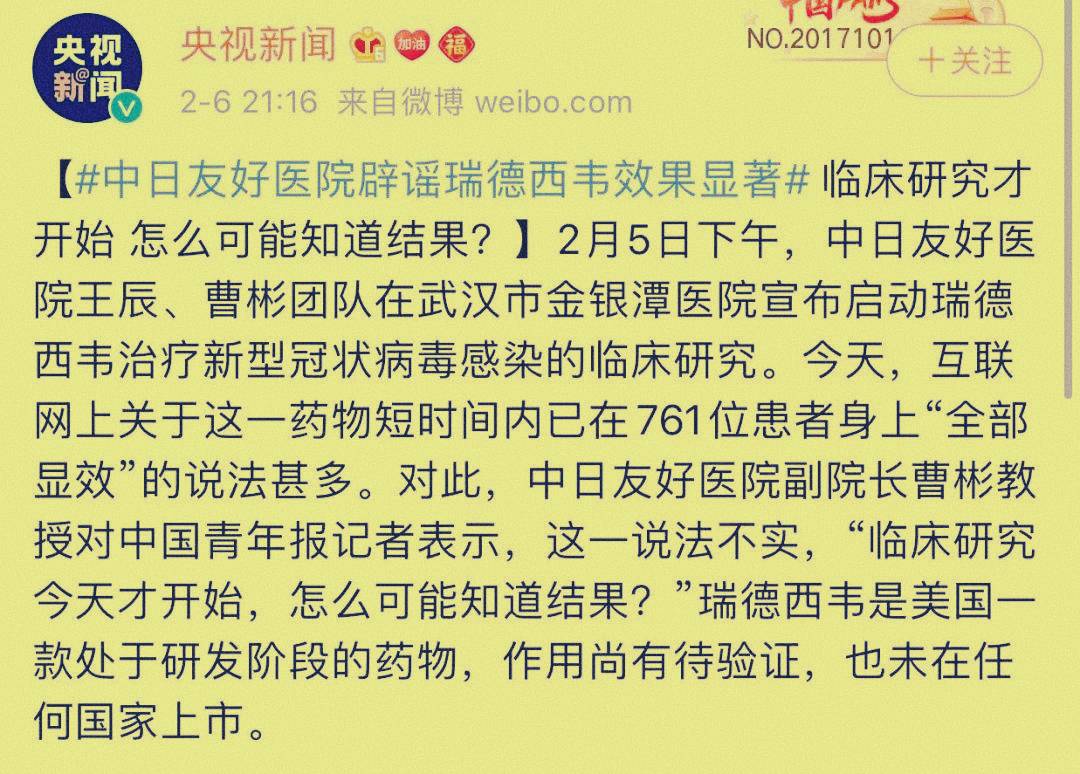 Rumour 4: New coronavirus is artificially made

Recently, an article published on the biopreprinted website bioRxiv stated that “the new coronavirus spinon protein of 2019 contains unique modes of interaction and contains (HIV) HIV-1 gp0120. And the gig is a weird match of protein. ” It is believed that the new crown virus can be unnaturally formed. 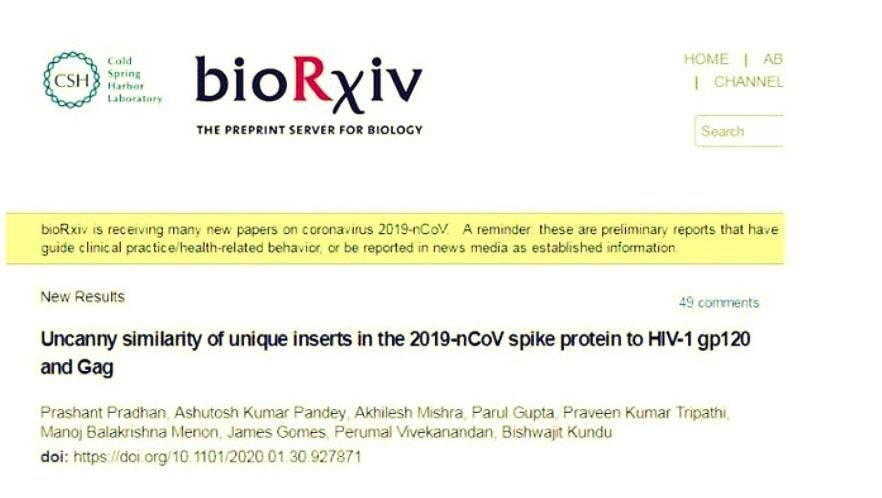 First, this thesis is a very rigorous and selective use of research data, there are no empirical data, no peer review, there is no official publication of the “three noes” paper, but the coat of professional researchers. Without professional judgment, many people find it difficult to distinguish between true and false.

Secondly, from the point of view of science and virus evolution, coronaviruses and HIV, which are retro-viruses, are very different, and the possibility of benign recurrence is not high because homology is very poor. It has nothing to do with HIV, nor can it be artificially introduced into a new coronavirus.

Rumour 5: New crown virus floats in the air to form a “virus cloud”

On February 4, WHO officials said: “People think the virus will float in the atmosphere, and under the” virus cloud “everyone will be affected by the virus. This is not true, the virus is spreading by droplets. Is.”

WHO needs to clarify the rumours because of the current panic, she said. 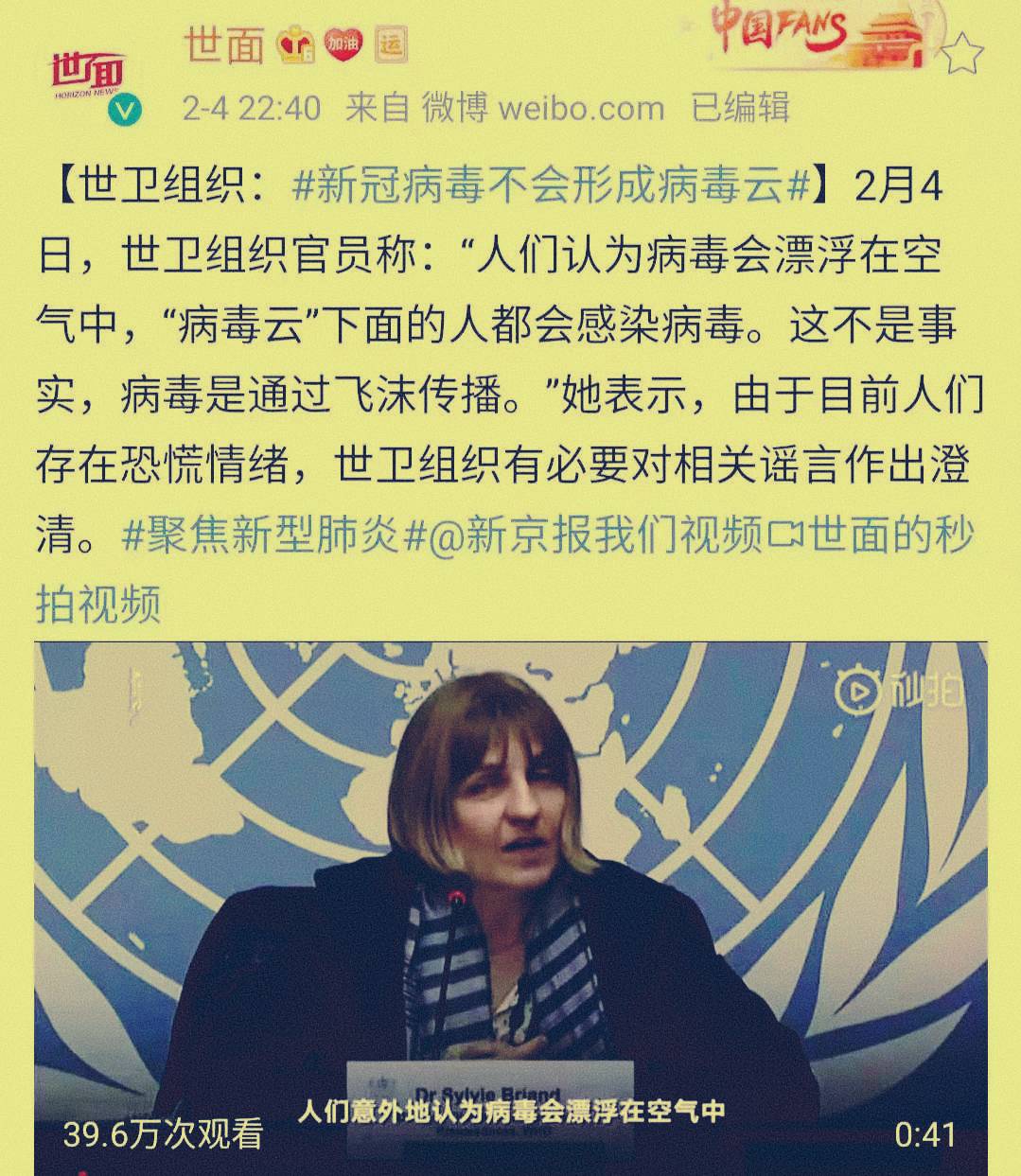 On February 5th, a ridiculous rumour came out in Liupanshui, Guizhou: A sow spoke at the white grave at Langya, Liuzzi District, Guizhou, telling the owner to cook nine eggs before dawn, to prevent epidemics.

As soon as the news came out, it was widely spread in the WeChat circle of friends. 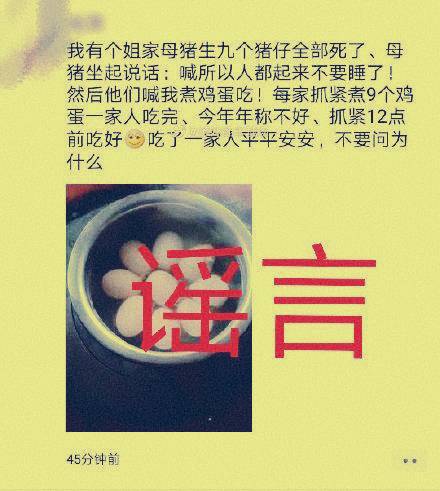 According to the information violator Zhu Moumou who published the information, he brushed a short online video at about 4 am on February 5th and saw a message saying that eating eggs can improve resistance, so he compiled a “sow speaks, The message “Eating eggs to prevent epidemics” was sent to two WeChat groups, leading to widespread information.

At present, Zhu Moumou was sentenced to 10 days of administrative detention by public security organs for spreading rumours.

Rumour 7: Tap water needs to stand for two hours before use

Recently, “in an unusual period, chlorine gas injection into tap water was raised to the limit, allowing each to stand for at least two hours before use.” This kind of misinformation was circulated all over the country by some netizens’ friends.

More than a dozen cities, including Beijing, Chongqing, Hangzhou, Zhengzhou, and Fuzhou, have released rumors: This is false, and the local tap water meets the national sanitary standards for drinking water, and citizens can drink it with confidence. 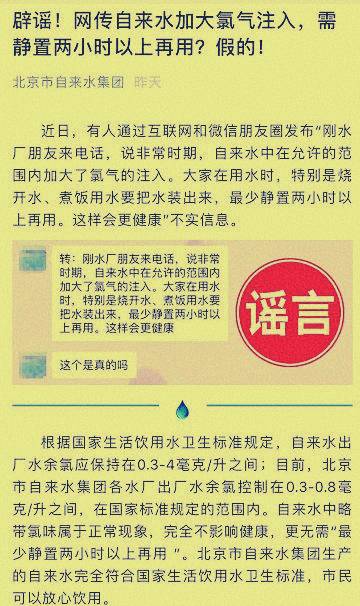 Philippine media reported on February 2 that the Philippine Presidential Palace expressed its gratitude for China’s donation of 200,000 medical surgical masks in the Philippines and the initiative to share the epidemic information. The report caused much controversy after it was widely disseminated. 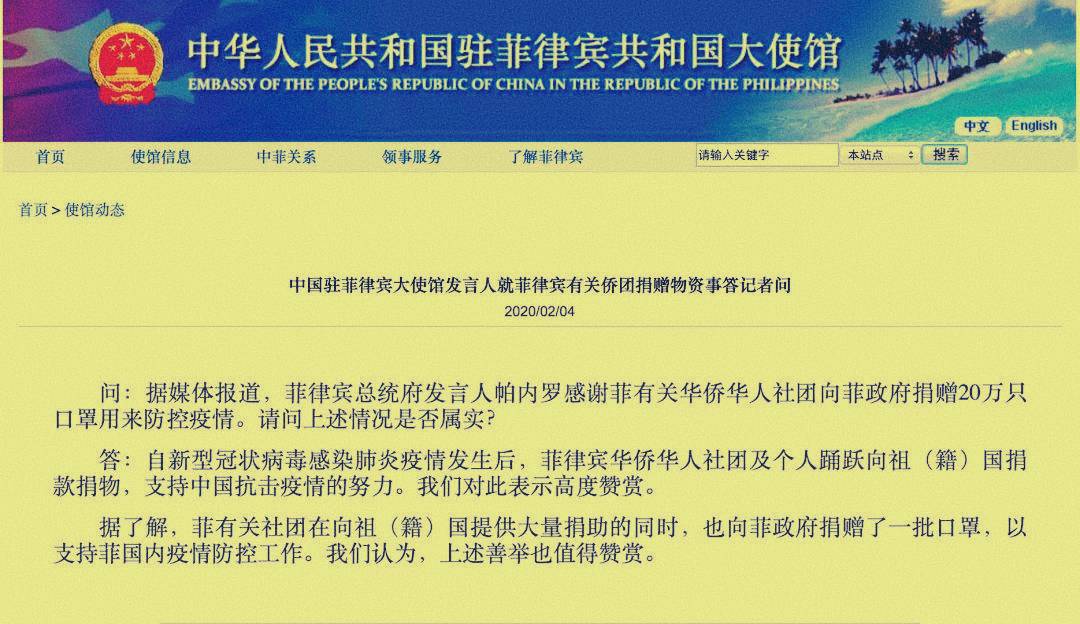 Recently, a notice on “avoiding the spread of immunization status, 12123 now handles traffic violations without points” has been circulating in many places across the country. 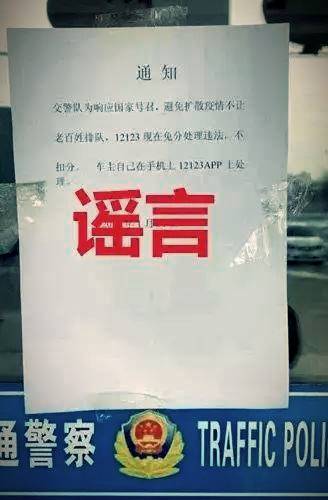 In response to a new coronavirus outbreak in China, U.S. Republican anti-China senator Tom Cotton has declared the virus a biochemical weapon leaked from a Wuhan laboratory.

His ridiculous remarks even detracted from the American media. The Huffington Post reminds readers not to listen to Corton nonsense.

Rumours about “new coronavirus as a biochemical weapon” have been rumoured academically by Chinese and foreign scientists before. In addition, the U.S. senator who made the false statement has always spread anti-China speeches, and this speech also needs to be viewed from his political standpoint.

Rumour 11: Comrades in charge of the Standing Committee of the People’s Congress of Guangdong Province contract new crown pneumonia

Recently, there have been rumours on the Internet that the Standing Committee of the People’s Congress of Guangdong Province is responsible for comrades infected with pneumonitis infected by the new coronavirus. After verification, none of the directors and deputy directors of the Standing Committee of the Guangdong Provincial People’s Congress was infected with the new crown pneumonia. All leading comrades were in the normal physical condition and were working on the job. 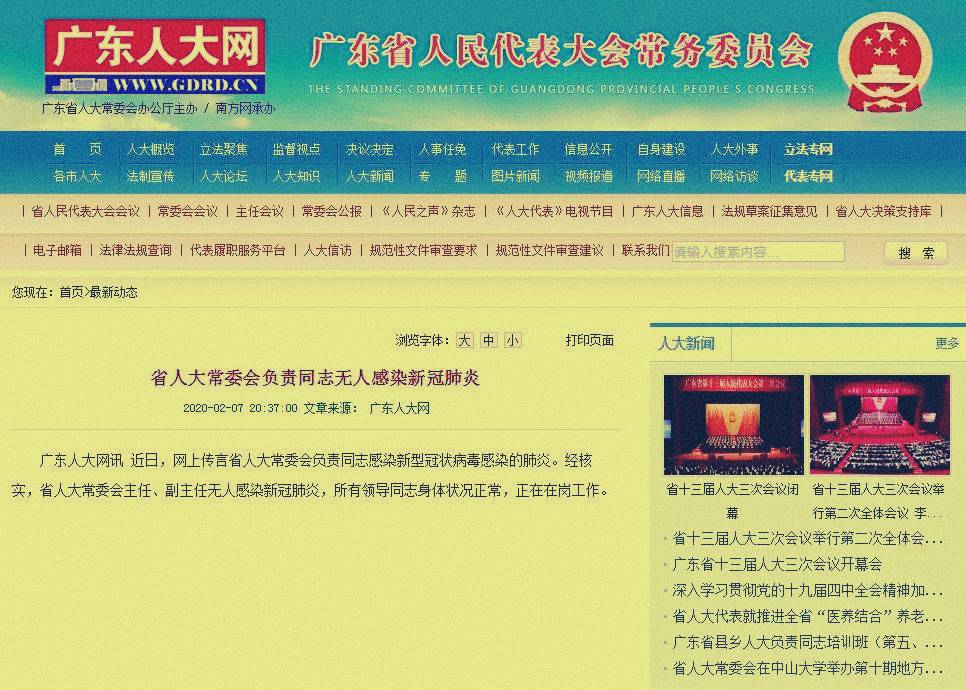 On February 7, according to the official Weibo news of the Chengdu City Management Committee of Sichuan Province, recently, a rumour was circulating in the social platform of the citizens of Chengdu.

It is rumoured that Chengdu will kill and disinfect large-scale arterial roads at 12 o’clock tonight Work, so the concentration of secondary disinfection solution is large, please stay at home after 10 tonight, do not go in and out at random, please close the windows and doors when sleeping. 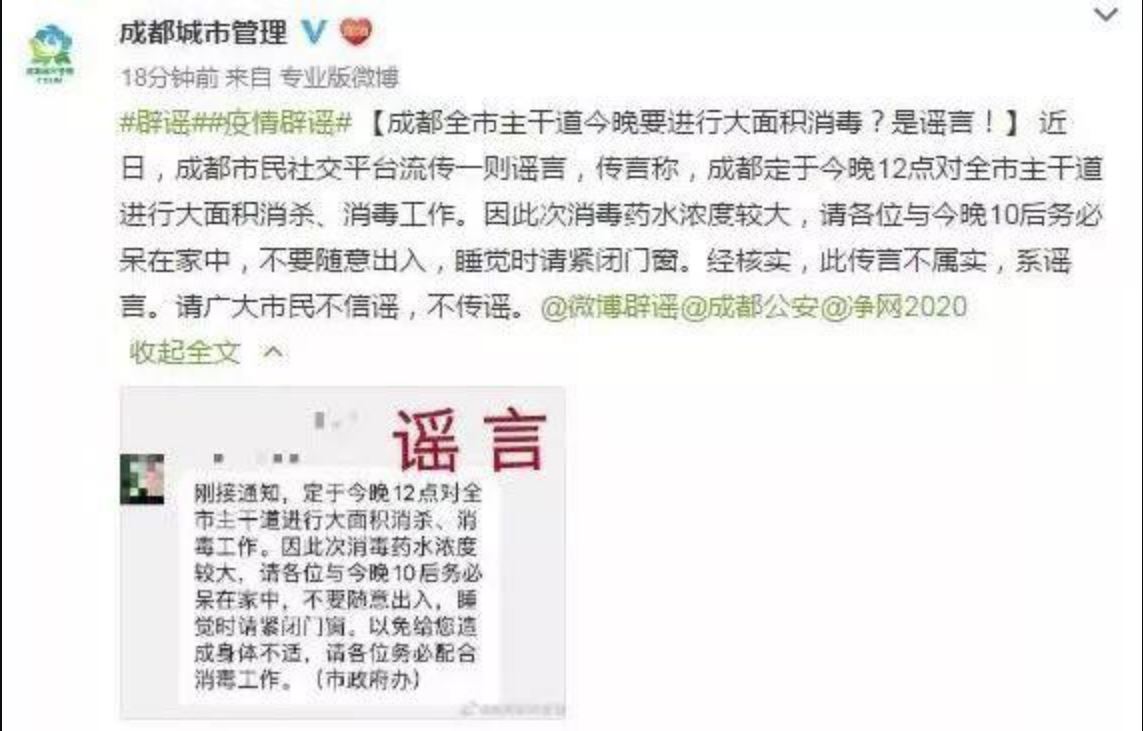 After verification, this rumour is not true, it is a rumour. The general public is requested not to believe or spread rumours.

On February 7th, it was reported that “postal, SF and JD.com three companies could retain express delivery services until 24:00 on February 6, and cease delivery operations from February 7, and stop all courier and delivery vehicle operations. Recovery time will be notified separately.”

The Hubei Daily reporter confirmed that the news was pure rumours. At present, the three companies of Post, SF and JD Logistics are operating normally and will not stop delivery services.

During the epidemic, China Post promised “four uninterrupted and four free”, which included uninterrupted investment services to ensure that all types of mail were collected and delivered. SF rumoured that “SF Brother is always online”. JD said that the news was not true.

Both the Hangzhou Xiaoshan Market Supervision Bureau and the Medical Insurance Xiaoshan Branch said that no such notice had been issued.

The staff of the District Market Supervision Bureau and the Medical Insurance Xiaoshan Branch also verified all the operating pharmacies in the area where netizens responded. The pharmacies stated that they had not said anything similar.

Rumour 15: Many buses in Hohhot burned due to high alcohol disinfection

On February 4th, a small video was circulated in the circle of friends of the citizens. In the video, a row of new energy buses was lined up in sequence. Some buses were burnt black, swollen, and the front was completely burned. In the forwarding process, some netizens said that “due to the high alcohol disinfection concentration, more than ten cars were burned.” 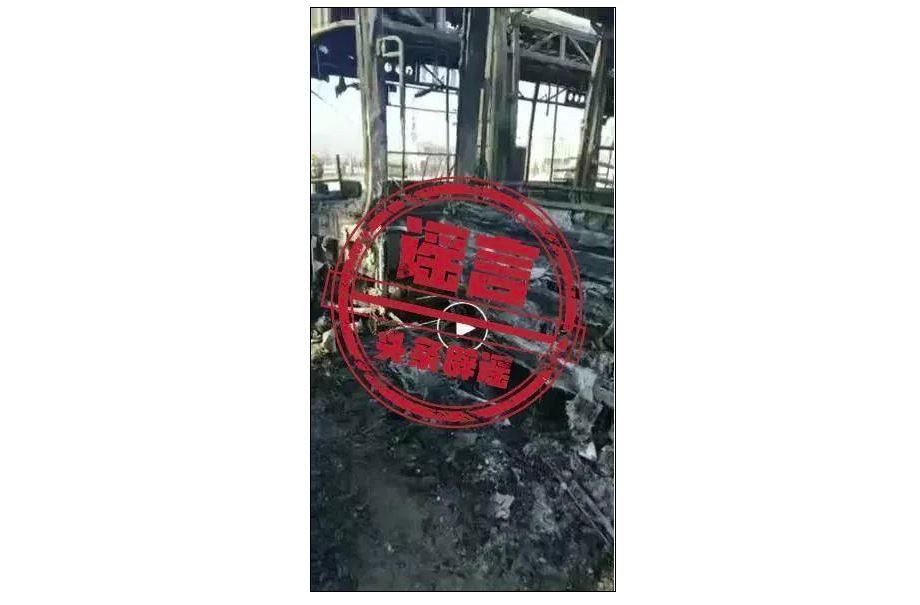 The staff of the Hohhot Public Transport Corporation told the Northern News reporter: “The Internet reported that the cause of the fire due to alcohol disinfection was not true. After the accident, Inner Mongolia Minfu Woengeng New Energy Automobile Co., Ltd. is actively handling related issues.”

Hohhot Public Transport Corporation stated that the fire was caused by the high voltage battery of one vehicle spontaneously igniting on February 4th, causing 5 parked vehicles to be severely damaged by fire, and another 3 were slightly damaged, with no injuries. The message is totally inconsistent.

Rumour 16: Yinan man in Shandong plans to return home to get revenge

Recently, a man in Yinan, Shandong, claimed to be in quarantine after being infected with the virus in Wuhan and planned to flee Wuhan to return to Yinan.

Since January 28, 2020, in order to achieve the purpose of attracting the attention of others, we have sent mobile phone and other location information of Wuhan hospitals within WeChat groups and WeChat friends, and fabricated our own infection in Wuhan. The virus has been isolated. Rumours of fleeing Yinan from Wuhan and claiming to return to revenge, spreading the epidemic to those who hate him, and so on.

The man has been detained criminally because his behaviour has caused panic among many people and severely disrupted social order. 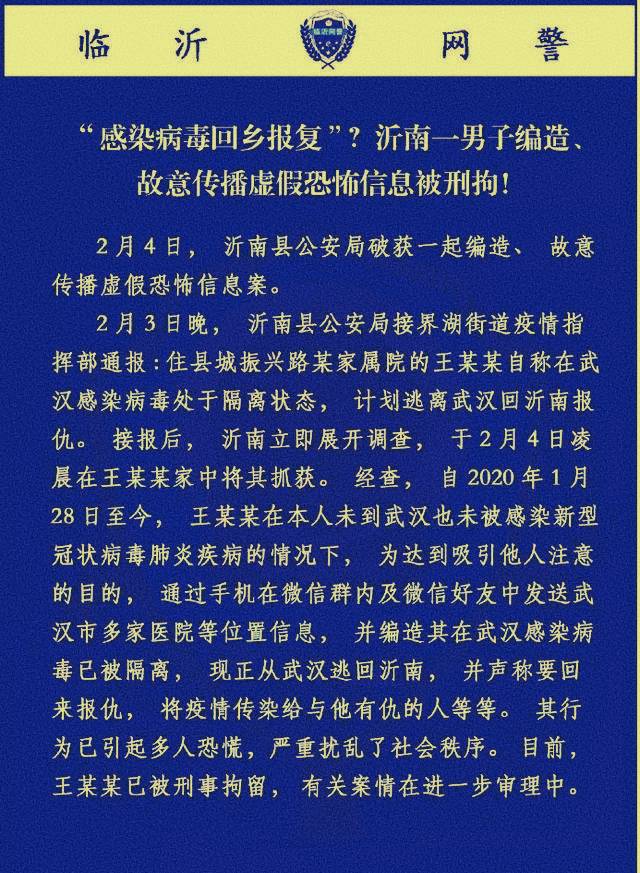 Polish your eyes to distinguish right from wrong. Do not believe rumours, do not pass rumours. Unite as soon as possible to overcome the epidemic!

Coronavirus Update: Li Wenliang, life and death are suspected, many parties mourn the death, Wuhan hospital said that it is still rescued?