According to statistics, there are currently around 160,000 ventilators in national hospitals in the United States, and only 12,700 ventilators are used as national strategic resource reserves.

In the worst-case scenario, 160,000 ventilators are clearly inadequate for many affected patients, according to the data prediction model.

In this case, on March 22, US President Trump stated on Twitter that Ford, GM, and Tesla had been approved to manufacture ventilators and other medical equipment.

Today, California Governor Gavin Newsom reports that Tesla CEO Musk has delivered a thousand ventilators to Los Angeles authorities to meet the demand because of the new coronavirus outbreak.

After that, Musk tweeted that China has more room. They purchased 1,255 ventilators from China and shipped them to Los Angeles to help American medical facilities suffering from a new pneumonia epidemic. 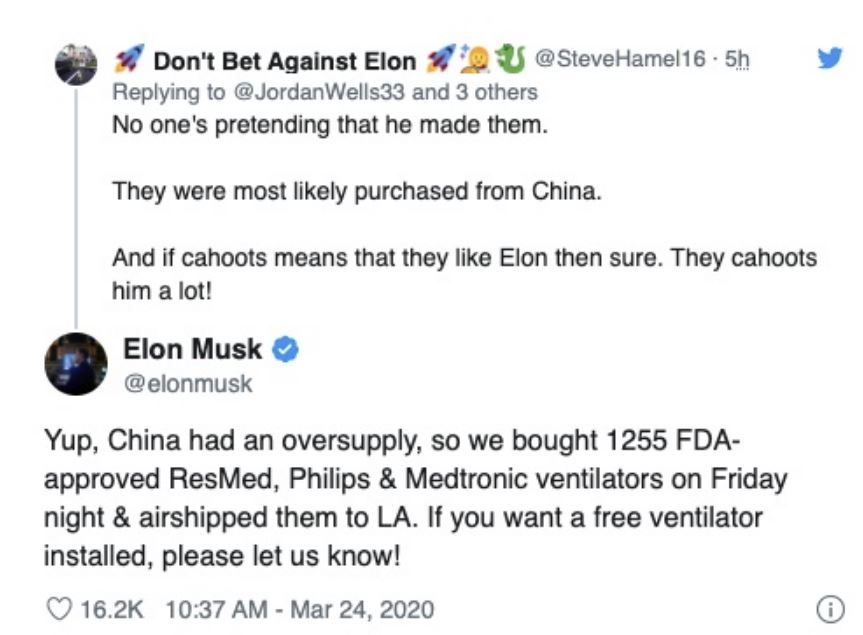 It is understood that Musk said on social networks March 20 that Tesla and SpaceX employees are “researching ventilators” and that the distribution of about 1,200 ventilators is expected to be completed by this week. Delivery, installation, and operation of the ventilator was the most difficult part, he said.

It is noteworthy that, in addition to US car companies, to convert ventilator production, the British Government needs to switch from domestic large car companies to ventilator production. In addition, Honda, Toyota, BMW, Jaguar Land Rover and other factories in the UK have indicated they will support the British government’s disaster prevention and control work and manufacture of medical devices, including ventilators.

READ ALSO:   What is the solution of Red West to the red of China?

What is the difference between Redmi K30 Pro Standard Edition and Zoom Edition?