Ross Young said that the Apple iPhone 12 Pro and 12 Pro Max smartphones will indeed receive screens with an image refresh rate of 120 Hz.

The list of smartphones with 120 Hz screens that will be released this year also contains the unannounced Huawei Mate 40. Which should go on sale in the fall at about the same time as the iPhone 12 line. 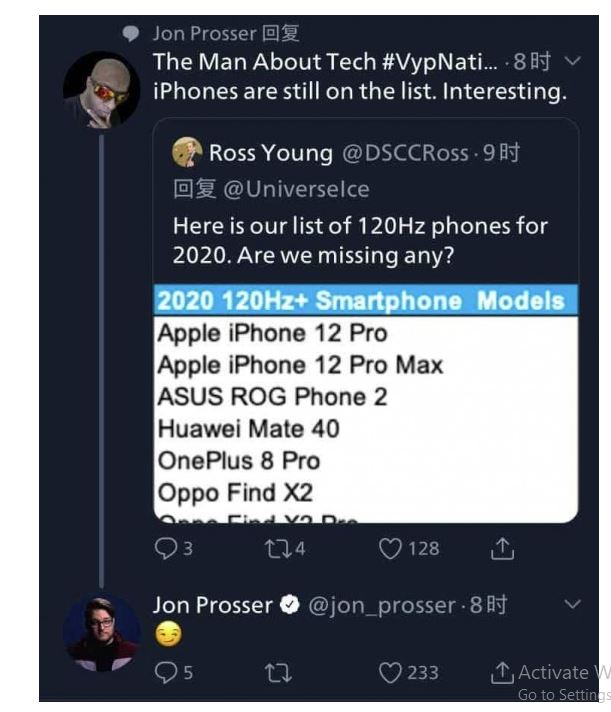 The source pointed out that in the iPhone 12 lineup, a screen with a refresh rate of only 120 Hz will only be received by the iPhone 12 Pro and 12 Pro Max models. And the iPhone 12 is likely to maintain a 60 Hz display (LCD or OLED is still unknown).

At the same time, the battery capacity of the old version can reach 4400 mAh. While the iPhone 11 Pro Max can receive a 3969 mAh battery.

According to Dan Ives of Wedbush Securities, there will be no headphones in the iPhone 12 retail package. According to reports, this move aims to increase AirPod sales and may result in the transfer of another 20 million AirPods units.

It is worth noting that, as past insiders have revealed, the four new models of the iPhone 12 series will adopt a thin and light design this year. In addition, according to the latest information provided by the supply chain channels. The iPhone 12 series product line will be better than the iPhone 11. Even the 6.7-inch version is only 7.4 mm thick, which is about 10% thinner than the 8.1 mm iPhone 11 Pro Max.

READ ALSO:   Scientists warned of the risk of re-infection with coronavirus

Of course, the side effect of the thinner body is that the battery life will not be ideal. Although the iPhone 12 series uses a new multi-layer stacked motherboard design. And in this regard may increase battery capacity. According to information disclosed by people familiar with the matter, the battery capacity of the two new models of the iPhone 12 Pro series will not exceed 4400mAh.

The expected launch date of the iPhone 12

The fastest sale in October. More importantly, the analyst also said that the supply chain problems caused by Apple have been resolved.

More importantly, the analyst also said that the Apple supply chain problem caused by the epidemic has been resolved. And this year’s new iPhone will be released in early October. This means that if the iPhone 12 Pro series is not significantly delayed In the case of shipments, the argument that the 120Hz refresh rate appears again may be related to this. Of course, the authenticity of the above news has yet to be confirmed. And the iPhone 12 series has just entered the DVT design verification stage, and the possibility of reversal will still occur.