This has been confirmed by Apple’s official advertisement.

Today, Apple will host an event for WWDC 2020 developers and is expected to release an important hardware announcement and a large number of software-iPadOS 14 and new versions of WatchOS and macOS. But the most important premiere is the appearance of the iPhone 14 operating system instead of iOS. If it is difficult to believe such rumors at the beginning. All questions will disappear after the iPhone OS advertisement appears on the Internet.

The video was posted on Twitter by well-known insider Max Weinbach. In fact, he was one of the first to announce the possibility of renaming iOS to iPhoneOS. And, interestingly, Max refused to believe it to the end. Now, obviously, he accepted the new destiny of the operating system.

Therefore, from the video point of view, iPhone OS 14 will replace iOS 14. At the same time…except for the new wallpaper, nothing will change. It really is-we will know soon.

Jhon Prosser talks IOS 14 will be renamed to iPhone OS

The news reported by @Jon Prosser, the well-known Technology Informant. According to him it is relatively simple, but the iPhone OS cited in the statement should mean that iOS 14 will be renamed iPhone OS to meet us ahead of WWDC 2020. Not only that, but a screenshot posted by anonymous netizens seems to confirm this claim. And the advent of iPhoneOS 14 seems to be strong evidence.

READ ALSO:   What Apple has missed talking about iPadOS and iOS 14 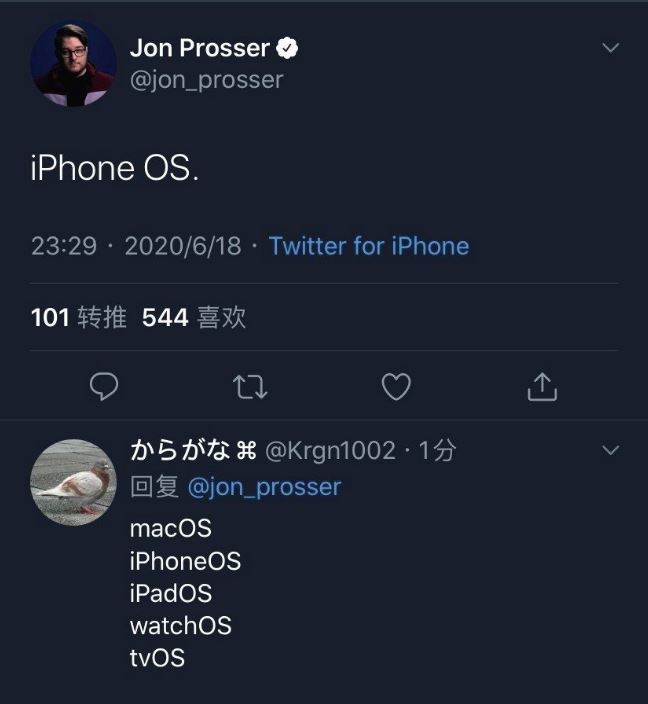 Although the authenticity of the above information has not yet been verified, the system that was installed when the first iPhone was released was called the iPhone OS. And then renamed to iOS when the first iPad was released in 2010. However, with the debut of the iOS 13 system, Apple divided the iPad OS. So Apple seems to be determined to further differentiate the iPhone and iPad systems and help in future marketing of the operating system. In addition, all Apple products already have iPadOS, macOS, tvOS, and watchOS. And this time, it seems, needless to say, return to the iPhone OS.

iOS is clearly ahead of Android in device update speed

According to the latest statistics, considering the time when the firmware is released, at present, 81% of Apple mobile devices have been upgraded to iOS 13, which is a record high.

13% of users still use iOS12. In the past four years, 92% of iPhones have been upgraded to iOS 13, while only 7% of users are running iOS 12, and another 2% are running on earlier versions of the system.

Although Apple has not released the latest iOS installation data since January this year. There is no doubt that more and more people are using iOS13. According to previous official data, as of the end of January this year, more than 77% of users have upgraded to iOS 13. iOS 13

Apple is expected to release iOS 14 tomorrow, and this version may be available under the name of iPhone OS 14.

Facebook has also become too much blocks Trump’s advertising