With the Apple Pencil, Apple already offers one of the best digital pens in the world. The new patent now provides information on a new feature that can be seen in the next-generation Apple Pencil.

Apple can work on an exciting new feature for the iPad (Pro). According to the report, in a future version of Apple Pencil, an advanced sensor that the digital stylus uses to recognize real-world colors can be integrated.

The second-generation Apple Pencil (around € 128 on Amazon) hit the market in 2018, but innovation was limited. The highlights were the ability to charge the pen wirelessly when magnetically attached to the side of the iPad Pro (from € 879 on Amazon) sit … The flattened side had the great advantage that the handle could no longer roll off the table as quickly.

US Patent and Trademark Office (USPTO) document describes a clever color recognition function for the Apple Pencil in more detail.

It is common knowledge that Apple – mostly in secret – is constantly working on improvements and innovations for its entire range of products. However, from time to time, several years before the presentation of the technology, information reaches the general public. This is exactly what may have happened quite recently: A document published by the US Patent and Trademark Office (USPTO) entitled “Computer System With Color Sampling Stylus” describes a clever color recognition function for the Apple Pencil in more detail. 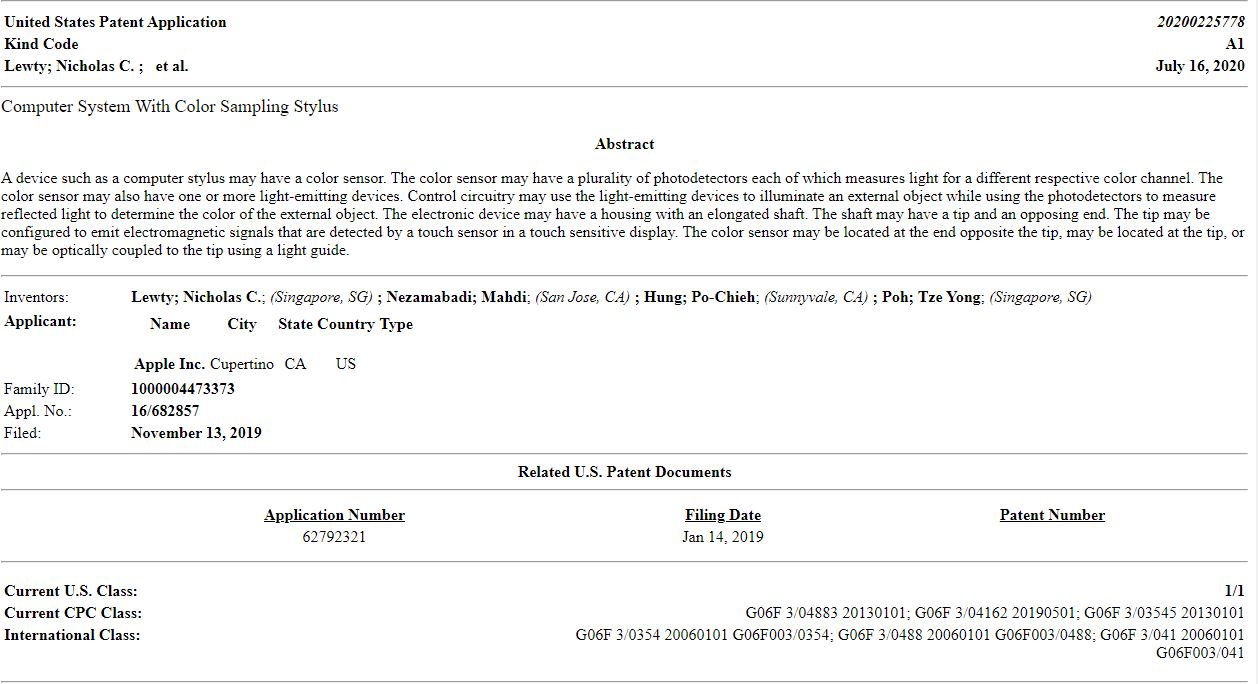 According to the patent, which was filed on November 3, 2019, and published July 16, 2020, this sensor can be placed either on top or behind the Apple Pencil. The sensor can also be LED-supported so that colors can be measured as accurately as possible from the original, even in low light.

READ ALSO:   iPhone 12 Pro: Is there still a chance for a 120Hz ProMotion display in Apple's next flagship?

Such a sensor can help both artists and graphic designers, as colors can be obtained directly from the Pantone fan, which can save a lot of time. As usual, it’s unclear if Apple plans to integrate this feature into a real product.

A novel sensor in the pencil tip

According to available information, Apple has already filed a patent application with the U.S. government in November 2019. He doesn’t explicitly refer to the Apple Pencil. But the drawings on it represent an input device that is very similar to the famous iPad digital pen. The big innovation is the color sensor built into the pencil and the corresponding detection technology. A photodetector and a small light bulb are located at the tip of the intended pen. The latter is probably for more accurate color recognition. Electronics for processing data collected in this way is located at the end of the pen.

The benefits of integrating color definition into the Apple Pencil should be especially apparent to artists and creative professionals. For example, you can use the pen to record the exact color of a real object and use it in a drawing application or other programs for your work. In addition, the function can also generally help with accurate color calibration for screens and printouts. Or, to help the user know the specific color of a cosmetic item.

Despite every conceivable possibility of this technology, Apple’s patent application does not mean that a properly equipped pencil will actually hit the market. However, based on past experience with comparable patent applications, there is at least a good chance of doing so. The patent also shows where Apple’s thinking about the Apple Pencil is headed.

READ ALSO:   How is the Coronavirus being prevented in Pakistan?