While fans are still waiting for other details about the PlayStation 5 that Sony has so far kept under wraps. The new certification reveals that the console is equipped with Wi-Fi 6 (802.11ax) MIMO and Bluetooth 5.1. Which means the hardware is nearly complete.

The Sony PlayStation 5 was recently certified by the Peruvian government and the app reveals some interesting details about the next-generation console. The module with model number J20H100 was previously registered with the FCC in the US, it is now clear that the PS5 Wi-Fi 6 supports MIMO and Bluetooth 5.1.

Both represent an upgrade over the PlayStation 4 Slim (around € 240 on Amazon), which was still limited to Wi-Fi 5 and Bluetooth 4.0, and especially compared to the old PS4, which only came with Wi-Fi 4 and was equipped Bluetooth 2.1. The new WLAN standard offers a theoretical maximum speed of up to 9.6 Gbps, and MIMO (multiple inputs, multiple outputs) can further improve data throughput and latency.

In turn, Bluetooth 5.1 may be more useful for locating objects, because it can send the exact location of a device with an accuracy of centimeters, in addition to identifying the direction of the signal emitter. It may be easier to find a lost DualSense control

In addition, the system mentions that this component is for a “game console”:

Wi-Fi 6 should also provide a more stable connection, especially in difficult environments with many different networks. Which can make a wired connection unnecessary for many clients. And that should be good – Sony has yet to reveal what connections the next-generation console will have.

The PlayStation 5 will launch by the end of 2020 with a fast SSD, 4K gaming support at 120fps, 3D audio, and DualSense controls with haptic feedback and adaptive triggers. It will compete directly with Microsoft’s Xbox Series X. More details on the technology are due to be announced soon, with the console rumored to be shipping on November 13th. 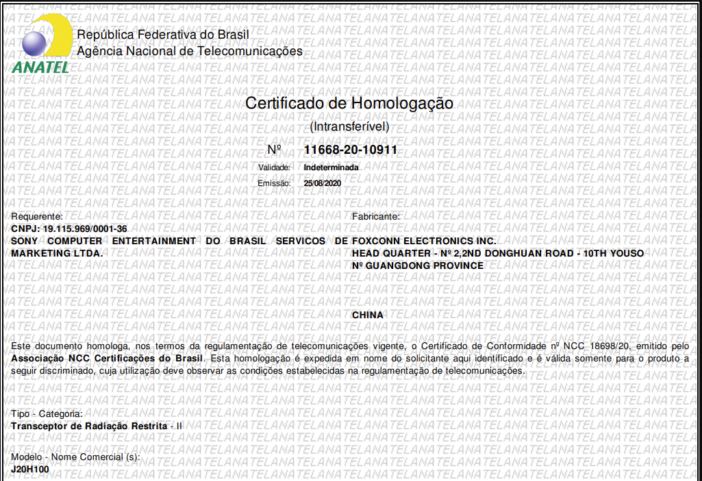 Poco X3 leak: Xiaomi midranger should start on September 8 with the new Snapdragon 732