The gaming-friendly Snapdragon 730G is responsible for everything on the Mi Note 10. This is not the fastest chip today, but it is the most current mid-range option. 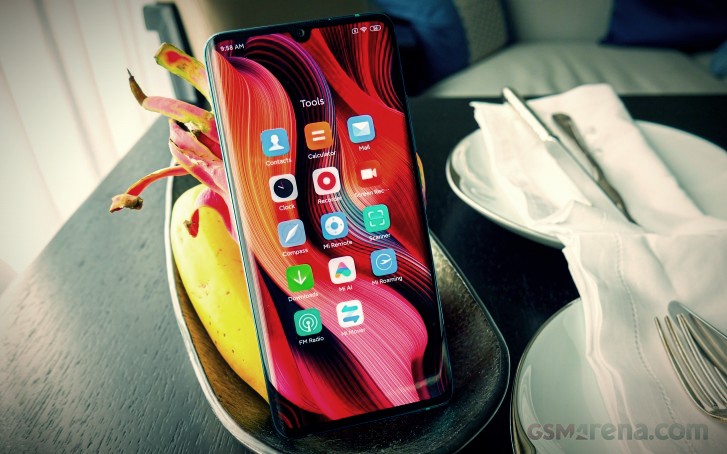 The MICC9 also has a 5.270 mAh battery that can quickly charge up to 30 watts, allowing you to fully charge the battery in just 65 minutes.

Finally, the phone comes with MIUI 11.

Recently, we reported the detailed characteristics of a very curious Xiaomi Mi CC9 Pro with a Penta camera (including a 108-megapixel sensor). which will announce on November 5 (and it seems that it will be released on the international market on the 15th under the name Mi Note 10). The company has already revealed details about camera sensors. A dual optical stabilization system, a Snapdragon 730G chip, a 5260 mAh battery with fast 30-watt charging, an on-screen fingerprint sensor and much more. 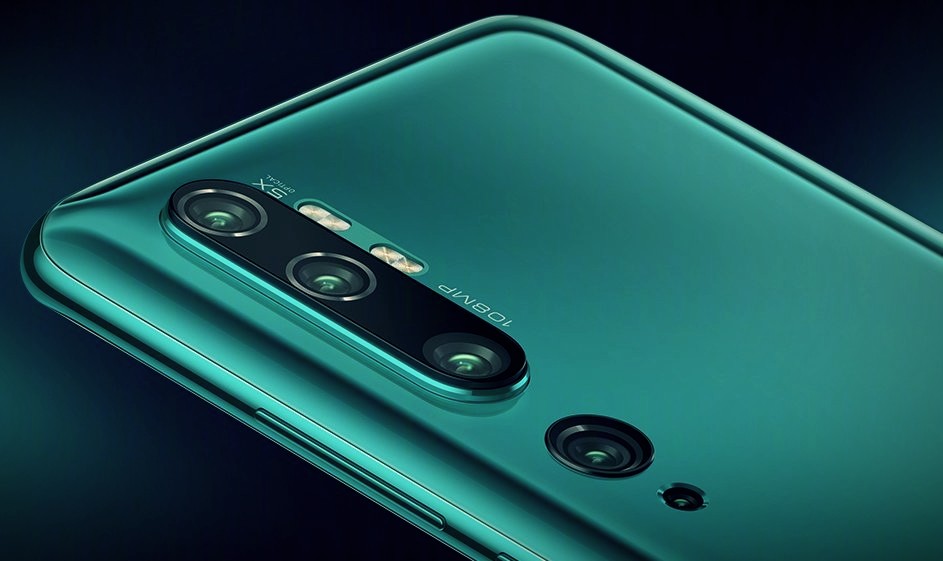 Now the manufacturer decided to provide additional details about the device. For example, it will be the first smartphone in the world on which an ultra-thin sub-screen fingerprint scanner installed, thereby increasing the accuracy and sensitivity of the sensor. Unlocking the device will be easier even at low temperatures with dry fingers.

Secondly, the device equipped with NFC support, so fans who use a smartphone to payment can take a closer look at this decision. Another notable plus is the integration of an infrared emitter at the top for controlling household appliances using the Mi Remote app.

Now in China, the official Xiaomi event is in full swing, at which the company announces its new products. And the most important such product was the Xiaomi CC9 Pro. 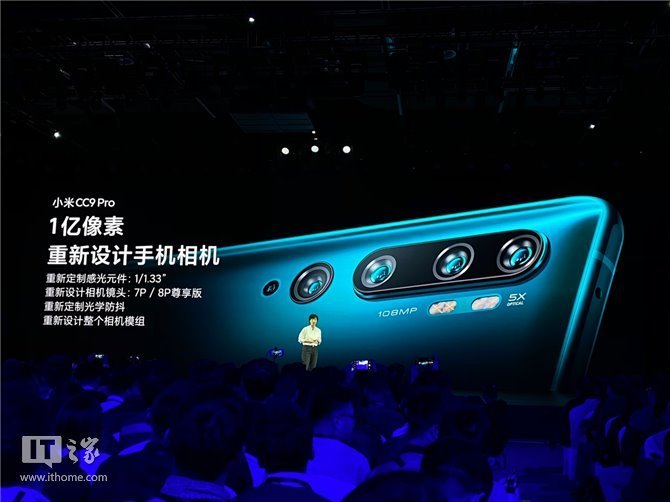 This model does not have a flagship platform (although the Snapdragon 730G is good for the middle segment. It’s not the Snapdragon 855 Plus), but it has a camera and a super accumulator, and in general, the other parameters are well balanced.

In general, all the characteristics of the camera became known last week. But since the smartphone is not the most ordinary, it makes sense to repeat them. The main sensor of the CC9 Pro camera is the 108 megapixel S5KHMX. It connected to an aperture lens with an aperture of F / 1.69. There is also a module for portrait shooting (a 12-megapixel sensor and a lens with a focal length of 50 mm). A module for macro shooting (minimum focusing distance is 1.5 cm), a module with an ultra-wide lens (with a viewing angle of 117 °). And a resolution sensor of 20 MP, as well as a module with a telephoto lens – it provides a 10x hybrid optical zoom. There is also a 50x digital, but the first one, providing the best quality, should be enough for everyday situations.

Moreover, Xiaomi focuses on audio capabilities: the device. For example, equipped with a large acoustic camera with a volume of one cubic centimeter. Due to which the sound volume promises to be twice as high as in the previous generation. Besides, the device has retained the traditional 3.5 mm audio jack and supports high-quality Hi-Res sound. 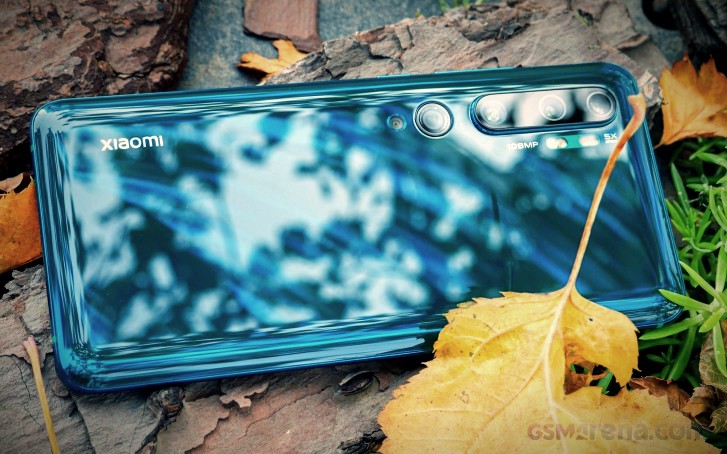 Certification bodies mention only two image sensors – with a resolution of 108 and 32 megapixels. But we already know all the details about the camera model. Mi CC9 Pro did not get support for memory cards and Android 10 (although the corresponding update for this model will not be delayed). But it does have an IR emitter and a 5170 mAh battery.

MICC 9 attacks us for being too familiar. The only thing that comes out is the extraordinary balance between the curves of the front and rear windows.

In addition, if we have ever seen, this is an ordinary glass sandwich construction. The MiC9 has 5 panels in the front and back of the Gorilla Glass, all covered in a thin strip of an aluminum frame.

All keys are located to the right of the frame above, as well as a dual SIM tray. At the top, there is a regular IR blaster, and at the bottom – everything – a speaker, a USB-C port, a microphone, and an audio jack. 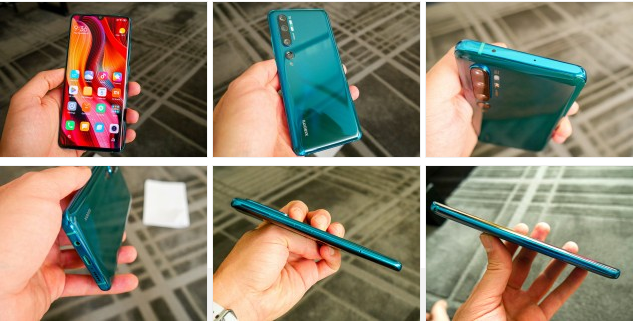 We have a version of Aurora Green here, but frankly, in 1/3 of the time, it began to look blue, not green. This is a really attractive color and a very interesting dynamic style under the surface. 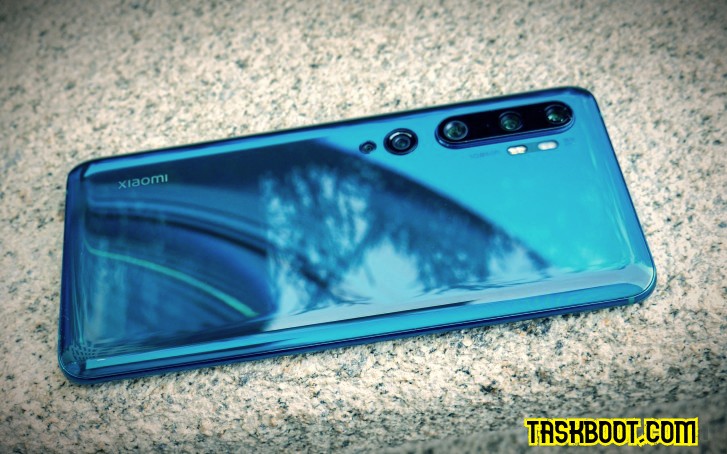 The back is incredibly slippery, but its sides are not, and it is easy to handle with one hand, even if it is heavy (208 grams). 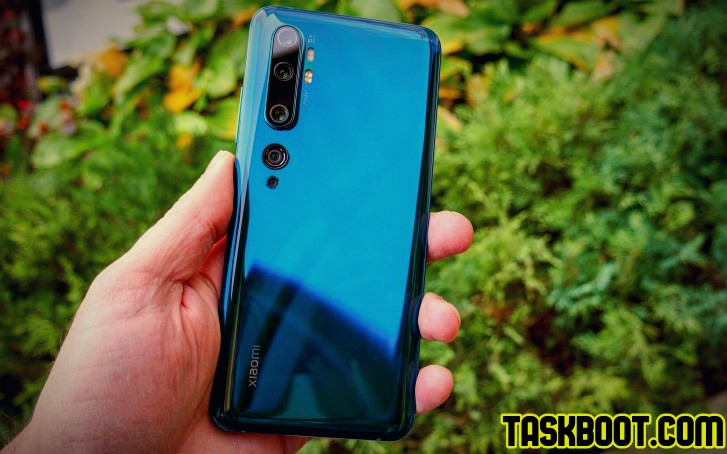 Cameras take up a lot of space at the back of the phone, so we often inadvertently find that the bottom two fingers are covered by their fingers. But we think you can get used to it on time. 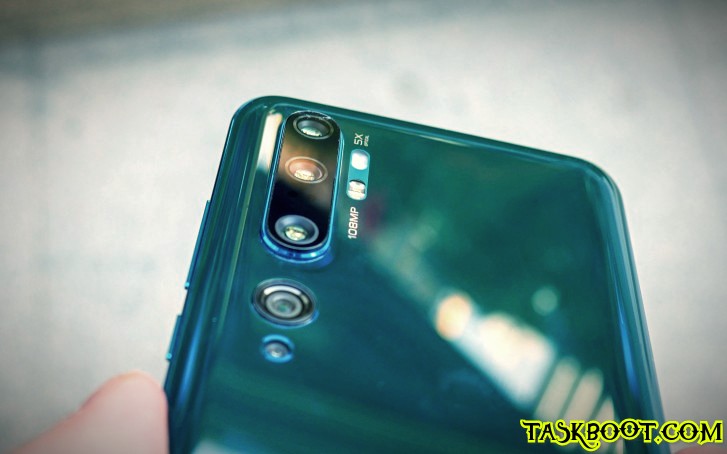 Although it is heavy, the MICC9 Pro is not too heavy, and we find its curves very attractive. This is definitely one of the best smartphones, and we really want it to have the best water resistance to make the whole package even better.

The MICC 9 Pro screen has a 6.47-inch emulsion panel with curved edges, rounded corners, and a small waterproof shape for a 32-megapixel selfie camera. 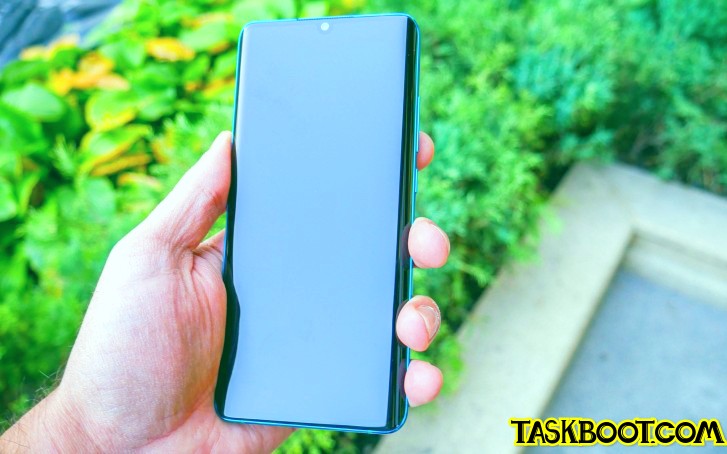 The rotating front glass (3D-display, as Xiaomi, calls it) influenced the screen – accidentally there were problems with contacts. The bailout works great, and the camera app had problems. It is difficult to make this image without a case because you do not need to try to hide the lenses or touch the edges of the screen.

The screen resolution is 1080p +, and in terms of sharpness, we have no problems with it. In addition, in combination with the Snapdragon 730G, 1080p resolution should provide excellent frame rates for the game.

Xiaomi MiCC 9 Pro comes with the latest version of MIUI 11 at the top of Android 9. We were hoping that a new device with Android 10 should appear at this time, but it seems that Chinese consumers are not thinking about having the latest OS, such as western users. 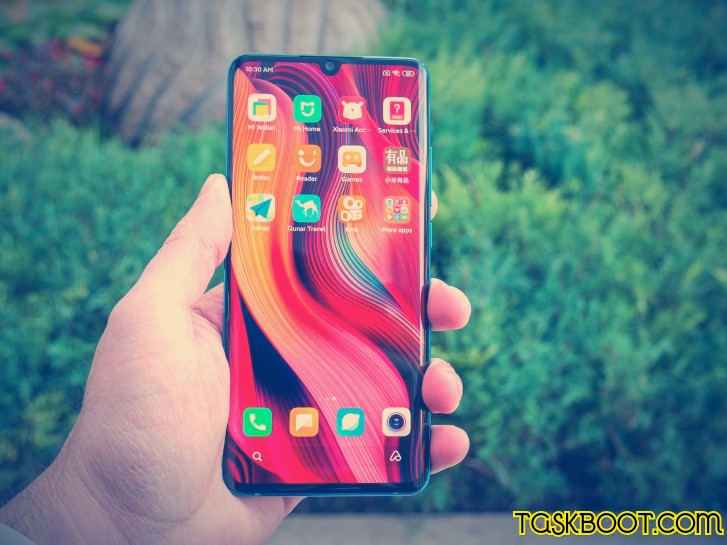 Xiaomi claims that the fingerprint scanner under the display is 88% thinner than the previous generation. Which gives extra space for things like a battery. The identification area is 10% larger than it should be faster and more accurate than in the previous version that we used on MI9T.

So far, everything is working fine. It will take a little longer to configure, but once this is done, this thing just flies away. 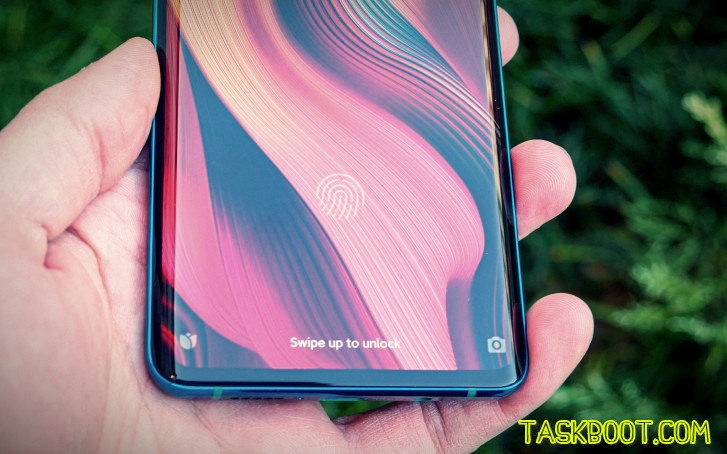 Xiaomi MiC9 Pro has an integrated 8nm Snapdragon 730G chip that powers it all. This, of course, is not the flagship processor, but the latest and newest Qualcomm mid-range chipset. Ji in the title means it is perfect for gaming. GPU watches are 15% better than the vanilla SD730.

Xiaomi Mi 9T Pro is characterized by a large and frameless AMOLED-screen, which has no cutouts thanks to the traveling front camera. The resolution of 2340 by 1080 pixels provides a sufficiently clear image so that the user can comfortably read, watch photos and videos

Design and dimensions of the Xiaomi Mi 9T Pro case

The back of the MiC9 Pro looks like a Mi9 because it has a great piece of camera. It also has a three – 5x zoom camera, a 2x zoom camera and a basic 108-megapixel camera – out of five snipers. In addition, there is a 20-megapixel ultrasound with the backside and 2-megapixel macro photography, and both have autofocus.

The rear panel of the MICC9 Pro has two dual LED flashes and a camera. One of them has transparent glass in front, and the other is light, while the other is it. Provides soft, flat light for portraits in moderate lighting

One of the MICC Pro camera systems interesting things is that the 5x camera uses an 8MP sensor, not the lens itself. which explains how they fit into the phone without using the Periscope zoom system. Were able to do this. To achieve a 5x magnification, the camera cuts off the core of this 8-megapixel sensor and captures an impressive 5-megapixel image with 5x magnification.

MICC Pro camera system software accepts a 5-megapixel image up to 8 megapixels, and you get a 5x output from the camera. According to our estimates, Xiaomi suggested that 5-megapixel images would not match the target audience. But then why not start marketing the camera as an 8-megapixel camera? We really don’t know. 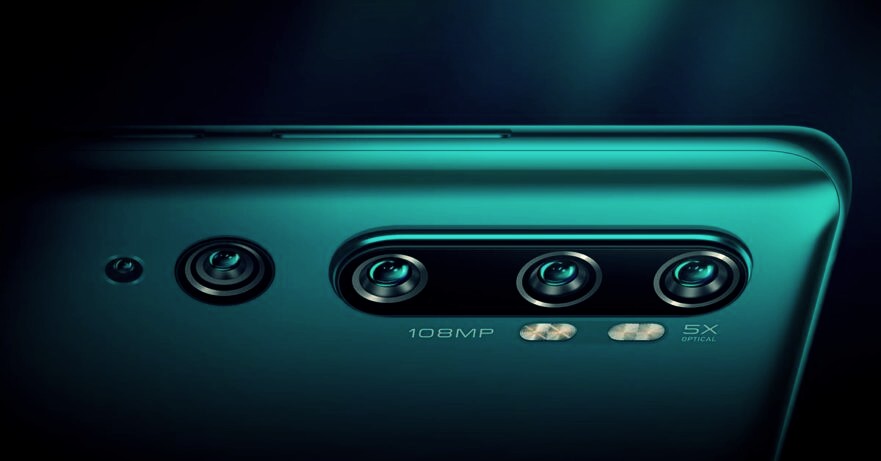 The camera is equipped with a 2x zoom, and this is real optics, so it works properly. There are also wide-angle optics, and there are no problems with it either. The front camera is very good, but the LED flash is not enough.

And these are promising camera models. Photos taken by Central Kim were taken with a resolution of 27 megapixels, as we believe that this will give the best possible results. We will add 108MP images later in the set. 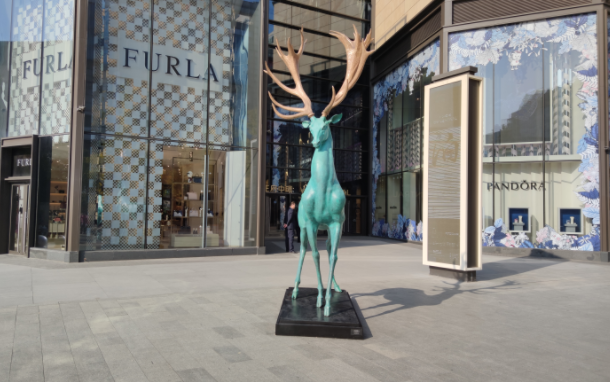 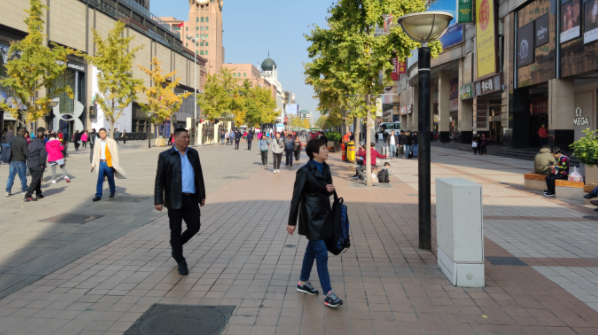 The MICC9 Pro also comes with a new camera night mode or 2.0-night mode, as they say. Night mode 2.0 stacks RAW frames in ISP, unlike JPEG, like their night mode 1.0. This should provide better detail and a better dynamic range.

In our experience, processing the new Night Mode 2.0 takes twice as much time as its previous version. It stores as many frames as possible in order to understand it, but in the end, we are not sure if this is worth the hassle. Pictures with normal times are already formatted so that you can choose their usefulness after viewing samples of our camera.

No other camera has a night mode, but there is speculation that it will appear in an ultra-wide camera with a future OTA. 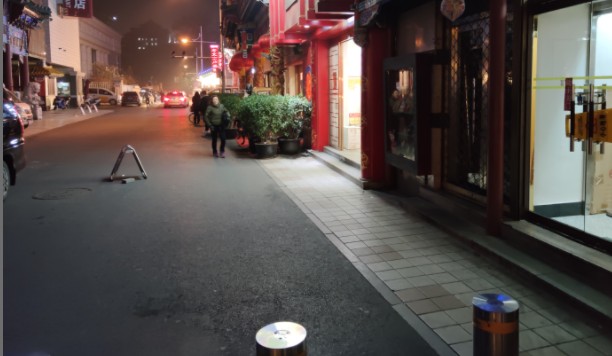 The filling consists of the currently top components. This is the fastest Snapdragon 855 mobile processor, 6 GB of RAM and 64 GB of internal memory. There is another 8 GB of RAM and 128/256 GB of ROM, but they will cost a lot of money, and it is unclear whether it is worth overpaying for them.

Note! Options and some specifications of the Mi 9T Pro may vary by region.

For a complete comparison of all functions, see the table below.

It is expected that this will be the second Xiaomi smartphone, with a 108-megapixel camera. There are also prerequisites that this new product will work on the Snapdragon 730G mobile platform.

Being the Pro version of Mi CC9, the smartphone can have an identical design, and also inherit many technical characteristics. Those. most likely we will see a front panel with a drop-shaped cutout and a fingerprint scanner built into the 6.39-inch AMOLED display.

Perhaps the Pro-cabinet will receive a new MIUI 11 shell, built on the basis of the Android 9 Pie OS, and other characteristics may be as follows:

The fact is that the MICC9 Pro will only be sold in China on time. There are rumors of an international launch under a different name, but we will have to wait to find out more.

However, the key result of today’s event is that Xiaomi doubles the development of cameras with MICC9. It’s not often to have the latest camera designs on a phone that doesn’t even have a flagship processor (or in this case an indecently high price). This is a really interesting point of view that is likely to pay off.

Xiaomi says it has increased its research and development costs for cameras, which is good because it was a sector in which they lagged a bit behind the competition.

As a result, we will look at potentially more interesting camera-oriented Xiaomi devices in the future. And boy, the future cannot come soon enough.