If you believe a variety of current information from different Informers, then discrimination against Samsung Galaxy European fans continues in the second half of the year. While the US, China, and probably also South Korea get the faster Snapdragon 865+, Samsung remains faithful to the unpopular Exynos 990 in the European Galaxy Note20 and Galaxy Note20 Ultra, and possibly also in the Galaxy S20 FE.

|What happened to the beautiful dream of a faster Samsung Exynos 992 or Exynos 991?

Obviously nothing a few weeks before the launch of the Galaxy Note20 series. A few hours ago, the Leaker Ice Universe brought the sad news that Samsung fans in Europe and many other parts of the world obviously still have to put up with the unpopular Exynos 990, discrimination against Americans, Chinese or South Koreans who get the more effective Snapdragon 865 in the Galaxy S20 family.

|The difference with the Snapdragon model should increase:

The fact that this is not just an individual opinion underlines the response of YouTubers, who reported something similar, presumably based on information from a Samsung employee. This is doubly bad news for all European fans of Samsung, because in addition to the repeatedly proven inferiority of the current high-performance SoC Exynos compared to the Qualcomm premium chip, the Galaxy Note20 and Galaxy Note20 Ultra will even be equipped with faster and faster Snapdragon 865+ in terms of features. therefore, the difference in performance, efficiency, and, apparently, also the functions between the Exynos version and the Snapdragon version will increase again with a high probability. 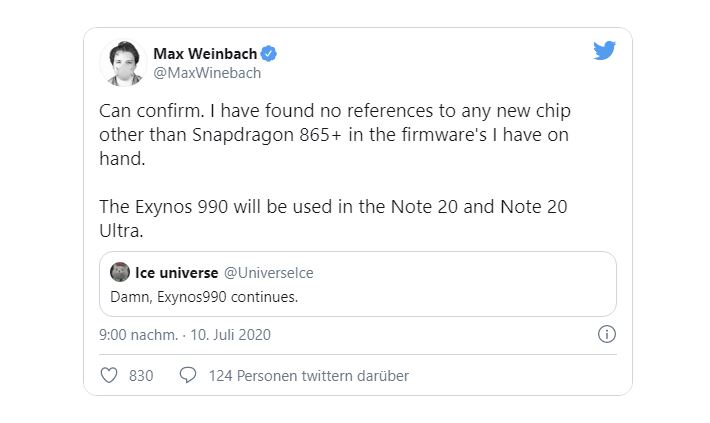 Well-known reader and reviewer of the code Max Weinbach from the XDA Developer Forum confirmed this unpleasant thesis and published a list of all the chipsets supported in OneUI 2.5, as an additional indication, among which there is no new Exynos processor. A great dream of a more efficient and thanks to the Cortex-A78 faster explosion of Exynos 992 or Exynos 991 a few weeks before the launch of the Galaxy Note20 generation, even if another Leaker, see at least the overclocked and optimized version of Exynos 990 in the prospectus. 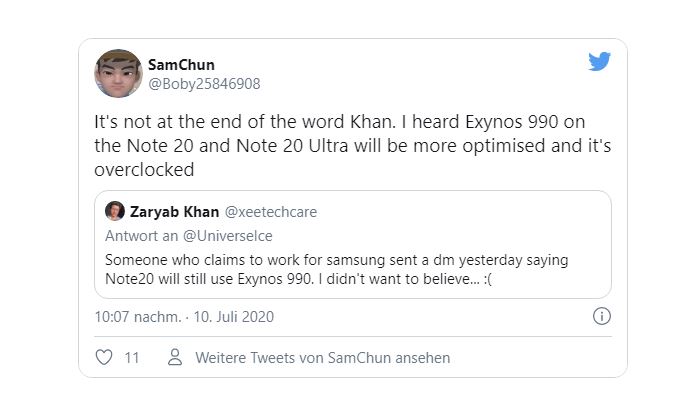 However, the question arises as to why Samsung is not using this opportunity in terms of marketing technologies and poor advertising Exynos 990. Which was even requested, obviously wants to carry along the new Note series. Last year, the Galaxy Note10 (here on Amazon) got a more efficient new Exynos chip compared to the Galaxy S10 (Exynos 9825 vs Exynos 9820). Of course, all these new tips have not been officially confirmed, so Samsung can still get the new chipset out of your hat. But, unfortunately, this doesn’t look right at the moment. Incidentally, this may also affect the Galaxy S20 Fan Edition. Wich is expected in the fall, even if Snapdragon 865+ for Europe is expected recently.