Last month it became known that Instagram plans to abandon the likes counter. This innovation is already tested in Australia, Brazil, Italy, Ireland, New Zealand and Japan. After which it should come to other countries. Now, users’ subscribers will not be able to find out how many likes his photo or video got. Yet, the author of the publication will still be able to see the counter.

As it turned out, many users used it to spy on their partners by tracking their likes. Moreover, many did not even know about the existence of the “Subscriptions”. Not realizing that each “heart” and subscription left became public domain.

Such innovation should allow Instagram users to more post photos and not chase the number of likes. Without a counter, users will not be able to compare themselves with their friends. And feel inferior if their picture has collected fewer “thumbs up” than others. Also, users will stop deleting publications if they feel that they have not won enough approval from friends.

Yet, many Instagram influencers were unhappy with the changes because without likes. They can’t feel the involvement of their audience and understand what content they like.

Blogger Kate Weiland, who became famous for photographs of her family in matching outfits. He said that the publication of a post that did not collect tons of “hearts”, as before, was a disappointment for her. Yet, now she can’t check the interest of her audience in this or that content. How to understand what she liked and what she didn’t, if there are no likes?

“Huskies are motivation. Anyway, at the end of the performance, you don’t hear applause. Now there is only silence and crickets, ”Weiland said in an interview with Business Insider.

“We continue to work so that Instagram is the best platform for contacting people and those things that you like. This work includes both introducing new features and removing old ones that are no longer useful. Starting today, we remove the “Subscriptions” tab. The “You” tab will remain and will now call “Activity” [eng. Activity], ”an Instagram spokeswoman said.
Starting on Monday, the “Subscriptions” tab, or “Following”, will begin to disappear from the Instagram accounts of all photo hosting users. This reported by TechCrunch with reference to a statement from the administration.
If in the “You” tab you can see the likes that other users put to your photos, then in the “Subscriptions” you can see who your friends like.
The fact of unsubscribing from “Subscriptions” was also confirmed by Instagram head Adam Mossery in his twitter account. 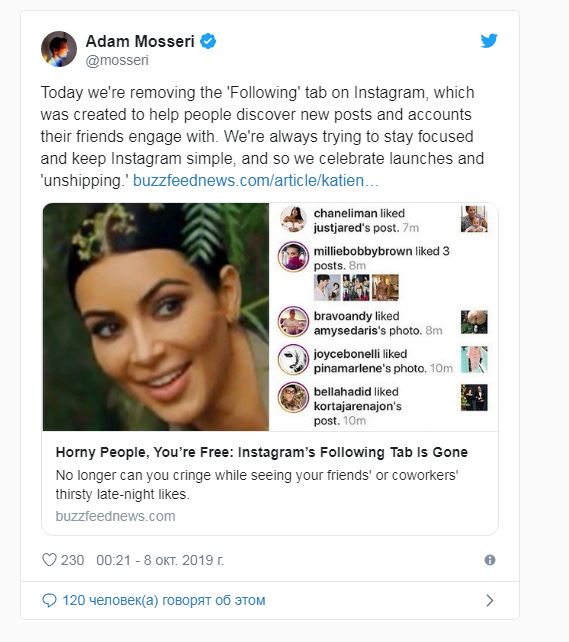 According to TechCrunch, this feature has gained notoriety due to the many cases. Where users have used “Subscriptions” to catch their partners on the so-called “micro-changes”,

Instagram says that they decided to abandon the “Subscriptions” because of their low popularity. Many users did not even know about them. Yet, this fact raises another important question. Many users were not even aware that someone was watching their preferences without their knowledge.

The usefulness of the Subscriptions tab indeed in doubt from the start. it thought that this function would help users find interesting new accounts by their favourite publications the measure for this was subscribers, their likes and hashtags.