Now that the PlayStation 5 design has been revealed, there are two important questions to be answered. What will the PS5 console cost and when will it be delivered?

Another possible mishap on Amazon indicates both the euro price and the release date.

After the PlayStation 5 has already appeared on Amazon in the UK and France. The product page for the new console, including all accessories, is now available online at Amazon Germany. Users use the comment section for tough assumptions.

The supposed price of £ 600 for the PlayStation 5 had already surfaced in the UK last week at Amazon UK. It was briefly listed in France. Instead of the converted 675 euros. The PS5 console shows itself here for the price of 499.99 euros expected by many. But that’s not all, because Amazon.fr also mentions an expected release date. If you trust these entries, which are likely to be put online again incorrectly. The next-gen console from Sony will appear on November 20, 2020.

PS5: After France and the UK now also at Amazon Germany

No, the recently released German Amazon product page for the PlayStation 5 does not contain up-to-date price and availability information. Here, observers and fans can only wait and see what Sony will say about the rumors about the release in November and the price from 500 to 600 euros. With the PlayStation 5 list and all the accessories available for launch, Amazon Germany, like its UK and French affiliates, is currently only creating a placeholder that, among other things, must contact the seller during the search. 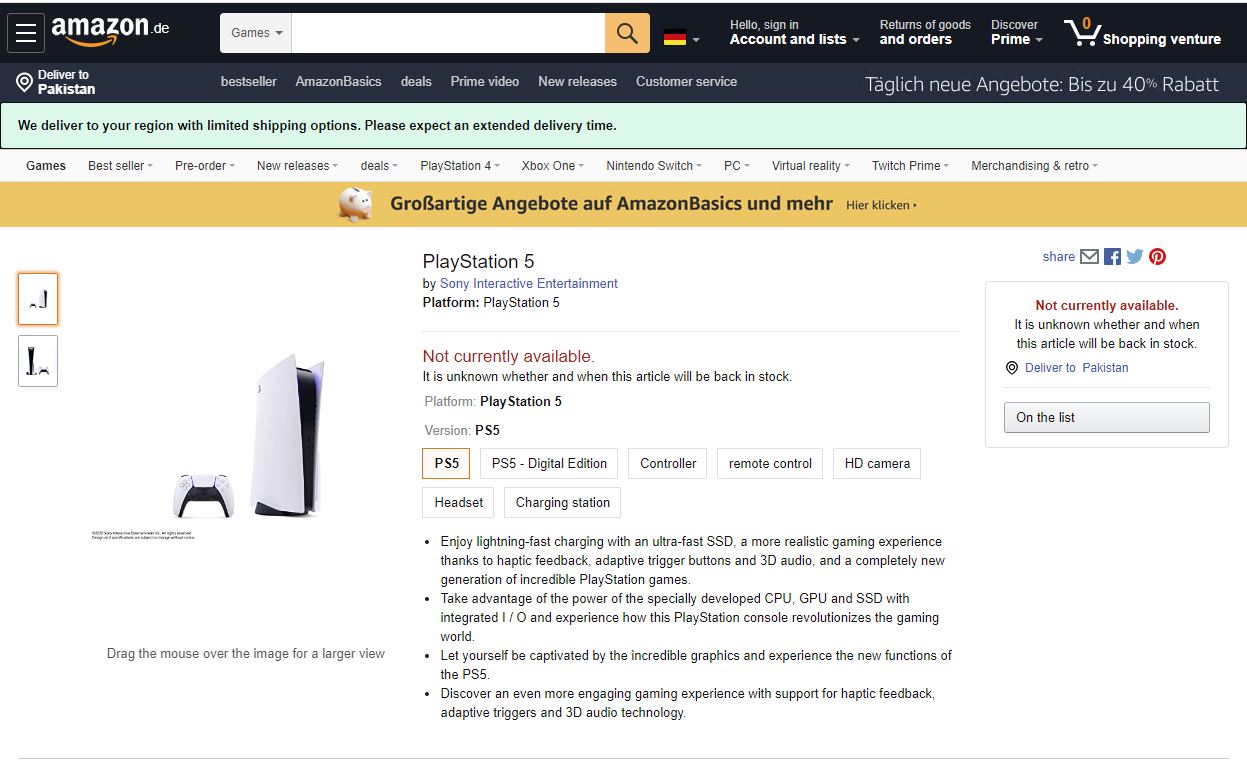 At the moment, all products listed on Amazon Germany are available only at first glance in terms of availability, marked “Currently unavailable” and the addition of “Whether this article will be available again, is unknown.” Below is the entry “Release Date: December 31, 2021” for all products – definitely the wrong placeholder. In addition, the retailer provides the first short texts of the products, which, in addition to more general wordings, such as “Use the performance of specially designed CPUs, GPUs and SSDs”, do not provide any technical details – you can find them in our special PlayStation 5.

The comments section of PlayStation 5.

Since consoles have always been an invitation to heated discussions, there is already a lively exchange of views between different groups of fans in the PlayStation 5 comment section. Questions like “Will there ever be really good games for the Xbox?” make it clear that many do not talk about neutral product discussions. However, some entries are actually dedicated to technical issues – and, of course, the inevitable speculation about price and availability.

The previous Sony PlayStation 4 console became the most popular console of its generation. It has sold over 100 million devices since the start of sales in November 2013. Now the PlayStation 5 must try to update the record, competing with the Xbox Series X. Which is also scheduled for release at the end of the year.