CES Error in AMD: During a keynote, the company acquired images of the new Xbox Series X, not from Microsoft, but from an external service provider. Fake renderings take a first look at the console’s supposed connections.

Chip manufacturer AMD is looking forward to a successful 2020. Not only the increasing popularity of current Ryzen 3000 processors should boost the business properly but also the notebook chips based on the Zen-2 architecture (7nm) that were introduced a few hours ago and a new edition of the Threadripper series.

Likewise, you could both Sony and Microsoft win when it comes to the provision of CPUs and graphics units for the next-gen consoles PlayStation 5 (PS5) and Xbox Series X goes. 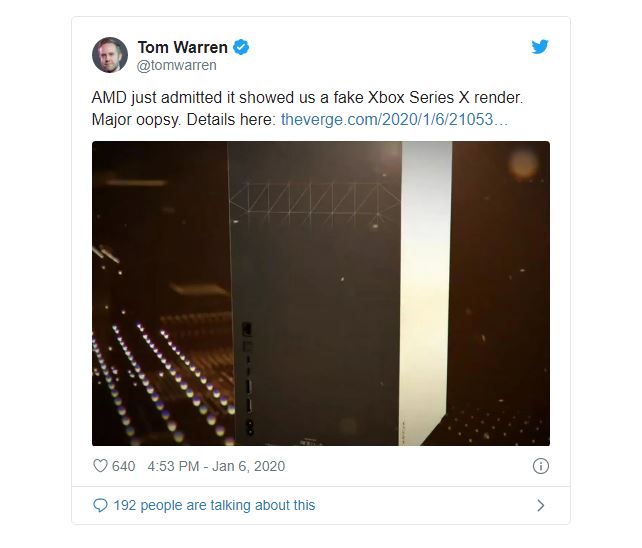 Interfaces of the new Xbox are still unknown

The company wanted to underline this success in its keynote speech at the Consumer Electronics Show ( CES 2020 ) in Las Vegas. The upcoming Xbox Series X including its supposed rear connections was shown in a short one-player.

Microsoft has not yet officially commented on the interfaces. It seemed all the more exciting for console fans to take a first look at Ethernet, HDMI and USB-C ports.

However, AMD took a beating and did not get official images from Microsoft, but used renderings from the TurboSquid website. An AMD representative confirmed to the colleague at The Verge: “The Xbox Series X images used during the AMD CES press conference are not from Microsoft and do not represent the exact design or functionality of the upcoming console.” Thus, the connections of the next-gen console remain a well-kept secret.

Xbox Series X will be released in late 2020

Microsoft plans to launch the Xbox Series X this Christmas. At the heart of the game, the console will be AMD’s Ryzen Zen-2 processors and Radeon GPUs based on the RDNA architecture.

In combination with fast NVMe SSDs and dedicated ray-tracing hardware, the new Xbox should be able to handle 8K resolutions, HDR functions and up to 120 FPS. The targeted performance could a four times higher than that of the current flagship Xbox One X.